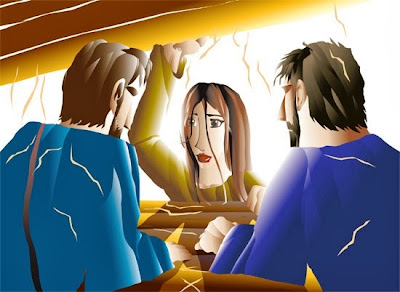 In our series of tutorial group studies of heroes of the Bible and the faith, we have looked in recent weeks at Saint John the Divine, Ananias of Damascus, the Prophet Elijah and the Prophet Daniel.

In the Book of Joshua, Rahab lives in Jericho and helps the Israelites to capture the city. While Rahab’s parents, brothers and sisters are alive at the time, they remain unnamed (see Joshua 2: 13).

The Hebrews are encamped at Shittim, in the Jordan valley opposite Jericho, ready to cross the river. As a final preparation, Joshua sends two spies to investigate the military strength of Jericho.

The spies stay in Rahab’s house, which is built into the city wall. When the city guards come looking for them, Rahab hides the spies under bundles of flax on the roof of her house. It was the time of the barley harvest; flax and barley ripen at the same time in the Jordan valley, so the bundles of flax stalks may have been out drying at the time.

Rahab tells the spies: “I know that the Lord has given you the land, and that dread of you has fallen on us, and that all the inhabitants of the land melt in fear before you. 10 For we have heard how the Lord dried up the water of the Red Sea before you when you came out of Egypt, and what you did to the two kings of the Amorites that were beyond the Jordan, to Sihon and Og, whom you utterly destroyed. 11 As soon as we heard it, our hearts failed, and there was no courage left in any of us because of you. The Lord your God is indeed God in heaven above and on earth below. 12 Now then, since I have dealt kindly with you, swear to me by the Lord that you in turn will deal kindly with my family. Give me a sign of good faith 13 that you will spare my father and mother, my brothers and sisters, and all who belong to them, and deliver our lives from death” (Joshua 2: 9-13).

The spies promise to spare Rahab and her family when they capture the city, even if there is a massacre, if she marks her house by hanging a red cord from the window. Some have claimed that the symbol of the red cord is related to ‘scarlet women’ and ‘red-light districts’.

So, when Jericho falls, Rahab and her family are preserved in keeping with the pledge given by the spies, and become part of the Jewish people (Joshua 6: 17-25).

The Talmud says Rahab of Jericho marries Joshua bin Nun, a descendant of Joseph, and that Rahab and Joshua are the ancestors of Huldah, Jeremiah, Ezekiel and other prophets.

Josephus describes Rahab as an innkeeper, but he is silent about whether renting rooms is her only source of income (see Antiquities of the Jews 5.1.2). The mediaeval Jewish commentator Rashi says she was a food-seller in the market in Jericho.

Rahab in the New Testament: 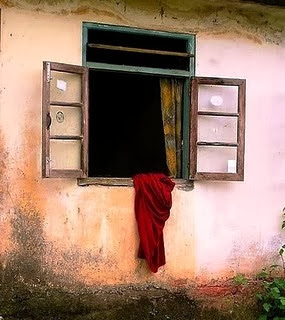 Almost all English translations of Joshua describe her as a harlot or a prostitute. In addition, in the New Testament, both the Epistle to the Hebrews and the Epistle of James follow the tradition in the Septuagint in using the Greek word πόρνη (pórne), which is usually translated in English as ‘harlot’ or ‘prostitute,’ to describe her. It usually describes a woman who sells her body for sexual uses, a prostitute, a harlot, one who yields herself to defilement for the sake of gain, or any woman indulging in unlawful sexual intercourse, whether for gain or for lust. But it is also used in Greek as a metaphor for woman who is an idolater or engaged in idolatry.

Rahab (Ῥαχάβ or Ῥαάβ) is mentioned three times in the New Testament.

In Saint Matthew’s Gospel, Ῥαχάβ is named as one of the ancestors of Jesus (Matthew 1: 5). She marries Salmon of the tribe of Judah and is the mother of Boaz. Thus Rahab who marries Salmon is the ancestor of King David, all the kings of Judah, and of Jesus.

Rahab is also referred to twice in the New Testament epistles – as an example of a person of faith (Hebrews 11: 30-31) and as a person of good works (James 2: 24-26). In both instances, she is named as Ῥαάβ and her name is linked with the term prostitute:

30 By faith the walls of Jericho fell after they had been encircled for seven days. 31 By faith Rahab the prostitute did not perish with those who were disobedient, because she had received the spies in peace. (Hebrews 11: 30-31).

24 You see that a person is justified by works and not by faith alone. 25 Likewise, was not Rahab the prostitute also justified by works when she welcomed the messengers and sent them out by another road? 26 For just as the body without the spirit is dead, so faith without works is also dead. (James 2: 24-26).

Is Rahab a prostitute?

Both the Hebrew Bible and Josephus agree that Rahab is a successful business woman who makes fine clothing and keeps an inn, and she is called an innkeeper, not a harlot. So why is she described as a prostitute in the Septuagint and in the New Testament? Is it because of her success in business? Or is it because she engages in the deceit of men?

Yet, if a common Canaanite prostitute could become an uncommon saint of faith and courage and receive the privilege of motherhood among the ancestors of Christ, then surely nothing is impossible with God. Rahab’s amazing story is a lesson for us all.

Rahab is the only resident of Jericho who resolves to fear and obey the God of Israel. She does so even before she has the opportunity to interact with the spies. Although the Canaanites had many gods, she realises the God of Israel is no ordinary Canaanite deity.

When the spies enter Jericho, they immediately confer with Rahab, and this conversation reveals her understanding of the true God and her determination to help the people. When the king of Jericho hears that spies have entered his city, he immediately suspects Rahab, for he sends soldiers to her house. But word gets to Rahab that the king’s men are coming to investigate her and her two visitors.

Rahab quickly hides the spies under the flax that is drying on her roof. Here a covenant is made: she saves them and helps them to safety; they, in turn, are to save her and her family. So, although the walls of Jericho fall, Rahab’s house which is built into the wall is left standing.

Rahab is one of two women named in Hebrews 11 as examples of godly faith. The other is Abraham’s wife, Sarah. It is obvious why Sarah is named, I suppose. But why is Rahab named?

In her weakness, Rahab is made strong in faith.

Rahab states confidently: “I know that the Lord has given you the land, and … as soon as we heard it, our hearts failed, and there was no courage left in any of us because of you. The Lord your God is indeed God in heaven above and on earth below” (Joshua 2: 9-11). Rahab lives by faith for – although she has seen none of these events – she believes that God is more powerful than all others and is going to take care of her and her family. Her faith gives her the courage to look death in the face … and she lives. Courage is born from unwavering faith, as Rahab shows. Her example demonstrates living faith in a forgiving and merciful God.

Considering the destruction that is about to befall Jericho, Rahab could easily think only of her own safety, ignoring the welfare of others. Yet her agreement with the spies guarantees not only her safety but the safety survival of her entire family. Rahab’s faith, courage and concern for others saved her family and herself.

Rahab in the plan of salvation

With the shadow of death and destruction over Jericho, Rahab extracts a promise from Joshua’s spies not only to spare her, but also all those bound to her by human and familial ties. While her life of sin and shame may have once estranged her from her family, self-safety is not her sole consideration in her request. She desires all her loved ones to share in this form of salvation.

Rahab’s story represents what God has in store for all the nations, who are also promised God’s salvation (see Acts 2: 21; Romans 9: 22-26). Her conversion is a reminder that one day God will write his laws on the hearts and minds of all peoples, all humanity (Hebrews 8: 11).

The other gentile women who are counted among the ancestors of Christ are Tamar, Ruth and Bathsheba. These three are also sinful women who are forgiven by God, and who have their share in the royal line from which Christ springs.

Jerome, in his comment on the inclusion of these four foreign women in Saint Matthew’s genealogy, says: “In it none of the holy women are included, only those whom the Scriptures blame, in order that He who came in behalf of sinners, Himself being born of sinners, might destroy the sins of all.”

She witnesses to a remarkable understanding of the sovereignty of the true God for she says to the spies: “I know that the Lord has given you the land, and … as soon as we heard it, our hearts failed, and there was no courage left in any of us because of you. The Lord your God is indeed God in heaven above and on earth below” (Joshua 2: 9-11).

In Rahab’s mind, no matter how faintly she understands, there is a distinct call from God. Her faith in God who works miracles leads to her confession of God’s power and purpose.

What the Bible commends is not her deception, but the faith which was the mainspring of her conduct.

Rahab is the only woman besides Sarah who is designated as an example of faith in the great cloud of witnesses. The one-time prostitute now ranks alongside Enoch, Noah, Abraham, Joseph, Moses and David.

In England, the Rahab Project offers support, befriending and advocacy to anyone exploited in the sex industry, such as prostitution, trafficking, or sex work. Much initial contact with potential clients who work on-street is made during their Night Outreach Teams. Self-referrals and referrals from social services are another route as the Rahab Project also supports anyone working off-street in places such as massage parlours, brothels, or who is self-employed or lone working.

Day-time support varies, including prison and hospital visits, food and clothes parcels, advocacy at health or drug appointments and court support. All of it is about valuing the person, enabling them to access services and grasp new opportunities. Their Christian ethos is foundational in framing the support offered.

Can you see how the scarlet line, because of its colour and sign of safety, speaks of the sacrificial work of Christ (Hebrews 9: 19, 22)?

Do we make Rahab’s prayer for the salvation of her family the prayer for our own families?

Can we compare Rahab, the scarlet woman who dyes her linen, with Lydia the seller of purple?

Why is Rahab described as a prostitute in the Book of Joshua?

Have you a problem with Rahab lying to protect the spies in hiding (see Leviticus 19:11; Proverbs 12:22)? Remember, of course, that Rahab is commended for her faith, not her lying, and she has not yet grown in that faith, does not yet fully understand the implications of her past way of life. Yet, her works are a natural response to her faith, and she acts in the way she knows best.

Canon Patrick Comerford is Lecturer in Anglicanism, Liturgy and Church History, the Church of Ireland Theological Institute, and an Adjunct Assistant Professor, Trinity College Dublin. These notes were prepared for a Bible study in a tutorial group with MTh students on 13 November 2013.