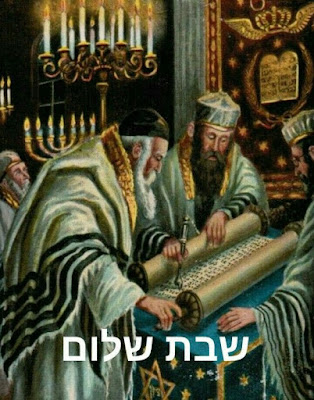 The Jewish holiday of Shavuot or Shavuos (שָׁבוּעוֹת‎, ‘Weeks’) begins at sunset tomorrow evening (Saturday 4 June 2022), and ends at sundown on Monday (6 May 2022).

The Feast of Weeks is sometimes referred to as Pentecost (Πεντηκοστή) because of its timing 50 days after the first day of Passover. This year, it coincides with the Christian celebrations of Pentecost (Sunday 5 June 2022)

This evening (3 June 2022) is the beginning of the Shabbat before Shavuot, when the memorial prayer ‘Father of compassion’ (אב הרחמים‎, Av Harachamim) is said in many synagogues and congregations.

The prayer emphasises the merit of the martyrs who died and quotes several scriptural verses: Deuteronomy 32: 43; Joel 4: 21; Psalm 79: 10; Psalm 9: 13; Psalm 110: 6, 7. God is asked to remember the martyrs, to avenge them, and to save their offspring. The wording of the last part of the prayer, invoking Divine retribution on the persecutors, has undergone many changes.

On first reading or hearing this last part of the prayer, it sounds like a call to violence. But it is nothing of the sort. Like so many of the psalms, it turns to God in honesty and despair, and lays honest feelings before God. But as we pray, of course, we realise that God is the God of both peace and justice.

The prayer is recited after the Torah reading and before the scroll is returned to the Ark. Another short prayer of the same name, ‘May the Father of mercy have mercy upon a people that has been borne by him …’, is recited in Orthodox synagogues immediately before the reading from the Torah.

And it also says:

‘For the Avenger of blood remembers them
and does not forget the cry of the afflicted.’

And it further says:

‘He will execute judgment among the nations,
heaping up the dead,
crushing the rulers far and wide.
From the brook by the wayside he will drink,
then he will hold his head high.’

The Hebrew inscription at the entrance to the Stadttempel, Vienna’s main synagogue, reads: ‘Enter his gates with thanksgiving and his courts with praise’ (Psalm 100: 4) (Photograph: Patrick Comerford)

Before this day begins, I am taking some time this morning to continue my reflections in this season of Easter, including my morning reflections drawing on the Psalms.

Psalm 100 is sometimes known by its Latin name Jubilate Deo, and is familiar by this name to many Anglicans as a Canticle. In the slightly different numbering system in the Greek Septuagint and Latin Vulgate, this psalm is counted as Psalm 99.

As the Canticle Jubilate Deo, Psalm 100 is one of the psalms said or sung as a Canticle at Morning Prayer in the Book of Common Prayer.

Psalm 100 is a psalm of thanksgiving that invites all people on earth to joyfully worship God. It accompanied the korban todah, a thanksgiving offering (see Leviticus 7: 11) brought to express gratitude for coming safely through a hazardous situation such as recovering from illness, completing a potentially dangerous journey, or being released from captivity. In Jewish tradition today, the HaGomel blessing, which is said after surviving illness, childbirth or danger, is made instead of the korban todah sacrifice.

All are to acknowledge that the Lord God is our creator, that all of us belong to him and that he cares for us. He is ultimate goodness, and his love for us is ever-lasting, for all generations, including to those who went before us, and to those who follow us.

Psalm 100 first appeared as part of Jewish daily prayer in Yemenite and French prayer books in the Middle Ages.

This psalm is one of the fixed psalms and canticles in the older Anglican liturgy for the office of Lauds on Sundays, and as a part of Morning Prayer in the Book of Common Prayer as the canticle with the title Jubilate Deo.

Vaughan Williams wrote his triumphant setting for Psalm 100 in 1953 for SATB, congregation and full orchestra, organ with brass fanfare, and it was first performed on 2 June 1953 in Westminster Abbey at the coronation of Queen Elizabeth II. The order of service that day directed just before the Holy Communion:

This setting by Vaughan Williams was sung again at a National Service of Thanksgiving to celebrate Queen Elizabeth’s Diamond Jubilee in Saint Paul’s Cathedral on 5 June 2012.

Ever since the coronation in 1953, the stirring grandeur of Vaughan Williams’s setting of ‘The Old Hundredth’ has been a familiar component of many large-scale state and national occasions. It was originally scored for Full Orchestra, Organ, Choir and Fanfare Trumpets, with Vaughan Williams setting the fanfares for “all available trumpets,” which ring out to introduce the first and last verses. It is without doubt the most thrilling setting of this much-loved hymn.

The Genevan Psalter was compiled over a number of years in response to Calvin’s teaching that communal singing of psalms in the vernacular language is a foundational aspect of church life. This contrasted with the prevailing Catholic practice at the time in which sacred texts were chanted in Latin by the clergy only.

Calvinist musicians, including Bourgeois, supplied many new melodies and adapted others from sources both sacred and secular. The final version of the psalter was completed in 1562. Calvin intended the melodies to be sung in plainsong during church services, but harmonised versions were provided for singing at home. 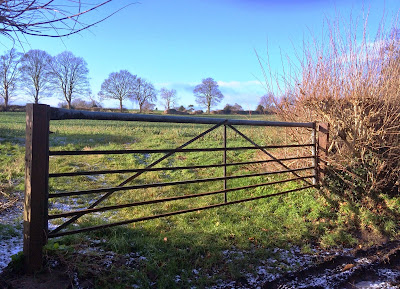 ‘Enter his gates with thanksgiving’ (Psalm 100: 4) … a farm gate at Cross in Hands Lane, on the edges of Lichfield (Photograph: Patrick Comerford)

A Psalm of thanksgiving

1 Make a joyful noise to the Lord, all the earth.
2 Worship the Lord with gladness;
come into his presence with singing.

3 Know that the Lord is God.
It is he that made us, and we are his;
we are his people, and the sheep of his pasture.

4 Enter his gates with thanksgiving,
and his courts with praise.
Give thanks to him, bless his name.

5 For the Lord is good;
his steadfast love endures for ever,
and his faithfulness to all generations.

The USPG Prayer Diary this morning (3 June 2022) invites us to pray:

Let us pray for the children and young adults who have grown up during the Covid-19 pandemic. May we help them to navigate this uncertain and difficult time.