A blustery day on the beach in Bettystown 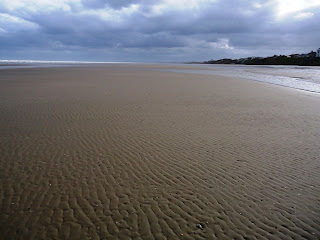 The long stretch of sand from Mornington to Laytown on the coast of Co Meath ... almost deserted in the chilly afternoon (Photograph Patrick Comerford, 2013)

It’s been a busy weekend, working each day with part-time students who have been in for a residential weekend over three days. It’s always a joy to work with them, and we finished at mid-day with a celebration of the Eucharist and Mothering Sunday.

It has turned bitterly cold, but two of us still headed out at lunchtime for a walk on the beach in Bettystown, Co Meath, stopping on the way at Gormanston to enjoy a field of daffodils that are about to bloom. 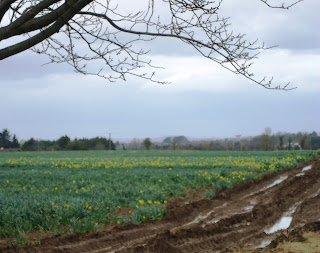 A field of daffodils waiting to open in Gormanston, Co Meath, this afternoon (Patrick Comerford, 2013)

The weather forecasters are warning about the possibility of snow overnight, the chill factor made the air feel colder than it must have been, the strong wind was blowing in from the north-east against us, the brown waves were churning in onto the beach, and the sound of the waves and water was echoing all along the beach.

A small group of three failed dismally but cheerfully to raise a kite, a handful of people were out walking on their own or with their dogs. But the only sound interrupting the echoes of the rising and falling waves were two cars using the expanse to try their handbrake turns – I still find it unfathomable that Meath County Council allows cars onto this wide, unspoilt expanse of golden sand. 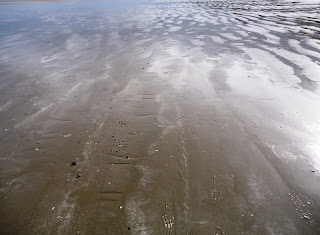 Ripples on the sand in Bettystown this afternoon (Photograph: Patrick Comerford, 2013)

After a brisk – but short – walk, we collected the Sunday newspapers in Donovan’s supermarket and retreated to Relish, where we had booked a table for two at 3. I can always recommend this restaurant ... for its views, its food and for the attention from those who work there. It was typical of that attention that there was a welcoming glass of prosecco to mark Mother’s Day. 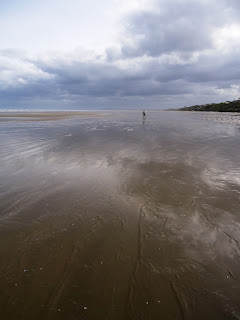 We lingered a little by the window with a picture-frame view down onto the beach. On the journey back we stopped at Laytown, and once again north of Skerries, beneath the slopes of Ardgillan Castle, to view those choppy, churning brown and white waves.

Walking down to the beach in Laytown, Co Meath (Photograph: Patrick Comerford, 2013)

It seems like a long time since I have been in Skerries. We drove along the Harbour, and up around Red Island, and then headed out through Rush and Donabate to Portrane, where stopped for about an hour.

The three bunches of daffodils from Gormanston are in a jar of water before me. They should be open within a few days. But will Spring be with us by then? 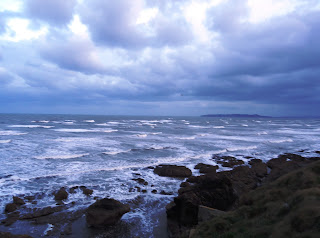 With the Saints in Lent (26), The Forty Martyrs of Sebaste and the Fourth Sunday in Lent, 10 March 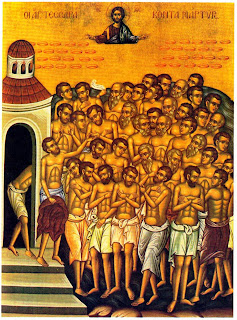 This confusing array defeats the purpose of a common, shared lectionary that seeks to have the same passages of Scripture being read in all churches on a given Sunday. Is your church marking today as Mothering Sunday or as the Fourth Sunday in Lent?

In the Calendar of the Orthodox Church, today [10 March] is the feastday of the Forty Martyrs of Sebaste , and this feastday is intentionally placed not just immediately after Saint Gregory of Nyssa [see 9 March], whose faith is closely linked to Orthodox respect for these martyrs, but so that it will fall during Great Lent.

Holding this feastday during Lent involves an intentional play on the number forty being both the number of martyrs and the number of days in the Lenten fast. Today’s feastday also falls during Great Lent so that the endurance of the martyrs serves as an example to Christians to persevere to the end in order to participate in the Resurrection of Christ, which is the fullness of the Easter faith.

A prayer mentioning the Forty Holy Martyrs of Sebaste also plays a part in the Orthodox Wedding Service, in which the wedding crowns also remind the bride and groom that spiritual crowns await them also if they remain as faithful to Christ as these saints of the past.

I mentioned yesterday [9 March] how, when Saint Gregory of Nyssa was 20, some of the relics of the Forty Martyrs of Sebaste were transferred to a chapel near his home, and that their presence made a deep impression on him, confronting him with the fact that to acknowledge God at all is to acknowledge his right to demand a total commitment.

The Forty Martyrs of Sebaste or the Holy Forty (Ἃγιοι Τεσσεράκοντα, or Άγιοι Σαράντα) were a group of Roman soldiers in the Legio XII Fulminata (The Twelfth Legion, Armed with Lightning), They were martyred in the year 320 near the city of Sebaste in Lesser Armenia (present-day Sivas in Turkey). They were victims of Licinius, who persecuted Christians in the Eastern Empire after the year 316.

The earliest account of these martyrs is given by given by the Cappodocian Father, Saint Basil, Bishop of Caesarea (370–379) and brother of Saint Gregory of Nyssa. His sermon was preached on 9 March, the feastday of the Forty Martyrs, 50 or 60 years after they were martyred.

According to Saint Basil, forty soldiers who had become Christians were condemned by the prefect to be exposed naked upon a frozen pond near Sebaste on a bitterly cold night, so that they would freeze to death. One among the forty weakened that night and left his companions, seeking the comforts of the warm waters of the baths near the lake.

At this moment, however, one of the guards keeping watch over the martyrs saw a supernatural bright light shining over them. At once he declared that he too was a Christian. He threw off his clothes, joined the other 39 in the frozen pond, and brought their number back up to forty.

At dawn, the stiff and frozen bodies of the forty, which still showed signs of life, were taken from the pond, burned and the ashes thrown into a river. However, Christians, collected their precious remains, and their relics were distributed throughout many cities.

The distribution of the relics meant the veneration of the Forty Martyrs became widespread, and many churches were built in their honour. One of these churches was built in Caesarea, in Cappadocia, where Saint Basil later preached his sermon on the Forty Members.

The Menaion of the Eastern Orthodox Church names the Forty Martyrs as follows:

The early Church Historian Sozomen (ca 300-ca 350) provides an account of the relics being founds in Constantinople, in the shrine of Saint Thyrsus.

In Byzantine iconography, the Forty Martyrs are typically represented as they are about to freeze to death, “shivering from the cold, hugging themselves for warmth, or clasping hands to their faces or wrists in pain and despair.” 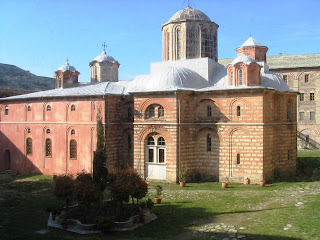 The Church of the Forty Martyrs, the katholoikon or main church in Xeropotamou Monastery on Mount Athos

The Forty Martyrs of Sebaste are venerated throughout the Eastern Church. Churches dedicated in their honour include the katholoikon or main church in Xeropotamou Monastery on Mount Athos, the Armenian Cathedral in Aleppo, Syria, and the 13th-century Church of the Holy Forty Martyrs in Veliko Tarnovo, Bulgaria. The Church of Santa Maria Antiqua in the Roman Forum has a chapel dedicated to the Forty Martyrs.

O Almighty God, by whose grace and power your holy martyrs of Sebaste triumphed over suffering and were faithful even unto death: Grant us, who now remember them with thanksgiving, to be so faithful in our witness to you in this world, that we may receive with them the crown of life; through Jesus Christ our Lord, who lives and reigns with you and the Holy Spirit, one God, for ever and ever.

You abandoned all earthly armies,
Cleaving to the heavenly Master, O Forty Martyrs of the Lord.
Having passed through fire and water, O Blessed Ones,
You have fittingly received heavenly glory and many crowns.