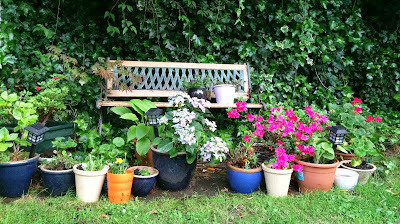 The promise of summer in the colours of the garden (Photograph: Patrick Comerford, 2014)

It seems every lamppost, every pillar, every post-box, every length of railings and every set of traffic lights in this constituency has been hijacked for the display of election posters.

It may not be vandalism, but it certainly adds up to ugly and wanton littering. Few of them want to tell me what they would actually do, and instead most of them are telling me what they want me to think they think they look like.

But, despite this loutish littering – which is inflicted by all parties and none – nothing can take away from the joy and beauty of the sunshine that has bathed this part of Dublin for the past two days.

The weather forecasters say this sunshine is going to go as fast as it arrived. But for the past few days it has been a joy. The dawn chorus is beginning earlier and earlier each morning, and the evenings are lingering longer as each day comes to a close.

Since my return from Lichfield, I have had a busy week, helping to launch a new book in Whitechurch Parish, and reading, marking, learning and inwardly digesting essays, assignments and dissertations.

But there were a few moments in the sunshine each day, with dinner in the garden last night and a barbeque on the lawn this evening.

I remember childhood days when these were irritating weeks, clouded by hay fever, with itching eyes and ears, a blocked nose and throat and sometimes irritated blotches and patches on my skin. There was little understanding of hay fever in the 1950s and early 1960s, and less sympathy for it. It was difficult for a boy to be stuck inside, reading and painting in my grandmother’s farmhouse, while others of my age were out playing in the fields and the barns and by the river. 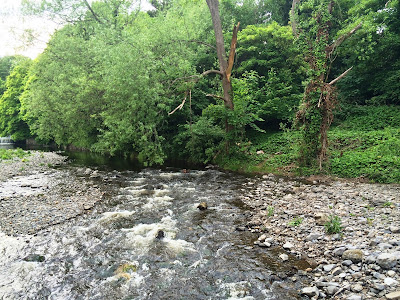 Scenes of summer by the River Dodder in Rathfarnham this evening (Photograph: Patrick Comerford, 2014)

I still suffer from hay fever at this time of the year, and it probably adds to the problems created for my lungs and my breathing system by the symptoms of sarcoidosis. But perhaps I am coping better these days, and now I enjoy the early summer feeling that comes in with May. The days are longer, the skies are blue, the air is warmer, and the colours are brighter.

Last Monday’s afternoon walk along Cross in Hand Lane, though the fields and farms in the countryside north of Lichfield, was one of those moments when I catch a glimpse of heaven and feel blessed by the beauty and riches of God’s creation. 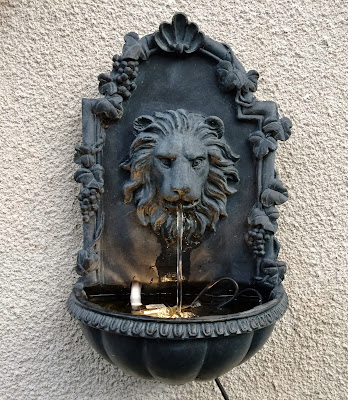 Last night, I sat in the garden until the evening lights had faded, enjoying the lingering feelings of sunshine and listening to the sound of water dripping gently from the lion’s mouth in a small fountain.

This morning began with breakfast with students in a restaurant in Churchtown. After this evening’s barbeque, I walked home along the banks of the Dodder in the Rathfarnham, where a few were fishing, and a mother and child were feeding a swan at the top of the weir and some ducks.

As the evening lights began to fade, there was an almost rustic appearance by the river bank. The promises of summer are something no politician can hold out at election time. If I finish early tomorrow afternoon I may even go for a walk on a beach. 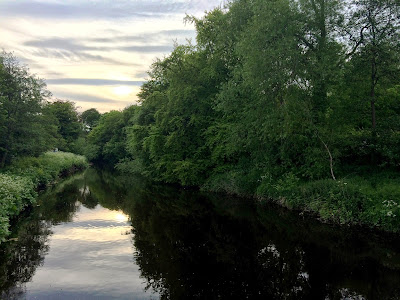 The promises of summer on the River Dodder in Rathfarnham this evening (Photograph: Patrick Comerford, 2014)

Posted by Patrick Comerford at 22:26 No comments: