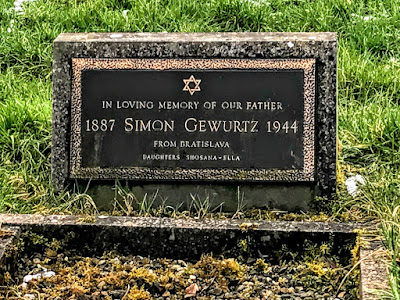 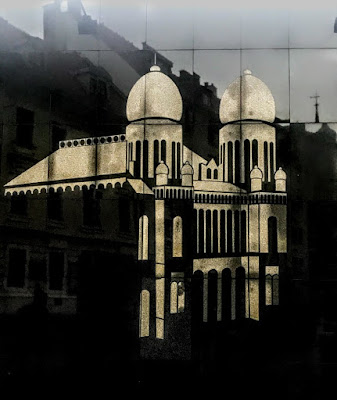 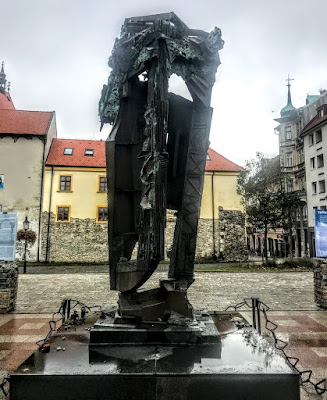 How many people can tell
Slovakia from Slovenia, or
Bratislava from Breslau? 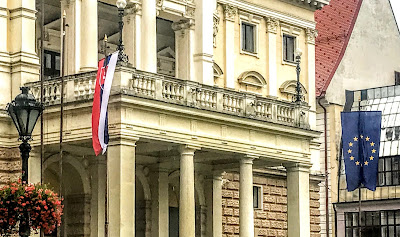 The flags of Slovakia and the European Union flying outside the Opera House in the heart of the old city of Bratislava (Photograph: Patrick Comerford, 2019)

I was in Prague, the capital of the neighbouring Czech Republic, earlier this year [22-25 January 2019], and I have passed through Prague Airport at least four times before (2005-2007) on way to and from Romania. But this is my first visit to the other republic and to the other capital of the former Czechoslovakia.

While I was visiting Venice this time last year [5-9 November 2018], I paid a brief visit to Gorizia or Gorica, a city that straddles the borders of Italy and Slovenia. But it is surprising that many people do not know their Slovakia from their Slovenia.

Although Bratislava – particularly this part of the city – is centuries old, Bratislava has only been known by its present name for the past 100 years. Until 1919, it was mostly known in English by its German name, Pressburg, and sometimes by its Hungarian name, Pozsony.

The new name caused much confusion a century ago, because Wrocław, which is now in western Poland, was known in German as Breslau, in Czech as Vratislav and in Latin as Vratislavia, as its political status shifted between Poland, Bohemia, Hungary, the Austro-Hungarian empire, Prussia, Germany and Poland again.

Journalists were confused last year when the Prime Ministers of Slovenia and Slovakia resigned in the same week. But the confusion between Slovakia and Slovenia has existed since the 1990s, when they became two of the newest countries in Europe.

Symbols of Slovakia in a souvenir shop in the centre of the old town in Bratisalva (Photograph: Patrick Comerford, 2019)

Slovakia and Slovenia have similar names, similar flags, and a similar history. Slovakia calls itself Slovenská Republika, while Slovenia is Republika Slovenija. One language is known its speakers as Slovenčina, the other as Slovenščina, a letter rather than a word or a world of difference. To their residents, these countries are known as Slovensko and Slovenija; and among those residents, Slovenka in Slovak means a Slovak woman; Slovenka in Slovene means a Slovene woman.

The flags of these two countries are almost identical, with white, blue and red horizontal stripes and a heraldic shield displaying mountain peaks. The wrong flag is often flown, and the wrong anthem is often played at international sporting fixtures.

I wonder whether Donald Trump is ever confused? Melania Trump was born in Slovenia, while Ivana Trump was born in what was then Czechoslovakia. There is more than awall that separates the two; indeed they are separated by a whole country, Hungary.

By the end of this week, I am sure, I am not going to be able to imagine how anyone could be confused. 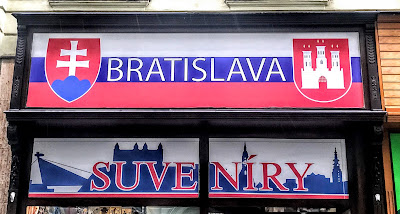 Flying the Slovak colours … a souvenir shop in the centre of the old town in Bratisalva (Photograph: Patrick Comerford, 2019)