The heart-breaking stories of the Jews of Thessaloniki 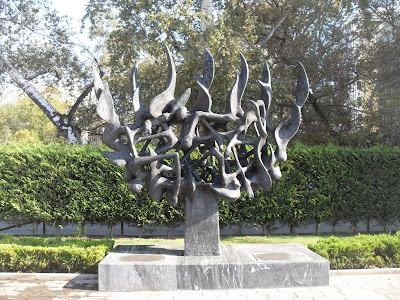 The Jewish Holocaust Memorial on Platia Eleftherias near the port in Thessaloniki ... in July 1942, all the men in the Jewish community aged from 18 to 45 were rounded up in this square for deportation (Photograph: Patrick Comerford, 2011)

I am staying in Thessaloniki in the Egnatia Hotel, a block away from the city’s last surviving synagogue and a short walk from the city’s sensitively-presented Jewish Museum. Nearby too is the sprawling and bustling Modiáno central market, named after a wealthy Jewish family who had the foresight and vision to build it.

Until 1942, Thessaloniki had no Jewish ghetto. This is no ordinary city when it comes to Jewish history, for the story of the Jews of Thessaloniki dates back more than 2,000 years, and the city was home to a major Jewish community, mostly of Sephardic origin, until the middle of World War II.

Thessaloniki is the only major city of this size to have had a Jewish majority for centuries. For at least two centuries, this city was the largest Jewish city in the world, and was known as the “Mother of Israel.” Many non-Jewish people in Thessaloniki also spoke Ladino, the Romance language of the Sephardic community, and the city virtually ground to a stop on Saturdays. The city even had its own unique sect of Jews, the Dönmeh or Sabbateans, followers of Sabbatai Zvi, who converted to Islam and built their mosques in the style of synagogues.

The 2,000 years or more history of this community dates back to at least the year 140 BC, when the first Jews are recorded in the city. In early Christian times, the Apostle Paul, in his first letter to the church in Thessaloniki (I Thessalonians), mentions Hellenised Jews in the city about 52 CE.

By the early mediaeval period, Benjamin of Tudela reported that there were 500 Jews in Thessaloniki in 1170. A small Jewish population continued to live here during the Byzantine period, but it has left no records, and the Jewish population was still small when the Ottoman Turks captured Thessaloniki.

When the Ottoman Turks captured Thessaloniki in 1430, they turned the city’s churches into mosques, and drove the city into sharp decline. But the city’s Muslim and Jewish population grew. In 1478, there were 4,000 Muslims, 6,000 Greek Orthodox, a handful of Catholics, and a tiny, ancient Greek-speaking or Romaniote Jewish community. But in the decades that followed, the Sephardic Jews expelled from Spain by Ferdinand and Isabella in 1492 were warmly welcomes, and this new community influenced the Sephardic world culturally and economically so that the city became known as the “Mother of Israel.”

The Ottoman Empire protected the Jews as dhimmis, but the invitation to the expelled Jews may have been a strategy to prevent ethnic Greeks from dominating the city. The first Sephardim who arrived from Majorca in 1492 were “repentant” returnees to Judaism after their earlier forced conversion to Catholicism. They were soon joined by Castilians and Sicilians, and then by Jews from Aragon, Valencia, Calabria, Venice, Apulia, Naples and Provence. 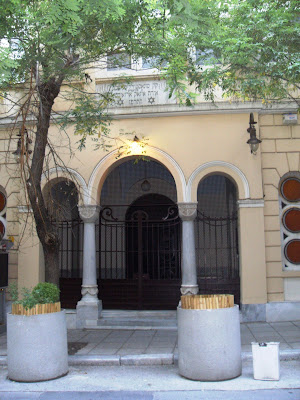 Monastiriotin Synagogue on Syngrou Street is the only synagogue in Thessaloniki to have survived after World War II (Photograph: Patrick Comerford, 2011)

In mid-16th century, Jews from Portugal also sought refuge in Thessaloniki. Soon, they were joined by small numbers of Ashkenazim from Austria, Transylvania and Hungary. The Jewish community grew rapidly, and by 1519 numbered over 15,500 or almost 55% of the city population; by 1613, they were 68%. Throughout the 16th century, they enjoyed a “Golden Age.” Each new group brought its own rites and rituals and founded its own synagogue: the Katallan Yashan (Old Catalan) was founded in 1492; the Katallan Hadash (New Catalonia) started at the end of the 16th century.

In 1651, a young and brilliant rabbi, Sabbatai Zevi, arrived from Smyrna in Thessaloniki, proclaiming himself the messiah, but with a reputation too as a scholar and a Kabbalist. He found a great number of followers among the Shalom Synagogue, many of them former marranos. 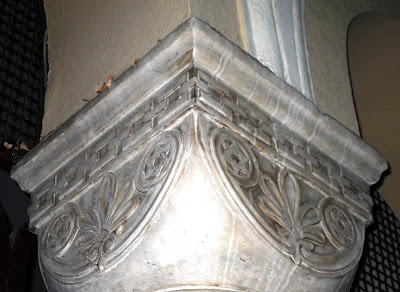 Stars of David on the top of a column in the portico of the Monastirioton Synagogue (Photograph: Patrick Comerford, 2011)

Sabbatai Zevi caused a scandal when, during a solemn banquet in the courtyard of the Shalom Synagogue, he defied Jewish piety by pronouncing the Tetragrammaton, and claimed he was the Messiah, the Son of David. The rabbinical courts drove him out, but his presence so divided Thessaloniki’s Jewish community that he was called before the sultan and jailed. Unable to prove his supernatural powers, he relented and converted to Islam.

Many of his followers, the Dönmeh or Sabbateans, converted to Islam. Although some returned to Judaism, about 300 of the richest Jewish families in the city decided to embrace Islam in 1686. They later divided into three groups – Izmirlis, Kuniosos and Yacoubi – forming forming a new religious community in Thessaloniki. However, they never assimilated with the Turkish Muslims, and instead married within their own community, lived in separate quarters, built their own mosques that retained many elements found in synagogues, and developed a liturgy in their own language. 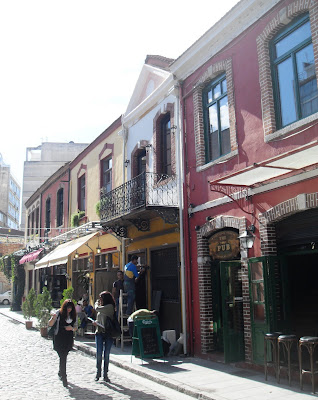 A colourful street front in Ladidaka, once a Jewish district in Thessaloniki (Photograph: Patrick Comerford, 2011)

The Jews of Thessaloniki enjoyed a revival in the mid-19th century with the arrival of French and Italian Jews who were influential in education. They brought contemporary ideas from Europe that changed the Jewish culture of the city. With this rapid economic growth from 1870, members of the Jewish community built elegant Renaissance-style and neo-classical villas and mansions that line Vassilis Olga Avenue.

When Thessaloniki was incorporated into the modern Greek state in 1912, the city’s Jews acquired full citizenship. At first, the change of sovereignty was not well-received by them, and some Jews sought the internationalisation of the city under the protection of the European powers. But the Greek government took firm measures to promote their integration, including allowing them to work on Sundays and to observe Shabbat.

The great fire of 1917 destroyed the historic centre and a large part of the city’s architectural heritage and it was a disaster for the Jewish community. It destroyed the seat of the Grand Rabbinate, its archives, and half of the city’s 33 synagogues. Many Jews left for other parts of Europe, Turkey, the US and Alexandria in Egypt, where there were large Jewish and Greek-speaking communities. 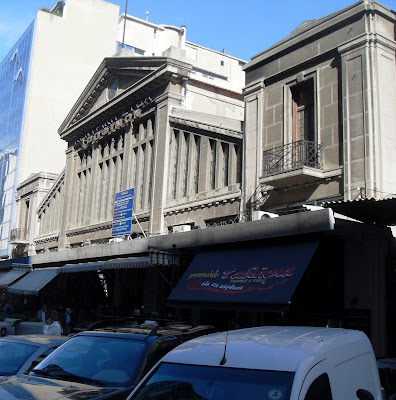 The sprawling and bustling Modiáno central market takes its name from the wealthy Jewish family who built it (Photograph: Patrick Comerford, 2011)

The influx of tens of thousands of Greek refugees from Anatolia, and the departure of Muslims, including the descendants of the Sabbateans, in the 1920s significantly changed the ethnic and religious diversity of the city. No longer were the Jews an absolute majority and by the eve of World War II they had been reduced to 40% of the city.

Those Jews who remained in the city saw themselves as both Greek and Jewish, and in 1926 the Greek Government re-emphasised that all citizens of Greece enjoyed equal rights. The historian Misha Glenny says these Greek Jews had not encountered “anti-Semitism in its North European form … The 20th century had witnessed the rise of anti-Jewish sentiment among Greeks ... but it attracted an insignificant minority.” 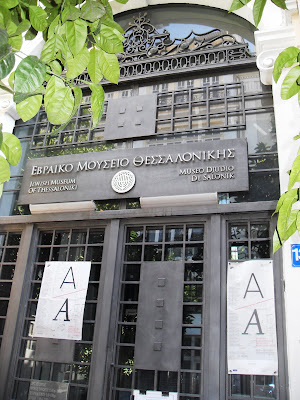 The story of the Jews of Thessaloniki is told in the Jewish Museum in Aghiou Mina street (Photograph: Patrick Comerford, 2011)

The Jewish population fell to 53,000 on the eve of World War II, and the emigrants to northern Europe included a future grandparent of President Nicolas Sarkozy of France.

When the city was captured by German Nazis on 22 April 1941, the threat of deportation was repeatedly met with disbelief. The Grand Rabbi of Thessaloniki, Zvi Koretz, was arrested by the Gestapo on 17 May 1941 and sent to a concentration camp near Vienna, although he returned in late January 1942 to resume his post.

In July 1942, all the men of the Jewish community between the ages of 18 and 45 were rounded up in Plateia Eleftherias and forced to do humiliating physical exercises at gunpoint. About 4,000 of them were ordered to build a road for the Germans from Thessaloniki to Kateríni and Larissa, a region infected with malaria.

In less than ten weeks, 12% of these Jewish men died of exhaustion and disease. In the meantime, the community in Thessaloniki, with help from Athens, collected 2 billion drachmas towards the 3.5 billion drachmas demanded by the Germans to ransom the forced labourers. In the meantime, the Germans forced the closure of the Jewish cemetery, with 300,000 to 500,000 graves. The Jewish tombs were destroyed, and the cemetery was turned into a vast quarry. The site is now the campus of the Aristotelian University.

About 3,000 to 5,000 Jews escaped Thessaloniki, finding refuge in the Italian zone, 800 more fled to the Macedonian mountainsides, joining the Greek Communist Resistance, ELAS. The remaining 54,000 Sephardim were shipped to the concentration camps. 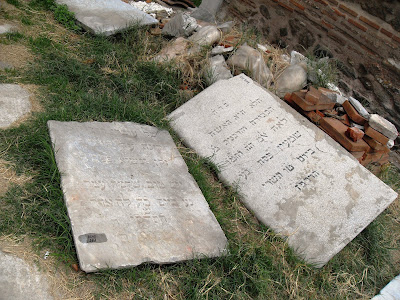 Towards the end of February 1943, the Jews of the city were rounded up in three districts – Kalamaria, Syngrou and Vardar or Aghia Paraskevi – and sent to a transit camp where the death trains were waiting. Each train carried 1,000 to 4,000 Jews, mainly to Auschwitz, with one convoy to Treblinka. Chief Rabbi Tzvi Koretz and others were sent to Bergen-Belsen, along with 367 Jews protected by their Spanish nationality.

The Jewish population of Thessaloniki was so large that the deportation took several months until the deportation was complete. But even in the concentration camps, the Greek Jews never ceased to affirm their sense of belonging to the Hellenic nation. Primo Levi, in If this is a man, described the strong patriotic sense among the Greek Jews in the camps: “They are amongst the cohesive of the national groups, and from this point of view the most advanced.”

In Birkenau, about 37,000 Jews from Thessaloniki were gassed immediately, including women, children and the elderly. Nearly a quarter of all 400 experiments perpetrated on the Jews were on Greek Jews, especially those from Thessaloniki. By the end of World War II, almost 98% of the Jewish population of Thessaloniki had died. Only the Jews of Poland experienced a greater level of destruction. By contrast, a large proportion of Jews in Athens managed to escape death. 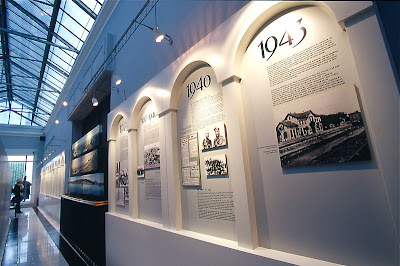 The exhibits in the Jewish Museum tell the story of the Jews of Thessaloniki over almost 2,200 years

Among the few survivors of the camps, some chose to return to Greece and others emigrated to Western Europe, America or Palestine. Those who returned to Thessaloniki were often the sole survivors in their families and found their homes occupied. But in the late 1940s, the government of George Papandreou, grandfather of the present Prime Minister, was the first European government to return Jewish properties that had been confiscated during World War II.

Yad Vashem has identified 265 Greeks among “The Righteous among the Nations,” the same proportion as among the French population. The 1951 census listed 1,783 survivors. Today, although this is the second largest Jewish community in Greece after Athens, only 1,200 Jews live in Thessaloniki.The only synagogue to have survived the Holocaust is the Monastirioton Synagogue in Synogrou, around the hotel where I have staying this week. However, services are normally held in the smaller Yad Lazikaron. The rich story of this community is movingly told in the nearby.

Canon Patrick Comerford is Lecturer in Anglicanism and Liturgy in the Church of Ireland Theological Institute and a canon of Christ Church Cathedral.

Additional reading for this essay:

Photini Constantopolou, Thanos Veremis (eds), Documents on the History of the Greek Jews (Athens: Kastaniotis Editions for the Ministry of Foreign Affairs of Greece, University of Athens Department of Political Science and Public Administration, 1998).

Posted by Patrick Comerford at 08:00 5 comments: