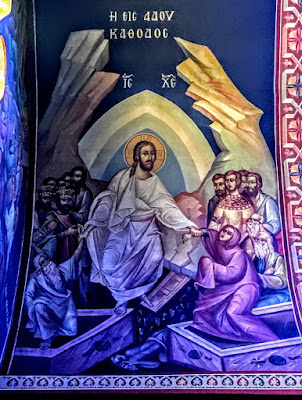 Good Friday in the streets
and churches of Rethymnon 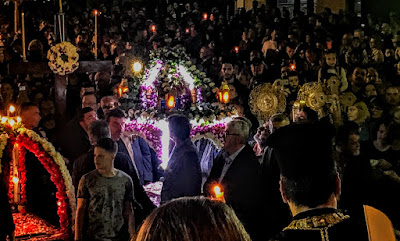 The Square in front of the Church of the Four Martyrs in Rethymlon was crowded as each church brought its own Epitaphios in procession through the streets (Photograph: Patrick Comerford, 2019)

Throughout the afternoon yesterday [26 April 2019], I spent much of Good Friday, visiting the churches in the heart of Rethymnon to see the decoration of the Epitaphios, the ceremonial bier of Christ. In each church, the Epitaphios is dressed with ribbons, topped with the Book of the Four Gospels, and strewn with petals.

All through the day, people queue up in church to reverence the Epitaphios, some coaxing their children to slip under the bier, all kissing the representation of the dead Christ and the Gospels, and then moving on to reverence the tall, bare cross erected in front of the icon screen.

The tourist season has not started properly yet, although a few hotels and restaurants are opened already. But, apart from tourists, most of the streets of Rethymnon were still and calm throughout the day. The one furtive piece of buying was by godparents, grandparents and kind aunts seeking Easter candles for children.

Before darkness bean to fall, we went to the Church of the Four Martyrs, the newest and largest church in the centre of Rethymnon.

In the evening, people from the cathedral and other parish churches throughout Rethymnon paraded their Epitaphios solemnly through the narrow streets of the town, headed by brass bands and robed clergy. All converged late in the evening in the large public square in front of the Church of the Four Martyrs, the largest church in Rethymnon, where we had waited throughout the evening for the climax of this unique Greek commemoration.

Brass bands, uniformed soldiers, flower-bedecked biers, robed choirs all stood before the steps of the largest church in the town as The Bishop of Rethymnon, Metropolitan Evgenios of Rethymnon and Avlopotamos, spoke from the steps of the church of the need for love and to dispel fear. There was a ripple of titters as he repeated it in English, ‘Don’t panic.’

We followed the procession of the Epitaphios from the Church of the Four Martyrs back to the Cathedral, headed once again by a brass band, uniformed soldiers in red berets, robed clergy and Metropolitan Evgenios. As people dispersed, they carried their candles home with them.

Throughout today, people are preparing to celebrate the Resurrection after dark this evening.

Tomorrow is a day for families, and nothing moves in Greece on Easter Day. 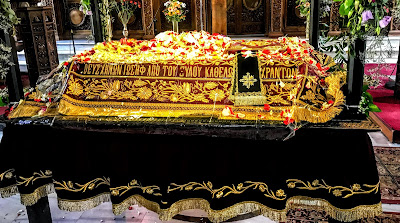 The Epitaphios in the Cathedral in Rethymnon before the Good Friday processions through the streets last night (Photograph: Patrick Comerford, 2019)