A wet Sunday in Bettystown and Balbriggan

A wet and windy Sunday afternoon on the beach in Bettystown, the ‘Gold Coast’ of Co Meath (Photograph: Patrick Comerford, 2011)

Had we had winter, followed by spring, and then returned once again to winter in Ireland?

The tide was in. It was cold. It was wet. It was breezy. And overhead there was no chink of blue through the heavy, heavy grey clouds.

I had walked down to the beach after an enjoyable lunch in Relish, with a table near a window looking out over the sandbanks onto the beach and out to the sea. I suppose even in disappointing weather like this, this is truly the Gold Coast of Co Meath.

Earlier in the day I had been at three churches a little further south: Kenure Church in Rush, Holmpatrick Church in Skerries and Saint George’s Church, Balbriggan. 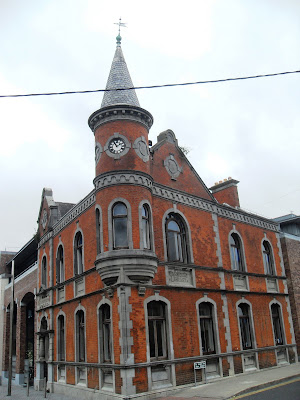 Near Saint George’s, on the corner of Saint George’s Square and High Street, is one of the splendid early 20th century buildings in this part of Fingal. The Carnegie Free Library was funded by the Scottish-American philanthropist Andrew Carnegie, and stands on a prominent corner site in the centre of the town. Its dominant feature is a corbelled corner turret.

The library was built between 1905 and 1906, with a stipulation that Irish materials should be used as far as possible. This distinctive building was designed by George Luke O’Connor, who met the stipulation by using red brick from Portmarnock and dressings of Milverton limestone quarried in Skerries. The contractor was a local builder, Michael Heeney of Balbriggan, and the library opened in November 1906.

The architect, George O’Connor, began his career when he was articled to William Kaye-Parry, and then entered the office of John Loftus Robinson. O’Connor was still very young when Robinson caught typhoid and died in October 1894, leaving him to carry on the practice. O’Connor’s commissions during his career included churches, convents, schools, hospitals, libraries, commercial premises, cinemas, and public and private housing.

A modern wing has been added to the library in recent years, but O’Connor’s circular-plan bartizan clock tower remains a prominent landscape feature in the streets of Balbriggan. 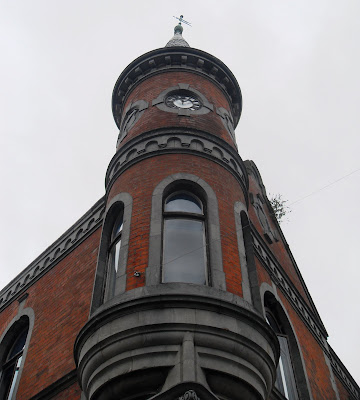