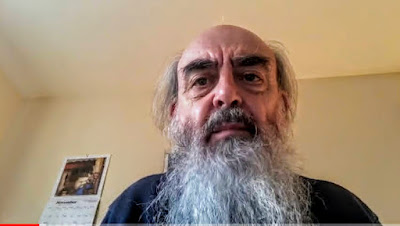 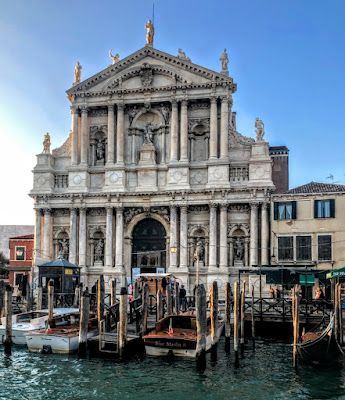 The Chiesa di Santa Maria di Nazareth or the Church of Saint Mary of Nazareth is better known as the Scalzi (Photograph: Patrick Comerford, 2021)

As part of my reflections and this prayer diary this week, I am looking at seven more churches I visited in Venice earlier this month. This theme continues this morning (25 November 2021) with photographs of the Chiesa di Santa Maria di Nazareth or the Church of Saint Mary of Nazareth, known as the Scalzi, beside Santa Lucia railway station and facing the Ferrovia waterbus stop. 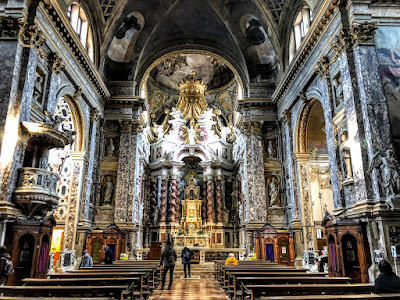 Inside Chiesa degli Scalzi, the church of the Discalced Carmelites in Venice (Photograph: Patrick Comerford, 2021)

The façade of the church, in the Late Baroque Venetian style, was financed by Gerolamo Cavazza and built by Giuseppe Sardi in 1672-1680. The statues of the Virgin and Child, Saint Catherine of Siena and Saint Thomas Aquinas were sculpted by Bernardo Falconi.

Inside, the church has statues of Saint John of the Cross and Saint Sebastian attributed to Falconi, and statues of Faith, Hope, and Charity by Tommaso Rues.

The vault of the nave was once filled with a major fresco by Giambattista Tiepolo in 1743-1745 depicting the Translation of the House of Loreto. Tiepolo had previously worked in the church, decorating the vaults of the chapel of Saint Teresa in 1727-1730 and chapel of Crucifix in 1732-1733.

Tiepolo’s fresco was destroyed during World War I by an Austrian bombardment of Venice on 24 October 1915. From 1929 to 1933, Ettore Tito painted canvases and frescoes to repair the damage. The remains of the fragments of Tiepolo’s work are now in the Gallerie dell'Accademia.

The altar was completed by Giuseppe Pozzo, and the choir ceiling by Giuseppe and Domenico Valeriani. The organ above the main door has carved and gilded decorations and reliefs. Above the organ, the lunette showing Santa Teresa crowned by the Saviour is by G. Lazzarini (18th century).

Other works of art include ‘Saint Theresa in Ecstasy’ (1697) by Heinrich Meyring, a Crucifixion by Giovanni Maria Morlaiter, and canvases by Tiepolo. 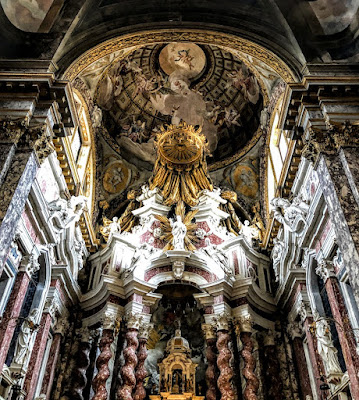 The choir ceiling is the work of Giuseppe and Domenico Valeriani (Photograph: Patrick Comerford, 2021)

[Jesus said:] 20 ‘When you see Jerusalem surrounded by armies, then know that its desolation has come near. 21Then those in Judea must flee to the mountains, and those inside the city must leave it, and those out in the country must not enter it; 22 for these are days of vengeance, as a fulfilment of all that is written. 23 Woe to those who are pregnant and to those who are nursing infants in those days! For there will be great distress on the earth and wrath against this people; 24 they will fall by the edge of the sword and be taken away as captives among all nations; and Jerusalem will be trampled on by the Gentiles, until the times of the Gentiles are fulfilled. 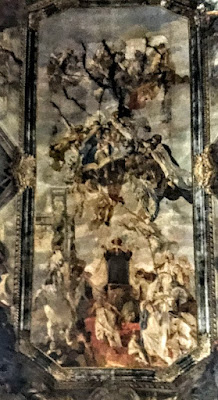 The ceiling of the nave was once filled with a major fresco by Tiepolo, destroyed by Austrian bombardment in 1915 (Photograph: Patrick Comerford, 2021)

The Prayer in the USPG Prayer Diary today (25 November 2021, International Day for the Elimination of Violence Against Women) invites us to pray:

Let us pray for victims of gender-based violence, as they seek healing and justice. May we keep them in our prayers. Today also marks the start of the 16 Days Against Gender-Based Violence campaign, which we encourage you to get involved with. 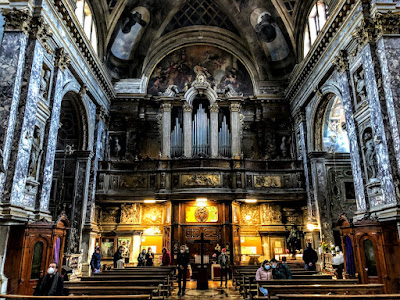 Above the main door, the organ has carved and gilded decorations and reliefs, and the lunette above the organ, ‘Saint Teresa crowned by the Saviour,’ is by G Lazzarini (Photograph: Patrick Comerford, 2021) 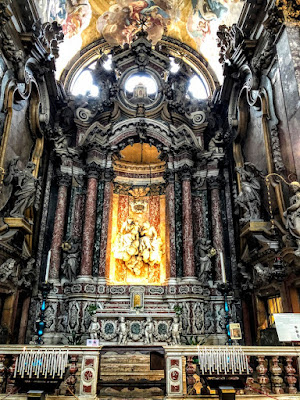 The last Doge of Venice, Ludovico Manin, who died in 1802, is buried in the Manin Chapel (Photograph: Patrick Comerford, 2021)