The Oxford Jewish Centre provides for all Jews in Oxford and holds services with Orthodox, Masorti and Progressive prayer, sometimes simultaneously

I was referred from Milton Keynes University Hospital to the John Radcliffe Hospital in Oxford earlier this week for further tests following my stroke two weeks ago (18 March 2022). I am back in Milton Keynes in time for the weekend, and looking forward to walks in fresh air and in the countryside around Stone Stratford.

It was over eight years since I had previously been in Oxford, when I stayed at Ripon College Cuddesdon and visited a number of colleges. But I had no opportunity to visit anywhere in Oxford this week during my hospital stay.

The shul on Richmond Road is a centre, a congregation, a community, and unique. The OJC hosts Orthodox, Progressive and Masorti services, as well as egalitarian Friday nights, women’s services and Progressive Chavura suppers, all under the same roof.

Some are weekly, others monthly, and at times different services are held simultaneously. But members belong to the OJC as a whole, rather than to one specific religious denomination, creating a model of Jewish community that is warm, inclusive and welcoming.

The congregation is a small community that includes both residents and students. The OJC cultivates a sense of unity and common Jewish identity, based on respect for the different strands of Judaism.

The original Jewish community in Oxford dates to the Norman conquest, and it was one of the most important Jewish communities in mediaeval England. Jews arrived in Oxford ca 1080, and took up residence in in Saint Aldates in the heart of the commercial centre. The street became known as Great Jewry Street, and about 80 to 100 Jews lived in Oxford.

Great Jewry was centred along what is now St Aldate’s and the side streets, many of which were obliterated when Christ Church was being built. The Synagogue was established in 1228 opposite Pennyfarthing Lane Earlier Jewish stone-built houses were also located east of Great Jewry – Merton College and Oriel College were founded in Jewish properties, and others were located throughout what is now Christ Church.

However, Jews were prohibited from attending the university, although Christian scholars consulted Jewish rabbis and scholars, and there may have been a Talmudic academy in Oxford.

In time, the Jews suffered increasing antisemitism throughout the 13th century. The attacks in Oxford usually occurred during Christian festivals, particularly at Easter. During the Ascension Day riot of 1268, it was alleged that a Jew had attacked a university religious procession and trampled a crucifix to the ground. The whole community were jailed, and the king punished the Jews of Oxford by forcing them to pay for a marble and gold crucifix in Merton College.

The property confiscated from the Jews of Oxford eventually passed to Merton College, Balliol College, and then to Christ Church when it was established. Evidence in the Bodleian Library suggests some Jewish converts, including scholars, remained in Oxford at the Domus conversorum or house of converts in the 14th century, producing Bibles in Hebrew and Latin.

But, since then, the first Jews in Oxford were found in the early 17th century. They assisted in cataloguing Hebrew manuscripts in the Bodleian Library or taught Hebrew privately to university students. One Jew, Jacob Wolfgang, converted in order to become a member of the university in 1608, and seems to be the first known Jew to be a member of Oxford University.

The Jews who began to drift back to Oxford in the 17th century included tradesmen. One known as Jacob – probably Cirques Jobson – introduced coffee and coffee shops to the city and to England – a fact for which I remain grateful.

By the 1730s, a small community was established in St Clements, a village close to the East Gate. They included pedlars, grocers and clothes traders. St Clements was outside the religious and civic jurisdiction of the university, and the small number of Jews were neighbours of the small Roman Catholic minority.

The Jewish community in Oxford remained small until the 19th century, when new opportunities and freedoms were opened to Jews, including political freedom and the end of the bar to unconverted Jews attending the university. Jewish undergraduates were admitted in 1856, and college fellowships were opened to all in 1871.

Still, there were few Jewish undergraduates until the end of the 19th century, and Sir Isaiah Berlin became only the fifth Jewish academic in Oxford when he became a fellow of All Souls College in 1932.

World War II brought 500 refugees from Germany to Oxford, and many families who were evacuated from London. When these people moved on after the war, the community shrank dramatically, and for 24 weeks of the year undergraduate Jewish students were the dominant group.

A non-profit charity was formed to hold the new building and all the underlying properties, and to ensure the OJC, the Oxford University Jewish Society (OUJS) and the kosher meals service could use the building in perpetuity. Special provisions were made too to protect student and Progressive interests.

Since the centre was built in 1974, the congregation has become increasingly pluralistic in outlook and character. The OJC describes itself as an ‘independent orthodox’ congregation, but membership is open to ‘all persons of the Jewish faith.’ Significantly, the community does not have a rabbi or other formal spiritual leader, and, except on the High Holydays, all services and funerals are run by synagogue members.

The Jewish community remains small, with around 200 families, and makes a virtue of the unique fact that different congregations are housed under one roof.

The Oxford Chabad House opened on Cowley Road in 2001 with a new rabbi, and a new student centre in at 61 George Street opened in 2006. The David Slager Jewish Student Centre is named after the grandfather of an alumnus of Exeter College, David Slager, who died in Auschwitz.

Additionally Jewish study is thriving inside and outside the university, in the Oriental Faculty and at the Oxford Centre for Jewish Studies. 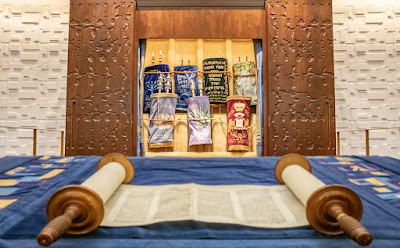 ‘Your tongue is like a sharp razor, you worker of treachery’ (Psalm 52: 2) … street art in Richmond Street, near Kelly’s Corner, Dublin (Photograph: Patrick Comerford)

I retired yesterday (31 March 2022) after five years in parish ministry in the Diocese of Limerick, and as Canon Precentor in Limerick, Killaloe and Clonfert. However, I intend to continue in a new though as yet unknown form of ministry. This morning I am still in the John Radcliffe Hospital Oxford, waiting for further consultations and recommendations for follow-up treatement before being sent back to Milton Keynes.

Meanwhile, before this day begins, I am taking some time early this morning (1 April 2022) for prayer, reflection and reading.

Psalm 52 is described as a Maskil, attributed to King David, and is said to have been written when Doeg the Edomite went and told Saul, and said to him, ‘David has come to the house of Ahimelech.’ In this psalm, King David criticises those who use their talents for evil.

In the slightly different numbering found used in the Greek Septuagint and Latin Vulgate translations, this psalm is numbered Psalm 51. This psalm opens the second section of the three traditional divisions of the Latin psalter. For this reason, the first words (Quid gloriatur in malitia qui potens est iniquitate ...), and above all the initial ‘Q’, were often greatly enlarged in illuminated manuscript psalters, following the pattern of the Beatus initials at the start of Psalm 1, and the ‘D’ of Psalm 102.

Psalm 52 could be classified as an individual psalm of trust, one that demonstrates an expression of trust or confidence in God’s assistant to the petitioner.

The psalm’s sub-heading refers to an event in I Samuel 21 to 22 when Doeg, the chief herdsman of Saul, the first king of Israel, informed Saul that David had been received by Ahimelech at Nob, a priestly town in the vicinity of Jerusalem, and assisted him with the means for his flight.

We might expect Doeg to be condemned. He was a man of wealth and importance as the chief of Saul’s herdsmen or, according to the Septuagint, the keeper of his mules. His tongue was ‘a deceitful tongue,’ because, although the facts he reported were true, he helped to confirm Saul in a false and cruel suspicion.

However, there are no references to the cold-blooded and sacrilegious murder of the priests at Nob. Doeg acted as Saul’s agent, but all his other officers shrank from executing his brutal order. This makes it difficult, if not impossible, to suppose that the Psalm was really written by David on that occasion, unless we assume that it was composed after Doeg’s information was given but before the massacre was carried out, although this is improbable.

‘God will … snatch and tear you from your tent’ (Psalm 52: 5) … an empty tent in a Moroccan restaurant in Dublin (Photograph: Patrick Comerford)

To the leader. A Maskil of David, when Doeg the Edomite came to Saul and said to him, ‘David has come to the house of Ahimelech.’

1 Why do you boast, O mighty one,
of mischief done against the godly?
All day long 2 you are plotting destruction.
Your tongue is like a sharp razor,
you worker of treachery.
3 You love evil more than good,
and lying more than speaking the truth.
Selah
4 You love all words that devour,
O deceitful tongue.

5 But God will break you down for ever;
he will snatch and tear you from your tent;
he will uproot you from the land of the living.
Selah
6 The righteous will see, and fear,
and will laugh at the evildoer, saying,
7 ‘See the one who would not take
refuge in God,
but trusted in abundant riches,
and sought refuge in wealth!’

8 But I am like a green olive tree
in the house of God.
I trust in the steadfast love of God
for ever and ever.
9 I will thank you for ever,
because of what you have done.
In the presence of the faithful
I will proclaim your name, for it is good.

The USPG Prayer Diary this week, under the heading ‘Let my people go,’ focuses on the approximately 230 million Dalits living in India. Considered outcasts, these communities suffer systematic exclusion and discrimination under the caste system, a system of social stratification. The USPG Prayer Diary this morning (1 April 2022) invites us to pray:

Let us pray for those who are treated as outcasts and pariahs in society. May they be accepted by the wider community and know that they are accepted by God.

‘I am like a green olive tree in the house of God’ (Psalm 52: 8) … an olive grove in the mountains above Rethymnon in Crere (Photograph: Patrick Comerford)