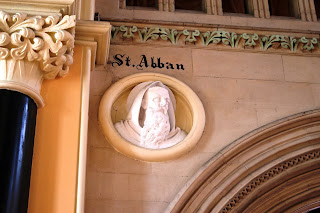 Saint Abban in a relief at the west end of the nave in the Church of Saint Mary and Saint Michael, New Ross, Co Wexford (Photograph: Andreas F. Borchert, 2012)

As we prepare to celebrate Saint Patrick’s Day, I am reminded again that there are many Irish saints who are said to be pre-Patrician. These claims, which are without historical evidence, are often made for Saint Declan (Ardmore), Saint Kieran (Seir Kieran), Saint Ibar (Wexford), Saint Ailbe (Emly) and even for Saint Abban of Adamstown, Co Wexford, who is celebrated today [16 March].

These stories, while lacking historical evidence, preserve the truth that Christianity had an organised presence in the southern half of Ireland prior to Saint Patrick’s mission.

The dates given for Saint Abban’s life and death vary greatly so that the Lives of the saint – which survive in two versions in Irish and one in Latin – confuse the time of his historical life, attributing to him a lifespan of over 300 years. Some sources say he died on 16 March 620, others say he died a century earlier, ca 520. Tradition and legend in Co Wexford says he a prince, the son of King Cormac of Leinster, and a nephew of Saint Ibar of Wexford.

The Irish genealogies of the saints and the entries for his feastday in the martyrologies suggest that he belonged to the Uí Chormaic (also Moccu Chormaic or Dál Chormaic). His father is named as Laignech, literally “Leinster man,” son of Mac Cainnech, son of Cabraid, son of Cormac, son of Cú Corb.

However, the Lives confuse the time he lived in, and this confusion would appear to give him a life-span of over 300 years. Some accounts make Abbán a contemporary of earlier figures like Saint Íbar, who is said to have been his mother’s brother, and Saint Patrick. The Lives say his father was Cormac son of Ailill, King of Leinster, who died in 435 according to the Annals of the Four Masters, and that his mother was Mílla, a sister of Saint Ibar. Other accounts bring him into contact with illustrious such saints as Finnian of Clonard, Brendan of Clonfert (died 577), Columba (died 597), Gregory the Great, Munnu and Moling.

Nothing is known of Abbán’s early life. The Lives tell that he was expected to succeed his father in Leinster, but that his devotion to God and the saintly miracles which he wrought while he was still a child soon made clear that he was heading for a career in the Church. The boy was sent to his maternal uncle, Bishop Ibar, with whom he travelled to Rome.

In Italy, Abban’s saintly powers are said to have warded off dangers posed by men, monsters and supernatural phenomena. Throughout the text, Abban can be seen demonstrating his powers, exercising special authority over rivers and seas.

Back in Ireland, Abban founded many churches in the Ui Cennselaigh area which is modern Co Wexford and the Diocese of Ferns. His main monastery is Magheranoidhe, in Adamstown, Co Wexford. However, he also connected to other churches in Ireland, notably that of his alleged sister, Saint Gobnait, in Ballyvourney, Co Cork.

There is another legend that Saint Abban was baptised as early as 165 AD and became a missionary in Abingdon, once the country town of Berkshire but now in Oxfordshire, and that Abingdon’s name is explained etymologically as Abbain dun, “Abbán’s town,” taking its name from the saint after he converted the king and the people of the area. However, in English, however, Abingdon probably means “the hill of Aben.”

Saint Abban is also linked to many other parts of Ireland. He is said to have given his name also to Killabban Abbey, in present-day Arles, Co Laois, serving as abbot there until he died on 16 March. Some traditions say he died in Killabban (Arles), others that he died in Ballyvourney. The Roman Catholic parish church in Adamstown is Saint Abban’s.