‘1916: Tales from the Other Side’
– an exhibition in Marsh’s Library 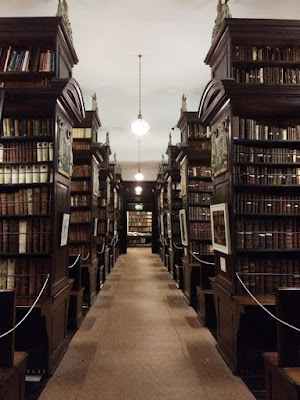 For the past two days, a delegation from the Scottish Episcopal Church has been visiting the Church of Ireland. Between the meetings and the talks in the Church of Ireland Theological Institute, the programme has included Choral Evensong in Saint Patrick’s Cathedral, Dublin, and a guided tour of Saint Patrick’s Cathedral with the Cathedral Manager and Dean's Verger, Louis Parminter.

One of the highlights of the visit was a private tour of Marsh’s Library, beside Saint Patrick’s Cathedral, and the current exhibition, ‘1916: Tales from the Other Side,’ which opened last month [March 2016].

Dr Jason McElligott, Keeper of Marsh’s Library, brought us through this new exhibition, which explores minority experiences in 1916 and in the years that followed.

This exhibition curated by Dr Elaine Doyle uses the unique archive of books, manuscripts and artefacts in Marsh’s Library to trace how minority communities responded to the tumultuous events of the Irish revolution 100 years ago.

These include the diaries of Jessica Taylor, a middle-class teenager who travelled into Dublin on Easter Week, follow a scholar as he crosses a city at war, and introduces a student librarian, Richard William FitzPatrick, as he joins the British Army in the aftermath of rebellion.

The exhibition introduces artists, librarians, cleaners and former revolutionaries, each negotiating aspects of their identity, and whose lives intersected with Marsh’s Library at a defining moment. The exhibition focuses especially on stories from the Protestant and Jewish communities in Dublin.

A 48-page catalogue, designed by Alan Costello, features 35 colour images of items from the exhibition, including letters from Sir Roger Casement, watercolours by Seán O’Casey, and ‘bullet books’, ancient texts that were damaged by machinegun fire during Easter Week and that have never been repaired.

The ‘bullet books’ on display have deliberately never been repaired (Photograph: Patrick Comerford, 2016)

The exhibition opens with a magazine published in 1916 by Irish Life, claiming to be ‘a plain narrative of events as they occurred’ and the front page of The Irish Times which called the rebellion ‘the darkest week in the history of Dublin.’

The library was directly in the line of fire between the insurgents’ position at Jacob’s biscuit factory and the barracks of the Dublin Metropolitan Police on Kevin Street.

The area around Jacob’s was relatively quiet during Easter Week, possibly because of a British decision to ‘lock down’ the area to protect Saint Patrick’s Cathedral. However, on Sunday 30 April 1916, a British army machinegun ‘inadvertently’ fired on the library from Saint Patrick’s Park. The result was significant damage to the roof and the windows of the reading room.

The bullets also struck a bookshelf, ‘injuring five books’. The books ‘injured’ were part of the original collection of the first librarian, the Revd Dr Elias Bouhereau.

These books have deliberately never been repaired. We were shown how each book has a compact entry hole of 1.5 cm on its spine, but the exit hole at the back is five or six times larger. The 400 or so pages within the covers of each book were ripped to shreds by the trajectory of the bullets and compressed by the pressure waves generated by the projectiles.

The machine-gunner was about 350 metres from the points of impact, and the damaged books give an insight into the effect of bullets on human flesh and bone.

In October 1916, the trustees of Marsh’s Library noted the ‘damage caused to the Library and its contents by the Sinn Féin Rebellion.’ The choice of the adverb ‘inadvertently’ in the minutes indicates the sympathies of the library trustees and staff. 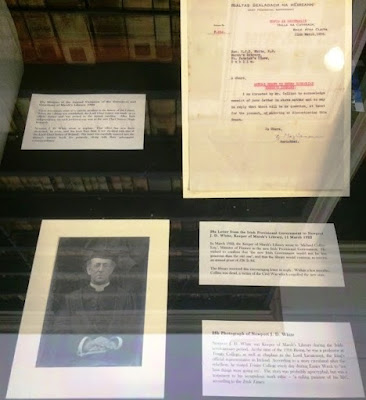 The exhibition tells the story of the library’s exchange with the Chief Justice (Photograph: Patrick Comerford, 2016)

Following the formation of the Irish Free State, the librarian made an oblique reference in October 1922 to the recent ‘malicious injuries to the windows’ of the library. It appears the staff believed the damage was motivated by anti-Protestant sentiment.

The first Chief Justice of the Irish Free State, Hugh Kennedy, wrote to the librarian In 1924, asking why he had not been notified of the recent annual meeting of the trustees.

It was not until 1969 that the library invited the then Chief Justice of Ireland, Cearbhall Ó Dálaigh, later President of Ireland, to attend the next annual meeting as an ex officio trustee.

All these stories are told in the exhibition, which also includes letters and postcards from Sir Roger Casement, a visitors’ from the time, accounts and bills for repairs to the library after the Rising, and catalogues from military outfitters of the day.

Marsh’s Library was founded in the early 18th century by Archbishop Narcissus Marsh (1638-1713). The building was designed by Sir William Robinson, the Surveyor General of Ireland, and is one of the few 18th century buildings in Dublin that is still used for its original purpose.

Many of the collections in the library are still kept on the shelves allocated to them by Archbishop Marsh and by Elias Bouhéreau, a Huguenot refugee, when the Library was opened.

Archbishop Marsh donated his own collection of books and bought the collection of Edward Stillingfleet, Bishop of Worcester. Dr Bouhéreau’s books were also added in those early days.

Narcissus Marsh (1638-1713) was born in Hannington, near Swindon, Wiltshire, the youngest in a family of five: his brothers were given the names Epaphroditus and Onesiphorus. He was educated at Magdalen Hall (now Hertford College), Oxford. From an early age, Marsh was identified with the Caroline Divines, and as an undergraduate, he noted: ‘All this while I constantly kept an entire fast every week from Thursday, six o’clock at night, until Saturday, eleven at noon.’ He spent a year (1670-1671) with one of the Caroline Divines in the Church of England, Bishop William Beverdige, correcting and supervising his monumental work on the Canons of the Greek Councils, published in Oxford in 1672.

He was ordained deacon and priest on the same day in 1662 by Robert Skinner, Bishop of Oxford, and became chaplain to another Caroline Divine, Seth Ward, Bishop of Exeter.

March came to Ireland in 1679 when the Duke of Ormonde nominated him as Provost of Trinity College Dublin. At TCD, he actively promoted the Irish language, started building the new College Hall and Chapel, and revised the regulations for administering the College library. But he also described Dublin as ‘this lewd debauched town.’

In a sermon preached in the Chapel of TCD in 1920, the Keeper of Marsh’s Library, the Revd Newport Benjamin White, recalled words penned by Marsh on his 52nd birthday: ‘I thank my God that my conscience doth not reproach me for any negligence either in my study or calling; but I do find a great deal of comfort in what I have done.’

The books Marsh left to the library included printed works in Hebrew, Syriac, Arabic, Armenian, Coptic, Ethiopic, Georgian, Slavonic, Persian and Turkish. He left his collection of Oriental manuscripts to the Bodleian Library in Oxford. 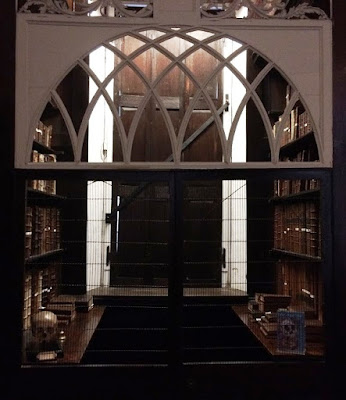 The library was formally incorporated in 1707 by an Act of Parliament vesting the house and books in trustees known as Governors and Guardians of Marsh’s Library.

Marsh’s Library on Saint Patrick’s Close houses more than 25,000 rare and fascinating books. Inside, the library and its beautiful dark oak bookcases have remained largely unchanged since it was opened over 300 years ago, and it is a fine example of a late Renaissance and early Enlightenment library. Each oak bookcase has carved and lettered gables, topped by a mitre, and we were also shown three elegant wired alcoves or ‘cages’ where readers were locked in with rare books.

Marsh’s Library is open to the public and children are particularly welcome. Scholars may consult the holdings by arrangement. The library is open on Monday, Wednesday, Thursday and Friday from 9.30 a.m. to 5 p.m. and on Saturdays from 10 a.m. to 5 p.m. It is closed on Sundays and Tuesdays.

The exhibition, ‘1916: Tales from the Other Side,’ continues in Marsh’s Library until the end of this year [December 2016]. 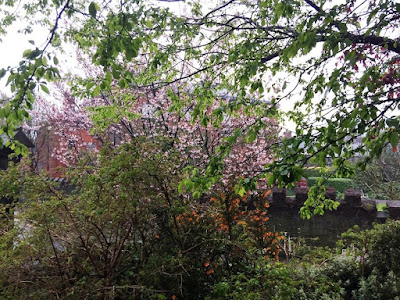 A rainy spring evening on the steps of Marsh’s Libray (Photograph: Patrick Comerford, 2016)

Posted by Patrick Comerford at 14:00 2 comments: