Picture-postcard images of Greek islands on the shelves of Lidl this evening (Photograph: Patrick Comerford, 2015)

I’m back from Greece for little more than a week, but already I am missing Greek food – the fresh fruit available every morning in the local supermarket in Platanes on the eastern edges of Rethymnon, the freshly-baked bread and pastries from the bakery downstairs, the taste of real Greek yoghurt and real Greek feta, the fresh figs and fleshy olives, the pomegranates, the aubergines, the peppers, the grapes growing on the vines …

There was Lidl supermarket behind Julia Apartments, where I was staying for the week, and I even joked about whether they had regular Irish weeks, just like Lidl stores in Dublin have regular Greek weeks.

But this evening, I was glad to live so close to a Lidl supermarket.

It’s Greek Week once again there … the first they have had since last May.

Being homesick for Greek food was aggravated last night as I stayed up late watching the Greek election results coming in on television news channels.

This evening, on the way home from work, I stopped off in my local Lidl for stuffed peppers, baklava, halva, cheese pies, Greek yoghurt (not Greek-style yoghurt), tzatziki, feta, broad beans … even a few bars of olive soap, all from the Eridanous range, all decorated in the Blue and White national colours, and often with images of sun-kissed Santorini, with blue domes and roofs over white-washed churches and houses.

Although they had bottles of ouzo and anessia, they had no Greek wines however.

But as the evenings close in and the nights become longer than the days, meaning autumn is soon going to show signs of turning to winter, the taste of Greece is going to linger a little longer, and promises and hopes of returning to Crete are kept alive. Remembering the events of 1916 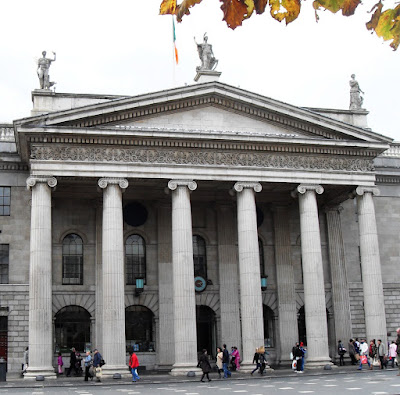 The General Post Office in Dublin … but the Easter Rising is not the only important anniversary to remember in 2016 (Photograph: Patrick Comerford)

To mark the 100th anniversary of the beginning of World War I, the Church of Ireland Liturgical Advisory Committee has produced an on-line resource for local use in parishes holding Services of Remembrance.

I wrote the introduction to this resource, which was used in many parishes on Remembrance Day last year [2014].

Over the coming years, a succession of 100th anniversaries of World War I will be marked until 2018.

Meanwhile, next year is likely to be dominated by events remembering the Battle of the Somme and the Easter Rising in 1916. Once again, the Liturgical Advisory Committee has produced a liturgical resource in the form of a Service of the Word for a commemoration of The Easter Rising 1916.

I was asked to write this introduction:

Remembering the events of 1916:

As the commemorations of events one hundred years ago continue, recalling the stories and tragedies of the years 1914-1918. This service focusses on the Easter Rising (24 to 29 April 1916), and the executions that followed in May.

The casualties in the Easter Rising are difficult to count. The British Army reported 116 dead, 368 wounded and nine missing; 16 policemen died and 29 were wounded; 318 rebels and civilians were killed and 2,217 wounded – although the last figure has never been divided between rebels and civilians. All 16 policemen who were killed and 22 of the soldiers killed were Irish.

We should remember too that the majority of the casualties, both dead and injured, were civilians, and most of the civilians who died were killed by indirect fire.

The commemorations of the events in 1916 are often politicised and divisive. Yet, in the wider context at Gallipoli, in Easter 1916, and at the Somme, people from both parts of the island and from both traditions fought side-by-side, suffered together, and sustained, encouraged and cared for each other. Wherever they fought, on whichever side they fought, or whether they were non-combatants, the majority of those who suffered and died believed they were shaping and making a new Ireland that would value peace and justice.

Those who supported the Rising shared hopes for “the happiness and prosperity of the whole nation and of all its parts, cherishing all of the children of the nation equally, and oblivious of the differences … which have divided a minority from the majority in the past.”

– 1916 Proclamation of the Irish Republic

In remembering the events of one hundred years ago, the Church must give voice to shared suffering, silenced and untold stories, the many and nuanced narratives, bravery and heroism, and commitment to ideals that were underpinned by shared and common aspirations. How we design and structure our commemorations can restore these hopes they shared for future generations. Confession and thanksgiving, in the proper proportions and in creative tension and balance, can help achieve this.