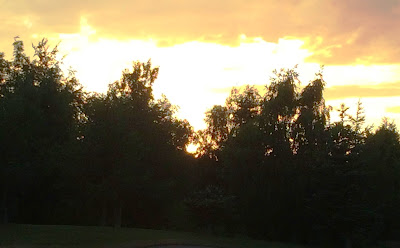 I was in Kilcoole, Co Wicklow, this evening [10 July] for a reception and the launch of both the Kilcoole 1914 Centenary and Heritage Weekend and a new booklet, Forgotten History: The Kilcoole Gunrunning.

This evening’s reception and launch took place in the Druids Glen Clubhouse, Kilcoole. I missed an earlier launch in the afternoon at the Asgard Exhibition at the National Museum at Collins Barracks, but after an early dinner this evening in the Happy Pear in Greystones, I went to the Druids Glen for the launch and reception

There too were a colour party in uniforms from 1914, members of the local organising committee from Kilcoole Heritage Group, Canon Robert Jennings, who is still enthusiastic about local history, and former Irish Times colleague Peter Murtagh. 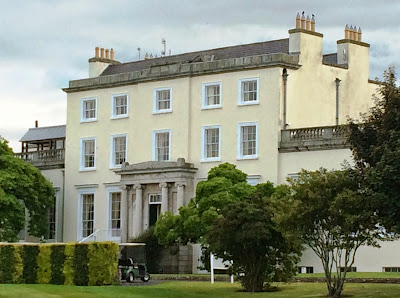 The club house at Druids Glen stands on the former Woodstock Estate, which dates back to 1600, when it was part of Sir Thomas Wentworth’s extensive landholdings in Co Wicklow and south-east Ireland.

In 1740, the Earl of Aldborough bought the estate from the descendents of Thomas Wentworth, and Lord Aldborough’s son, John Stratford, built Woodstock House in 1740.

Lord Robert Ponsonby Tottenham, Bishop of Clogher, bought Woodstock in 1826. He employed Sir Richard Morrison to design the extensions to the house, including the wings. When bishop died in 1850, he left the estate to his son, Lieutenant-Colonel Charles John Tottenham, MP for Wicklow East.

The Duke of Wellington’s brother, Richard Colley Wellesley, 1st Marquess Wellesley and twice Lord Lieutenant of Ireland (1821-1828 and 1833-1834), once rented the house. Eventually it passed out of the hands of the Tottenham family in 1946 when Gerard Van den Berg bought Woodstock.

In turn, William Grantham Lewis Forwood bought the estate in 1968. Woodstock House was used in the 1980s as a writing and recording base at times by musicians and recording artists, including Mike Oldfield for recording Tubular Bells II, Rod Stewart, Steve Winwood and Jim Capaldi. The house also featured in the RTÉ television series Glenroe.

A consortium of Irish entrepreneurs who bought the property in 1990 employed Pat Ruddy and Tom Craddock to design a golf course, and Druids Glen Golf Course opened in 1995. A five-star hotel opened here in 2002.

The Kilcoole Heritage Group has invited me back to Kilcoole next Thursday evening [17 July] to speak on Sir Thomas Myles and his role in the Kilcoole gunrunning, this time in Kilcoole Golf Club.

Kilcoole is one of the regular locations for my weekend beach walks, and I have happy memories of childhood holidays there in the early 1960s. I wrote about Myles and the Kilcoole gunrunning as a forgotten episode in Irish history in the Church Review and the Diocesan Magazine in my monthly columns in May.

Most people in Ireland know about the 1914 Howth gunrunning, the Asgard, and Erskine Childers. But people in Kilcoole are concerned that few people know about the Kilcoole gunrunning that same year. Yet the two landings are a combined event and the full story is about a dramatic, daring and dangerous episode in Irish history.

As a local community, the residents of Kilcoole want to highlight and publicise their own forgotten story.

We heard this evening how later this month, the Kilcoole Heritage Group is running a two-day living history weekend on 26 and 27 July, with a re-enactment of the landing, a parade with an army colour Party, market stalls, trade and craft demonstrations, a photographic exhibition and lectures.

The 32-page book is by Jennifer O’Hara and edited by Gregori Meakin. Dr Ruan O’Donnell, lecturer in History at Limerick University and a former resident of Kilcoole, says: “This account of the Kilcoole gunrunning provides a fresh perspective on an important episode in Irish story. The arming of the Irish volunteers transformed the quest for Independence.”

Ruan has also written the introduction to the new version of FX Martin’s The Howth Gunrunning and the Kilcoole Gunrunning, due to be published later this month.

The Kilcoole landing on 2 August 1914 occurred a week after the Irish Volunteers brought 900 rifles and ammunition into Howth on the Asgard. The landing was a propaganda stunt aimed at responding to the Unionists’ landing of arms at Larne a few months before and to show that the IRB had the ability to breach the British arms prohibition and embargo and arm the Volunteers.

However, few people knew about the Kilcoole landing of 600 rifles and ammunition under the cover of darkness, transported on Conor O’Brien’s Kelpie but landed by Sir Thomas Myless The Chotah.

Many of the conspirators, including Sir Thomas Myles, Sir Roger Casement, Erskine Childers, Countess Markievicz, Conor O’Brien, Darrell Figgis and Mary Spring Rice, were members of the Church of Ireland.