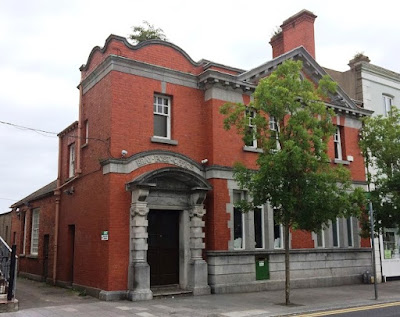 When I began exploring the elegant Edwardian and Victorian architectural heritage of Quinsborough Road earlier this week, I was writing about the former Presbyterian Manse, which was built in 1850, and Saint Andrew’s Presbyterian Church on the neighbouring corner site.

At the time, I promised myself I would return to take another look at Bray Post Office across the street from the Manse at 18 Quinsborough Road.

Quinsborough Road was laid out by William Dargan in the 1850s, linking Bray’s Main Street at the west end, with the Railway Station and the Promenade at the east end, as part of his vision of transforming Bray into the ‘Brighton of Ireland.’ It was his vision that led to the building of three elegant terraces of Victorian houses – Prince of Wales Terrace, Goldsmith Terrace and Duncairn Terrace – as well as the imposing Turkish Baths and the International Hotel, which were demolished in recent decades.

The Post Office at the western end of Quinsborough Road followed the other developments by almost half a century, but it has been argued that this is “the most distinguished Edwardian composition in the whole of Bray and one of the town’s most memorable buildings.”

This end-of-terrace, three-bay, two-storey building with an attic was built 1904 in what has been described as either a “Free Queen Anne Style” or a “New Dutch Renaissance” style.

The façade is in brick with a tall rusticated granite base course, and granite bands, door case, window surrounds, sills, and a dentilled eaves course. The parapet is somewhat eclectic, curved to the west side with a large pediment-like gable to the east, and this gable tops a broad projecting bay.

The slated pitched roof is part hipped and part gable-ended and has brick chimney stacks.

The entrance is a panelled timber door which with a Baroque surround consisting of three-quarter Ionic column ‘jambs’ set on tall plinths and interspersed with blocks in the style of James Gibbs (1682-1754), and with swags to the capitals. The columns support reeded brackets which in turn support a curved pediment.

Directly above the doorway, an arched granite band has moulded lettering spelling out: ‘Bray Post Office.’

On the pediment-like gable, a small circular window has a key block surround and a 12-pane frame. There are cast-iron rainwater goods, and a projecting sign to the ground floor dates from the 1990s.

Behind the building there is a former caretaker's residence, but this was impossible to see behind the walls when I visited last Friday and Sunday [12 and 14 August 2016].

The new Bray Post Office opened in April 1905. But who was the architect? 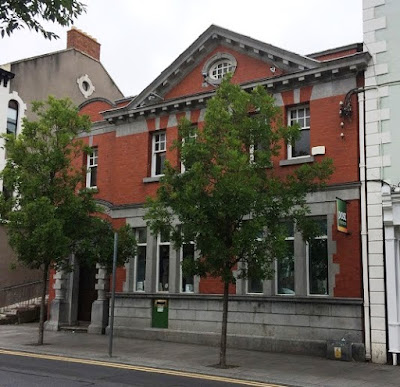 Some sources credit Bray Post Office to George William Crowe, who designed the Post Offices in Boyle, Co Roscommon (1907-1908) and on The Diamond, Clones, Co Monaghan (1917). However, most sources agree that this is the work of Robert Cochrane (1846-1916).

Robert Cochrane was distinguished during his career as a civil engineer, an architect and an antiquarian. He was born in Co Down on 21 July 1844, a son of Hugh W Cochrane, and was educated at the Queen’s College, Belfast.

He was articled to Henry Smyth, the County Surveyor of Co Down, and became the town surveyor of Banbridge and Dromore and assistant county surveyor for the Banbridge district. He also acted as the engineer and surveyor for the Co Down estates of the Earl of Clanwilliam and for the trustees of General Meade.

In 1874, he joined the architects’ department of the Board of Works and was sent to Athlone as clerk of works, and later assistant surveyor of buildings for the western district, including Co Galway, Co Mayo, Co Roscommon and Co Sligo.

He was promoted in 1887 when he became a surveyor in the Dublin headquarters of the Board of Works, and he held that post until he retired in 1909.

He was admitted a fellow (FRSAI) in 1881, and served the society as honorary secretary and editor of the society’s journal (1888-1907), as treasurer (1888-1898), and finally as president (1909-1912). In these roles, he was singularly responsible for the regeneration and reorganisation of the society.

He was also elected a member of the Royal Irish Academy (MRIA), often regarded as the highest academic honour in Ireland, in 1884, and was a council member (1897-1903).

He was elected a Fellow of the Society of Antiquaries (FSA) in London in 1892, and was a member of several other learned societies in Ireland and abroad.

He also published books and several papers on antiquarian subjects. In his A List of Ancient Monuments of the County of Cork (1913), he tried to initiate a classified, scientific record of the ancient remains of each county in Ireland.

He strongly argued the case for a Royal Commission on Ancient Monuments for Ireland, but without success. But his antiquarian and architectural expertise made him ideally suited for the post of Inspector of Ancient Monuments for Ireland, and he held this post from December 1899 until he died. His obituary in the Irish Builder said his annual reports to the Commissioners of Public Works were ‘luminous’ and predicted that they would become ‘classic records in the literature of the subject.’

Cochrane married Sarah Mary, daughter of George Hawken of Battersea, in 1879, and their two sons and a daughter were born while they were living in Athlone.

In 1903, he was decorated as a Companion of the Imperial Service Order, established by King Edward VII the previous year to honour distinguished civil servants. In 1905, he received an honorary degree (LL.D) from the Royal University of Ireland. He survived a severe illness in 1907, but he retired two years later in 1909.

Although he had retired, he was the only Irish architect invited to the coronation of King George V in 1911. 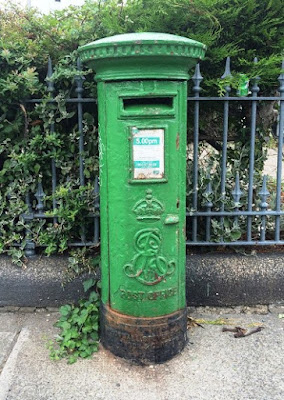 A surviving but rusting Edwardian pillar box at the end of Quinsborough Road, near Bray Railway Station (Photograph: Patrick Comerford, 2016)