Returning from Cambridge with gains and
successes after rummaging and browsing 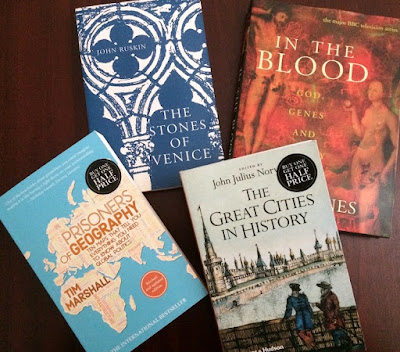 One the advantages of spending a week’s study leave in Cambridge is being able to enjoy the benefit of the many bookshops in the heart of the university city. The way Ryanair has eased restrictions on cabin baggage makes it easier to bring back books on flights home, and has increased the temptation to go browsing and rummaging in new and second-hand bookshops.

Waterstone’s on Sidney Street is just a few steps from Sidney Sussex College, where I was spending a week and the Cambridge University Press around the corner claims to stand the oldest site of any bookshop in England. David’s, in a side street near King’s College, is probably the best second-hand and antiquarian bookshop anywhere in the English-speaking world.

I brought back some more books from Cambridge earlier this month, including two new books and two second-hand books for my own pleasure.

In The Great Cities in Europe, John Julius Norwich paints a portrait of world civilisation by telling the stories of the world’s greatest cities from ancient times to the present.

This book, which was published in paperback this year by Thames and Hudson (London, 2016), was first published in hardback in 2009. John Julius Norwich is best-known for his works on the Byzantine empire, mediaeval Sicily and Venice, and he has produced 30 historical documentaries for BBC television.

We live in a world where, for the first time in history, the majority of people in the world live in cities. The implications and challenges associated with this fact are enormous. But how did we get here?

From the beginnings of urbanisation in Mesopotamia to the global metropolises of today, great cities have marked the development of human civilisation. The Great Cities in History tells their stories, starting with the earliest, from Uruk and Memphis to Jerusalem and Alexandria.

Next come the fabulous cities of the first millennium: Damascus and Baghdad, Teotihuacan and Tikal, and Chang’an, capital of Tang Dynasty China.

The mediaeval world saw the rise of powerful cities such as Palermo and Paris in Europe, Benin in Africa, and Angkor in south-east Asia
.
In the third section of the book, we are brought through the early modern world, including Isfahan, Agra, and Amsterdam. Here Thomas Pakenham looks at ‘Dublin and early Georgian elegance.’

In the last section, we travel to the contemporary city: London and New York, Tokyo and Barcelona, Los Angeles and São Paulo.

Yes, London is there twice, and so too is Istanbul, or Constantinople, but I was surprised there was no Oxford, no Cambridge, no Madrid, no Ephesus and no Thessaloniki. Another editor would have produced a very different, perhaps not as equally imaginative, list of cities.

And I found myself in places I plan to visit, including Krakow, and many more I dream of visiting.

As well as Tom Pakenham on Dublin and John Julius Norwich on Constantinople, Palermo and Venice, the collection of contributors includes Jan Morris (New York with Alexander Bloom), Michael D Coe (Angkor), Simon Schama (Amsterdam and Washington DC), Orlando Figes (Moscow), Felipe Fernandez-Armesto (Mexico City and Buenos Aires), Misha Glenny (Vienna and Budapest), Susan Toby Evans (Teotihuacan and Tenochtitlan) and AN Wilson (the two entries on London). In about four pages for each vignette, the contributors evoke the character of each place ― people, art and architecture, government ― and explain the reasons for its success.

The book is generously illustrated with 280 colour and 50 black and white illustrations, including photographs, maps and plans.

There are maps-aplenty too in Tim Marshall’s Prisoners of Geography, first published in hardback last year [2015] and published in paperback this year (London: Elliott and Thompson).

Marshall is a widely-travelled author, journalist and blogger. He is a former Diplomatic Editor at Sky News, and has worked as a journalist in conflicts in Croatia, Bosnia, Macedonia, Kosovo, Afghanistan, Iraq, Lebanon, Syria and Israel.

In 10 chapters, covering Russia; China; the US; Latin America; the Middle East; Africa; India and Pakistan; Europe; Japan and Korea; and the Arctic, he uses maps, essays, and occasionally his personal experiences, to look at the past, present and future and to offer an essential insight into one of the major factors that determines world history.

All leaders are constrained by geography. Their choices are limited by mountains, rivers, seas and concrete. To follow world events, we need to understand people, ideas and movements. But if we do not know geography, we can never grasp the full picture.

Here he tries to answer why Putin is so obsessed with Crimea, whether the US was destined to become a global superpower, or why China’s power base continues to expand ever outwards.

This is a lucid yet at times entertaining guide to geopolitics with a compelling and fresh look at maps, not as aids to orientation or works of art, but as guideposts to the tense relations between nations.

He shows how geography shapes our history, our political destiny and the choices of world leaders and how politics is nothing without geography.

David’s, dating from 1896 and hidden away in a side alley, is my favourite second-hand bookshop in Cambridge (Photograph: Patrick Comerford)

I have often read other people’s copies of John Ruskin’s The Stones of Venice, but I never had my own copy until I picked up one in a second-hand bookshop in Cambridge earlier this month.

This slim edition, edited by JG Links, the author of Venice for Pleasure was published in 2001 in London by Pallas Athene.

The Stones of Venice was originally a three-volume work on Venetian art and architecture by John Ruskin (1819­-1900), and was first published from 1851 to 1853, and this is the most-widely approved edited and abridged edition, first published in the US in 1960. Had I studied architecture rather than theology, this would have been on the essential reading list.

Ruskin was the greatest writer on art, literature and architecture Victorian England’s. He first described architecture as poetry in 1839, and later wrote: ‘To see clearly is poetry, prophecy, and religion, ― all in one.’ Later, Ruskin would describe the Church of Saint Augustine and Saint John the Baptist or John’s Lane Church in Thomas Street, Dublin, designed by Edward Welby Pugin, as ‘a poem in stone.’

Ruskin regarded himself as an adopted son of Venice, and his feelings for the city are expressed exquisitely in The Stones of Venice. He wrote in 1851, ‘Thank God I am here, it is a Paradise of Cities.’

This edition includes Ruskin’s famous essay ‘The Nature of Gothic,’ which strongly influenced the Gothic revival in architecture on these islands from the mid-19th century on.

Ruskin’s passionate exposition of the Gothic, which he saw as perfected in Venice, was linked to his commitment to socialism and to his love of literature.

Alongside John Julius Norwich, JG Links (1904-­1997) was one of the great exponents of Venice of the 20th century. Lings designed this edition to convey all the excitement, urgency, and love of Venice to a new generation of readers, and described it ‘as a book for the lover of architecture, the lover of Venice, the lover of lost causes … but, perhaps, above all, for the lover of fine writing.’

I also returned with Steve Jones’s In the Blood, God, genes and destiny, which was published 20 years ago in 1996 (London: Harper Collins). This book is about human origins, and draws on what was then the latest knowledge from anthropology and archaeology, through genetics and evolution, to psychology and medicine, and tackles issues such as hereditary genes in criminal behaviour and homosexuality. He separates genetic fact from genetic fiction and tries to set a balance that is often lost in debate.

This not just a lay persons introduction to scientific thinking about DNA and genetics ― indeed, much of what Jones writes may need updating today ― but is an essential corrective to the reasons people engage in genealogical pursuits. As he points out, most readers, more likely than not, are descendants of William the Conqueror.