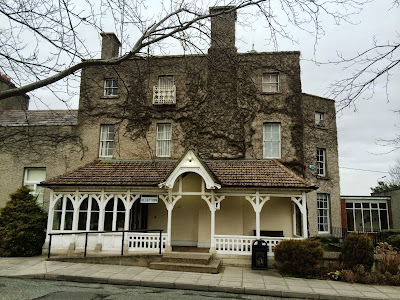 Kilvare House, now known as Cheeverstown House … as Kilvare House it was home to an Archbishop of Dublin (Photograph: Patrick Comerford, 2015)

I was at lunch this afternoon in Corfu Restaurant in Parliament Street in Dublin, celebrating the sixtieth birthday of a dear friend, with her family and friends.

On the way home, I realised that I had never seen Cheeverstown House, which stands across the road from Templeogue House. Although the house stands with its back to Templeogue Road, close to the Spawell junction, it is an interesting and curious house, originally known as Kilvare House, and history that stretches back more than 200 years.

Rocque’s map shows that a house stood here on of 1760, but it is not named. Kilvare House may have been built on the site in 1800, with its back to the road, faces the River Dodder and the Dublin Mountains. Here, the River Dodder forms a great loop that encloses the property on three sides.

Sir Compton Domvile, who lived across the road from Kilvare House in Templeogue House, did not like the prospect of his ancestral home being overlooked by the new Kilvare House, and had a 30 ft wall built so his property would not be overlooked. Sir Compton Pocklington Domville of Templeogue House was a son-in-law of Bishop Charles Lindsay of Kildare, and in 1815 he was given the tile of baronet.

By 1812, Kilvare House was the home of Jeffrey Foot, the eldest son of Lundy Foot (1735-1805), a wealthy tobacconist. Foot built a wall alongside the River Dodder to prevent flooding, but the resulting removal of stone and shingle in building the wall meant the Dodder never flooded at the time. Another brother, also Lundy Foot, built the first house at Orlagh, now a retreat centre run by the Augustinians.

Jeffrey Foot later moved to Holly Park outside Rathfarnham, and died in 1824. Holly Park would became the nucleus of Saint Columba’s College, while Jeffrey Foot’s son, Canon Lundy Foot (1793-1873), was the first Rector of Whitechurch Parish. 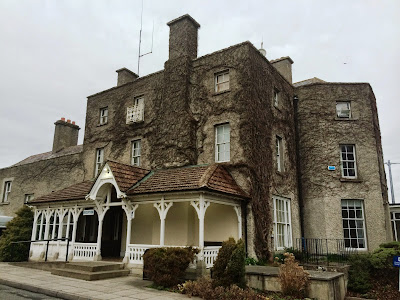 Kilvare House … parts of the house may have been salvaged from the Tallagh Palace of the Archbishops of Dublin (Photograph: Patrick Comerford, 2015)

Archbishop of Dublin, William Magee (1766-1831), moved to Kilvare House about 1822 when he became Archbishop of Dublin. He leased Tallaght Castle, which had been the country seat of the Archbishops of Dublin for centuries, to Major James Palmer (1780-1850), Inspector General of Irish Prisons and son of Archdeacon Henry Palmer of Ossory.

The lease included a condition that Major Palmer must demolish the old castle lest it ever become a monastery. Palmer dismantled all but the mediaeval tower, and from the materials built himself Tallaght House on the site of the present Dominican retreat house. It is said that as the old palace in Tallaght was being demolished, Magee salvaged some elements from the old castle and incorporated them into Kilvare House, including the curious chimney pieces and other features.

Magee was an opponent of both the Act of Union and Catholic Emancipation. He was born in Enniskillen, Co Fermanagh, the son of a wealthy Scottish Presbyterian merchant who was later reduced to poverty. After graduating from Trinity College Dublin, Magee was ordained deacon in old Saint Kevin’s Church, Dublin, on 25 May 1790. He became Professor of Mathematics in TCD in 1800, Archbishop King’s Lecturer in Divinity in 1808, and Regius Professor of Greek in 1809.

Magee was living at Kilvare House in in 1829, but died at Redesdale in Stillorgan, Co Dublin, on 18 August 1831, and was buried in the old churchyard in Rathfarnham village. He was the grandfather of Archbishop William Connor Magee (1821-1891) of York. 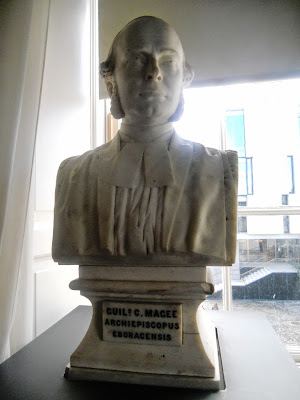 The bust of Archbishop William Magee of York, former Rector of Enniskillen, in the Henry Jones Room in the Old Library in Trinity College Dublin (Photograph: Patrick Comerford)

John Sealy Townsend, law adviser to Dublin Castle and then Master in Chancery, later lived at Kilvare House. Master Townsend, as he was known, was from Co Cork and was an eccentric character. When he thought his guests had too much of his wine to drink at dinner, he would pretend to nod off and fall asleep at the table.

One evening, as he pretended to doze at the dinner table, Townsend’s guest and neighbour, BT Ottley of Delaford, who was Commissioner of Public Works, took his place and lavishly passed around more wine to the other guests. Townsend was so put out that he never again invited Ottley to dinner.

Townsend was so mean with his money that when he died he had accumulated a fortune of over £100,000 which passed to his heirs.

By the end of the 19th century, Kilvare House was the home of John E Roche and his family. In 1880, the house was taken by John McConchy, a miller, and probably a relation of the family who operated the mill opposite.

The Cheeverstown Convalescent Home for Children, founded in 1904, moved from Clondalkin in 1922, taking its name with it, so that Kilvare House became Cheeverstown House around 1933.

Until 1972, about 700 children were provided with convalescent care each year for conditions like whooping cough and measles. Later, Saint Michael’s House took charge of the house as a special care unit for people with intellectual disabilities. The new Cheeverstown Village was opened in 1984.

A nearby housing estate named Kilvere preserves the memory of the original name of the house.

Earlier in the weekend, I spent Saturday afternoon [14 February 2015] on the shores of Lough Ramor, outside Virginia, Co Cavan.

Friends I have known for almost a quarter of a century – we first met in Bucharest in 1991 – had invited me to bless their house at Munterconnaught, close to the shores of the lake.

It was a romantic setting for Saint Valentine’s Day, and despite the earlier grey skies and grey clouds on the east side of the lake earlier in the afternoon, the weather lifted on the west side of the lake, looking across from Munterconnaught to Virginia on the other side.

I learned to row on this lake almost 50 years ago as teenager in 1967, and it retains all its charm and wonder. 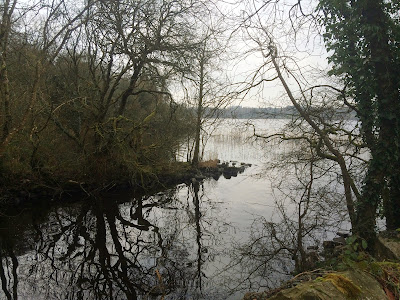 On the western shores of Lough Ramor on Saturday afternoon (Photograph: Patrick Comerford, 2015)