Saint Michael’s Church,
Sneem, a Hardwick church
on the Ring of Kerry 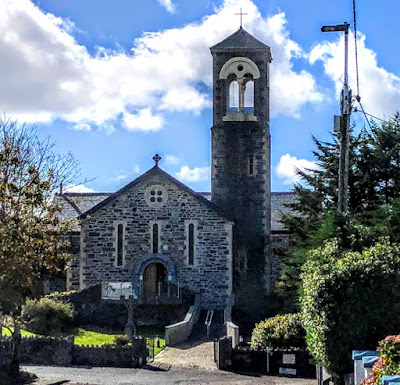 On my visit to Sneem on the Ring of Kerry earlier this summer, I had visited the Church of Ireland parish church, the Church of the Transfiguration, on the west bank of the River Sneem, on the road from Kenmare to Waterville.

When I visited Sneem last week, I also stopped to visit the Roman Catholic parish church, Saint Michael’s Church, on the east bank of the river, with spectacular views of the River Sneem as it falls below the below the bridge and opens out on its way into Kenmare Bay.

This early church was small, with a mud floor and no pews, and was unable to meet the needs of the village. 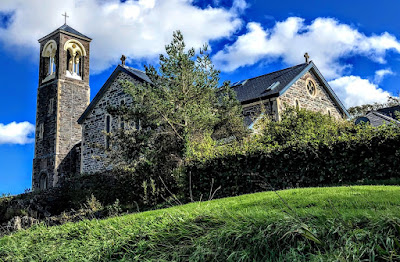 Edwin Richard Wyndham-Quin (1812-1871), 3rd Earl of Dunraven, who had become a Roman Catholic in 1855. He lived at Adare Manor, and was renting a holiday home near Sneem on Garnish Island, from the Bland family. He was appalled by the condition of the small church in Sneem, and in 1855 he resolved to build a fitting place for divine worship at his own expense.

He commissioned a leading London architect, Philip Charles Hardwick (1822-1892), who was then working on rebuilding Adare Manor, to build a new church in Sneem. Hardwick’s other works included the Bank of England, Saint John’s Cathedral, Limerick, the Redemptorist church at Mount Saint Alphonsus in Limerick, and the parish churches in Adare, Co Limerick.

The design for the new church in Sneem was cruciform, and in the Italian style, with the length from the chancel to nave 100 ft, and the breadth across the transepts 74 feet. The cost of the project was estimated at £3,000 in the Dublin Builder on 15 September 1863. But it had soared 33 per cent by 4 August 1865, when the Dublin Builder reported that Lord Dunraven had spent the ‘princely sum of £4,000.’ 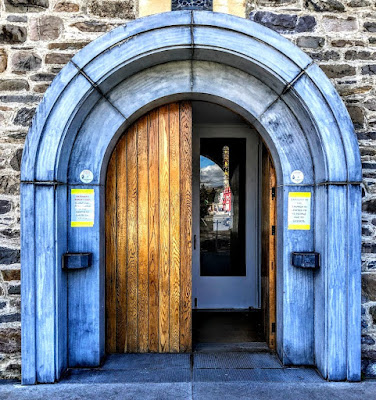 The demolition of the old church began in 1861, and Denis William Murphy (1799-1863), from Bantry, Co Cork, was the building contractor. But Murphy died suddenly before the foundation stone was laid. His eldest son William Martin Murphy (1845-1919), then a mere 19-year-old, took over the business and completed the building.

William Martin Murphy had laid the foundations for the fortune who built on by building railways and tram-tracks in England, Scotland and Argentina. He established the Irish Independent, was manager of the Dublin United Tramways Company, and played a controversial and antagonistic role in the workers’ strike and lockout in Dublin of 1913. He became the most hated man in Ireland before the outbreak of World War I.

The Bishop of Kerry, David Moriarty, blessed the foundation stone of the church in Sneem on 3 September 1863. He wrote in his diary that day: ‘Blessed the first stone on the new church in Sneem in honorem Sanctissimae Trinitatis et Sancti Michaelis Archangeli. Lord Dunraven, who donated the money for the church, was present. Dominus conservet eum et beatus faciat illium in terra! Father Michael Walsh, the most venerable of Irish priests PP, and Father Davis CC. A joyous day, bonfire and illuminations at night: I preached in English, and Archdeacon O’Sullivan in Irish. Lord Dunraven gave a very appropriate speech.’ 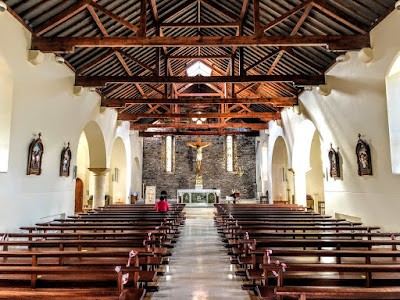 The Parish Priest of Sneem, Father Michael Walsh, was the subject of ‘Father O’Flynn,’ a celebrated ballad by the poet and songwriter, Arthur Perceval Graves (1846-1931). Graves was a son of Charles Graves (1812-1899), who had a summer residence home nearby at Parknasilla and who became Bishop of Limerick (1866-1899).

Local people packed the village for the ceremony that began at 1 p.m. The bishop and several clergy assembled on the Fair Green. The bishop led a procession to the site, and there they met the Earl of Dunraven. After the bishop preached, he blessed the foundation stone. Archdeacon O’Sullivan, from Kenmare, then stood on the foundation stone and spoke in Irish.

Lord Dunraven said he had travelled all over Ireland before deciding that Sneem was the place to build his holiday retreat. He recalled first going to Mass in the old church, and that while he was having his house built with every comfort, the House of God was ‘left desolate and in ruin.’ He praised the Bland family for leasing the site for the church, more land to plant the grounds, and refusing to take rent for the land. The original lease was for 91 years from Saint Michael’s Day, 29 September 1864, at a rent of one shilling a year. 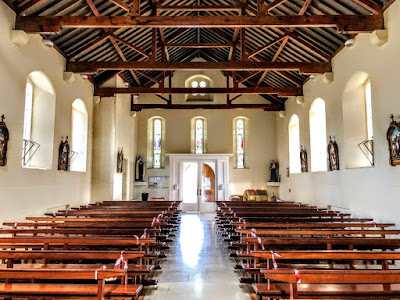 The contractors completed their work in less than two years. Bishop Moriarty returned to Sneem to open the new church on 27 July 1865 and to confirm 271 children. 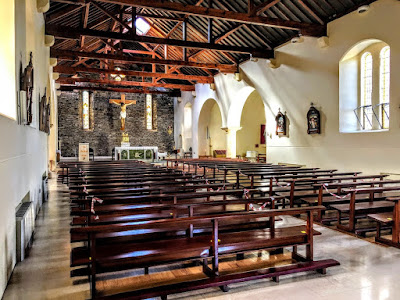 Saint Michael’s Church, Sneem, has an open-truss roof and round arches in the transepts on circular columns (Photograph: Patrick Comerford, 2020)

Father Walsh entertained the guests to dinner in his presbytery. To cope with the numbers, he borrowed cutlery and crockery from his friend Dean Charles Graves of Parknasilla, then Dean of the Chapel Royal, Dublin, and of Saint Brendan’s Cathedral, Clonfert, and about to become Church of Ireland Bishop of Limerick in 1865. Dean Graves was a guest too at the celebrations that night. Whenever Father Walsh entertained his own bishop, it is said, he would borrow the quality tableware from the Graves household, but never let the bishop know he was dining off ‘Protestant plates.’

Press reports said Lord Dunraven and the other dignitaries left at 11 p.m. But the parishioners continued the festivities until the next morning. One account said that during the whole night there was not the least sign of disorder, and not a single man was to be seen with the signs of liquor on him.

Father Walsh died a year after the new church was completed and after a 37-year ministry in Sneem.

Inside, the church has an open-truss roof, round arches in the transepts on circular columns, stained-glass windows and a marble font. 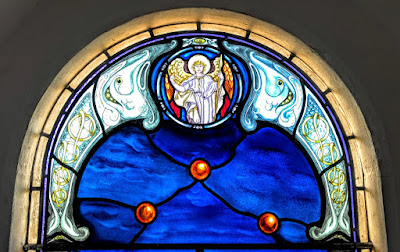 The roof was insulated and re-slated, underfloor insulation and modern heating were installed, the floor was renewed – uncovering a Victorian mosaic – and the joints in the external walls were repointed. The lighting and sound systems were upgraded, wheelchair and vehicular access were provided, and the former ‘Nuns’ Chapel’ or ‘small church’ as it was known, was transformed into the sacristy. A new spacious entrance now faces the village. These recent renovations cost €1.2 million in total. 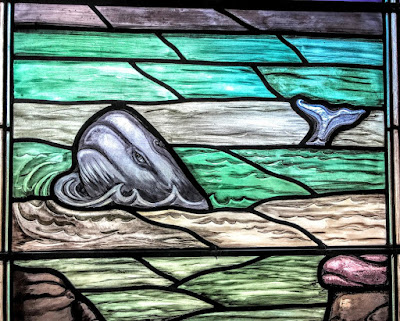 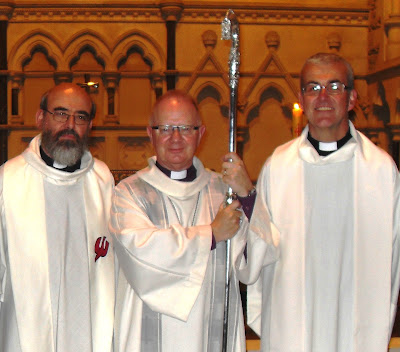 Bishop Kenneth Kearon visited the parish on Sunday 23 August, preaching at Morning Prayer in Castletown and presiding and preaching at the Parish Eucharist in Holy Trinity Church, Rathkeale.

The Covid-19 pandemic restrictions meant the traditional summer ‘Fifth Sunday’ united group service could not take place in the Rectory. Instead, this service took place on the Sunday 30 August in Holy Trinity Church, Rathkeale.

The parish reader, Siobhán Wheeler, preach at the this service, and the collection of over €120 is going to the Church of Ireland Bishops’ Appeal Fund special collection for Beirut following the recent devastating explosion in the port.

The consequences of the Covid-19 restrictions are difficult to predict in advance. But there are still hopes of holding our group Harvest Thanksgiving Service on Friday 2 October 2020 at 8 p.m., Holy Trinity Church, Rathkeale.

As this edition of Newslink goes to print, the Dean of Limerick, the Very Revd Niall Sloane, and Canon Patrick Comerford, are having a ‘pulpit swap’ on Sunday 20 September. 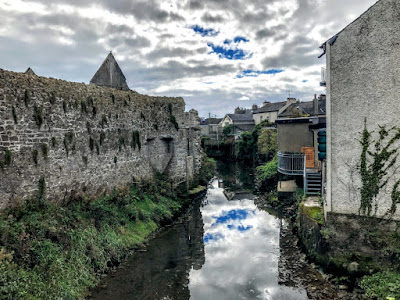 Askeaton Castle is open to visitors … are you interested in a parish visit?

After many years of dedicated restoration work, Askeaton Castle has reopened to the public, and remains open until the end of October. Due to current restrictions, visits are restricted to groups of six, but there are plans for a parish visit. Please talk to Patrick if you are interested.

Many people are now accepting that our homes are now our offices, but rectories have always doubled up as parish offices.

In recent weeks, the Rectory in Askeaton has once again been a hive of activity, with meetings of the USPG trustees, various school boards, clergy and the cathedral chapter, the Church of Ireland Interfaith Working Group and the Council for Christian Unity and Dialogue all at the centre of Zoom meetings that have had unusual insights into life in the Rectory.

This is an edited version of the Rathkeale and Kilnaughtin Group parish notes in the October 2020 edition of ‘Newslink,’ the Limerick and Killaloe diocesan magazine.