A taste of Paradise, a hint of
Crete and memories of the
‘Yellow Men’ of Loop Head 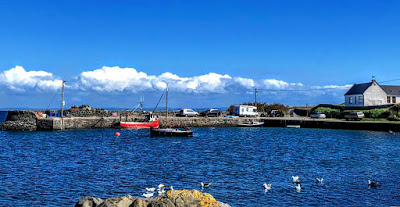 The pretty harbour at Kilbaha at the western end of the Loop Head peninsula in west Clare (Photograph: Patrick Comerford, 2020)

Following Sunday afternoon’s visit to Kilrush, two of us decided to avoid Kilkee – fearing, quite rightly, that the beach would be crowded despite advice about Covid-19 social distancing – and decided, for the first time ever, to explore Loop Head and the West Clare peninsula that juts out into the Atlantic.

By accident, we found ourselves by mid-afternoon in the small fishing village and harbour of Kilbaha (Cill Bheathach, ‘Church of the Birches’), close to the south-west end of Loop Head.

Kilbaha is the very last village on the Loop Head peninsula, about 6 km east of Loop Head and about 35 km west of Kilrush. This is a place of outstanding natural beauty, surrounded by the waters of the Atlantic Ocean and the River Shannon.

Kilbaha Bay is a small open sweep that looks south-east across the mouth of the Shannon Estuary towards Ballybunion in the distance on the north-west coast of Co Kerry. It is far from any major road: the N67 runs 25 km east of the village, and the nearest town is Kilkee. 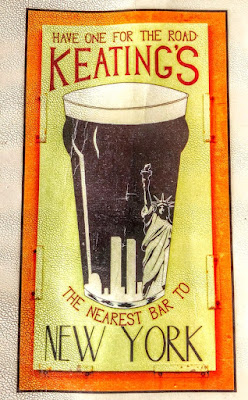 Keating’s claims to be ‘the nearest pub to New York’ (Photograph: Patrick Comerford, 2020)

We were given a table overlooking the harbour and the bay at Keating’s Bar and Restaurant on Pier Road. Keating’s was founded in 1879 and claims to be ‘the nearest bar to New York.’

Keating’s is run by husband and wife team Bernie and Helen Keating, and is known its locally caught, fresh seafood, as well as its warm welcome and traditional, family-friendly, atmosphere.

Sitting over lunch on a sunny, summer’s Sunday afternoon, sipping a glass of cold white wine, and looking out onto the small harbour, with blue seas and blue skies, I imagined myself transported to one of the taverns in Panormos, east of Rethymnon, on a Sunday afternoon in Crete, at the Sunset Taverna below the Fortezza in Rethymnon, or in a bar on the cliffs above the caldera in Santorini, and enjoyed a taste of paradise. 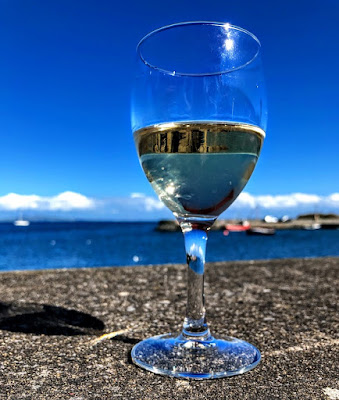 A taste of Paradise – or of Crete – on a summer’s afternoon in Kilbaha (Photograph: Patrick Comerford, 2020)

Around the headland from the pier, and visible as you approach the village from the east, is a castellated turret built by the Keane family for Victorian ladies to enjoy the view. The ruins of the Keane home stand nearby on the top of the hill.

The small, picturesque pier was built in the early 19th century to cater for local people making a living from fishing, seaweed gathering and piloting large ships up the Shannon to Limerick docks. It was also used by cargo vessels bringing supplies to Loop Head lighthouse. 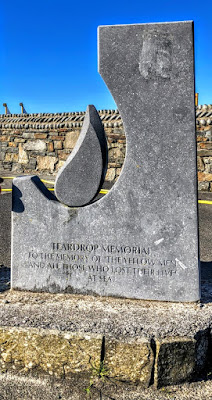 The Teardrop Memorial to the ‘Yellow Men’ who drowned near Kilbaha (Photograph: Patrick Comerford, 2020)

Over 100 shipwrecks have been recorded around the peninsula, and the Grave of the Yellow Men is a memorial to a group of sailors who died in Kilbaha Bay in the 19th century.

The names and nationality of these sailors are unknown, and they are referred to locally as the yellow men. Details are sketchy but they remain part of oral tradition in Kilbaha.

The nine or 11 ‘yellow men’ are buried in a mass grave looking over the Atlantic. It was originally thought that they were oriental, possibly from China or Japan – but only because of the phrase ‘yellow men.’

However, when the Spanish Armada landed in Ireland, the Spanish were referred to as ‘Yellow Men’ and local research suggests the men drowned here could have been from Spain or Portugal, or even to Morocco, Tunisia or Egypt would more likely be their point of departure.

The men either drowned or were smashed to pieces on the Kilcloher rocks, 1 km from Kilbaha, in the late 19th century.

The only surviving documentation is a school transcript of oral tradition dating from 1937-1938 and recorded by Stephen Hanrahan. It says that near Kilcloher ‘is the grave of the Yellow Men’ and that they were ‘nine shipwrecked Frenchmen’ who ‘were buried about 60 years ago.’

It was said their ship was in difficulties and they threw a rope ashore by which nine were saved. A local young man, however, cut part of this fine rope, which was considerably too long at first, so that when the ship drifted a little away from the shore, the cut rope was too short to save the others who were drowned.

The local community erected a memorial in July 2010 to commemorate the ‘Yellow Men.’

From there, we decided to head on to Loop Head and the Bridges of Ross. But we resolved that if we fail to get to Greece this summer, we must return to Kilbaha. 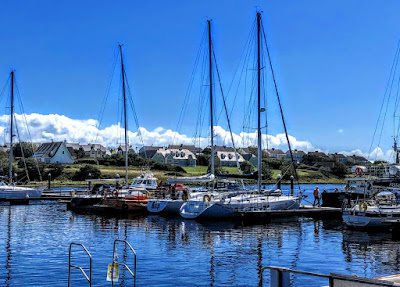 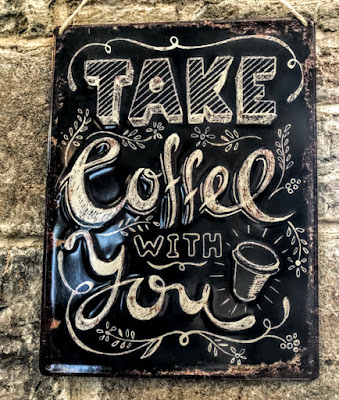 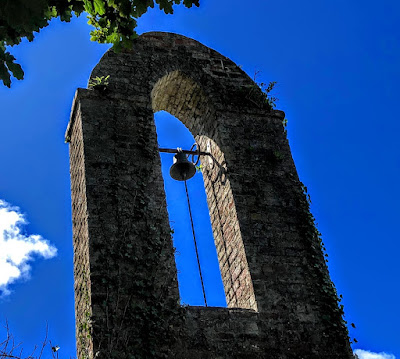 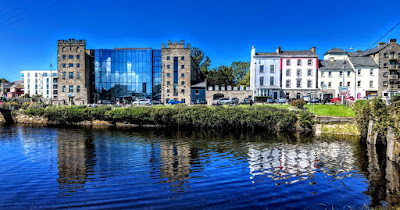