Dante and Beatrice meet Peter Damien, who tells of his life, and discusses predestination (miniature by Giovanni di Paolo), Canto 21

Saint Peter Damian, a Benedictine monk who strove to purify the Church during the early years of its second millennium, is recalled in the calendar of the Western Church today [21 February].

Pope Benedict XVI recently described him as “one of the most significant figures of the 11th century ... a lover of solitude and at the same time a fearless man of the Church, committed personally to the task of reform.”

Peter Damian was born ca1007 into a large family in Ravenna in Italy. He was still a child when both his father and his mother died. An older brother took the boy into his household, yet treated him poorly. But another of Peter’s brothers, a priest, took steps to provide for his education; and the priest’s own name, Damian, became his younger brother’s surname.

Peter excelled in school while also taking up forms of asceticism, such as fasting, wearing a hair shirt, and spending long hours in prayer with an emphasis on reciting the Psalms. He offered hospitality to the poor as a means of serving Christ, and eventually joined the Order of Saint Benedict.

He joined the Benedictines of the reform of Saint Romuald, in Fonte Avellana, near Gubbio, who lived a life of devotion to the Cross of Christ through a rigorous rule of life. They lived mainly on bread and water, prayed all 150 Psalms daily, and practiced many physical mortifications. Peter was excessive at first in embracing this way of life, which led to bouts of insomnia.

He was well-versed in the Bible and the writings of earlier theologians, and he became learned in theology and a skilled preacher. He studied theology and canon law, first in Ravenna, then in Faenza, and finally in Parma. By the age of 25, he was already a famous teacher in Parma and Ravenna. Around 1042, he wrote the life of Saint Romuald for the monks of Pietrapertosa.

The leaders of other monasteries sought his help to build up their monks in holiness, and in 1043 he became the Prior of Fonte Avellana. Five other hermitages were established under his direction.

At the time, the Church was beset by great corruption, including the sale of religious offices and immorality among many of the clergy. Through his writings and involvements in the debates of the day, the Prior of Fonte Avellana called on members of the hierarchy and religious orders to live out their commitments and to strive for holiness.

About 1050, during the reign of Pope Leo IX, Peter wrote a scathing treatise on the vices of the clergy, including the sexual abuse of minors and the actions by church superiors to hide those crimes.

In 1057, Pope Stephen IX decided to make Peter Damian a bishop, but he achieved this only by demanding the monk’s obedience under threat of excommunication. He was consecrated Bishop of Ostia in November 1057, when he was also made a cardinal, and he wrote to the College of Cardinals encouraging the members to set an example for the whole Church.

With the death of Pope Stephen in 1058 and the election of his successor Nicholas II, Peter Damien became more involved in the controversies in the Church. He supported Pope Nicholas against a rival claimant to the papacy, and went to Milan as the Pope’s representative. Church administration in Milan was so lax and corrupt that benefices were openly bought and sold and the clergy publicly married the women they lived with. In Milan, Peter Damian he confronted rioters who rejected papal authority.

Peter wished to withdraw from those controversies and to return to the contemplative life. But the death of Pope Nicholas in 1061 created another crisis over the papal succession, which Peter helped to resolve in favour of Pope Alexander II.

The new Pope sent Peter Damian on a series of journeys and negotiations for the next six years. In 1067, he was sent to Florence to settle the dispute between the bishop and the monks of Vallombrosa, who accused the bishop of simony. However, he misjudged the case and sided with the bishop, so that the dispute was not settled until the following year when the pope intervened in person.

He resigned as Bishop of Ostia in 1067 and retired to his monastery at Fonte Avellana. But in 1069 Pope Alexander sent him as the papal legate to Germany, where he called the Council of Frankfurt and persuaded the Emperor Henry IV to abandon his efforts to divorce the Empress Bertha.

Peter Damian lived in the monastery for another two years before making a pilgrimage to Monte Cassino, the birthplace of the Benedictine order. In 1072, he returned to his birthplace in Ravenna on a mission to reconcile the church there with the Pope.

On his return journey in February 1072, he became ill and lay ill for a week at the monastery of Santa Maria degl’Angeli, now Santa Maria Vecchia, near Faenza. On the night before the feast of the Chair of Saint Peter at Antioch, he ordered the office of the feast to be recited and at the end of the Lauds he died. He was immediately buried in the monastery church.

Although he was never formally canonised as a saint, Saint Peter Damian was celebrated as a saint after his death in many of the places associated with his life. Dante placed him in one of the highest circles of Paradise as a great predecessor of Saint Francis of Assisi.

In 1823, Pope Leo XII named him a Doctor of the Church and extended the observance of his feast day throughout the Western Church. Since 1898, his body has been kept in the Cathedral of Faenza.

Peter Damian in his own words:

“...Let us faithfully transmit to posterity the example of virtue which we have received from our forefathers.”

“It is not sinners, but the wicked who should despair; it is not the magnitude of one’s crime, but contempt of God that dashes one’s hopes.”

”The Master of Heaven has placed us under the precept of self-denial – this is the rule of true humility – that we follow the right path. In those early disciples, who became doctors of the world, Christ has given the model of all virtues. Thus, until the consummation of the world any faithful soul can direct their gaze towards them and imitate them. We follow these rivers from which flows life until we reach the Source. We walk behind the soldiers to meet the King, Jesus Christ, our Lord, who reigns with the Father and the Holy Spirit. Amen.” 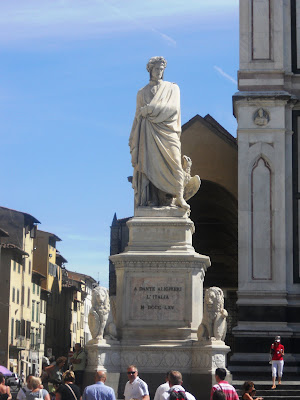 Dante’s statue in Florence ... Dante places Peter Damian in one of the highest circles of Paradise (Photograph: Patrick Comerford, 2012)

The mind, bright here, on earth is dulled and smoky.
Think: how, below, can mind see that which hides
even when mind is raised to Heaven’s height?

His words so curbed my query that I left
behind my questioning; and I drew back
and humbly asked that spirit who he was.

Not far from your homeland, between two shores
of Italy, the stony ridges rise
so high that, far below them, thunder roars.

These ridges for a hump called Catria;
a consecrated hermitage beneath
that peak was once devoted just to worship.

So his third speech to me began; then he
continued: There within that monastery,
in serving God, I gained tenacity:

with food that only olive juice had seasoned,
I could sustain with ease both heat and frost,
content within my contemplative thoughts.

That cloister used to offer souls to Heaven,
a fertile harvest, but it now is barren
as Heaven’s punishment will soon make plain.

There I was known as Peter Damian
and, on the Adriatic shore, was Peter
the Sinner when I served Our Lady’s House.

Not much of mortal life was left to me
when I was sought for, dragged to take that hat
which always passes down from bad to worse.

All-powerful God, help us to follow the teachings and example of Peter Damian. By making Christ and the service of his Church the first love of our lives, may we come to the joys of eternal light where he lives and reigns with you and the Holy Spirit, one God, for ever and ever. Amen.