Same-sex marriage: Why are faith groups
so concerned about civil legislation? 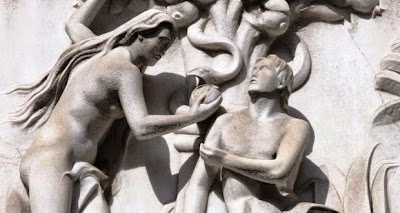 ‘Adam and Eve is often treated as providing the Biblical standard of marriage. But the Bible offers many different models of marriage, including marriages with and without children’ Photograph: Getty Images

A similar intervention has comes with “A Cross-Denominational Response”. The 50 signatories calling for a “No” vote include the Roman Catholic Bishop of Elphin, the Most Rev Kevin Doran, the Church of Ireland Bishop of Kilmore, the Right Rev Ferran Glenfield, and others who claim that “freedom of conscience will be challenged by a ‘Yes’ vote”.

The General Synod voted in 2012 that “marriage is in its purpose a union permanent . . . for better or worse, till death do them part, of one man with one woman, to the exclusion of all others on either side.” It goes on to affirm: “The Church of Ireland recognises for itself and of itself, no other understanding of marriage than that provided for in the totality of Canon 31.”

There is no one common, unchanging theological understanding of marriage shared by all faith traditions. Jewish teaching traditionally accepts a liberal approach to divorce, yet often applies severe sanctions to those who marry outside Judaism. The Muslim understanding of marriage, at least in the past, has tolerated polygamy. Adam and Eve is often treated as providing the biblical standard of marriage. But the Bible offers many different models of marriage, including marriages with and without children. Abraham had a wife and a consort; his grandson Jacob had two wives and two consorts; David had many wives, although their number is unknown; King Solomon had 700 wives and 300 concubines; and, of course, St Joseph and the Virgin Mary had a marriage that does not conform to today’s expectations of parenting and having children. In the Gospels, the only ground for a divorce is porneia or sexual immorality (Matthew 5: 32). Christ’s teaching challenged the easy-going divorce customs of his day. Later, St Paul added one other legitimate reason for divorce – the wilful desertion of a Christian by a non-Christian spouse (see I Corinthians 7: 15).

The Roman Catholic and Orthodox traditions, and many Anglicans too, hold that marriage is a sacrament. Christ regularly speaks about marriage and the wedding banquet as an image of the Kingdom of God, and many see sacramental marriage as a covenantal relationship that reflects Christ’s relationship with the Church. The Second Vatican Council shifted thinking about marriage from a juridical view to a more “personalist” approach, shifting the focus on the objective duties, rights and ends of marriage to an emphasis on the intimate, interpersonal love of the spouses. A similar development came about in the Anglican tradition, and new marriage services shift from the emphasis on having children, ordering society and preventing sin to the priorities of comfort, help, delight, tenderness and joy, with children as a blessing rather than a purpose.

Revd Canon Professor Patrick Comerford lectures in the Church of Ireland Theological Institute. He is writing in a personal capacity