A weekend in a ‘moral’ estate in Co Cavan 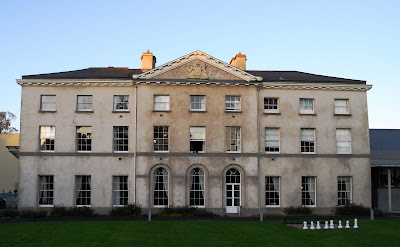 I am spending the weekend at the Radisson Blu Farnham Estate Hotel. Set in the Farnham Estate and its acres of rolling countryside, the hotel is just 3 km from Cavan town. I find the story of the Farnham estate and the Maxwell-Barry family interesting because of their connections with Bunclody, the home of this branch of the Comerford family for generations, and with Achill Island, once a favourite place of mine for solitude and opportunities for writing.

The Maxwell family is descended from the Very Revd Robert Maxwell, who came to Ireland at the end of the reign of Elizabeth I and became Dean of Armagh. His son, also Robert Maxwell, was Archdeacon of Down before becoming Bishop of Kilmore and Ardagh.

The title of Baron Farnham, of Farnham, Co Cavan, was given in 1756 to Bishop Maxwell’s grandson, John Maxwell (1687-1759), who had been MP for Cavan in the Irish House of Commons and who in 1719 had married a Co Wexford heiress, Judith Barry, daughter of James Barry of Newtonbarry.

His son, Robert Maxwell (1720-1779), 2nd Lord Farnham, was MP in the Irish House of Commons for Lisburn from 1743 to 1759, and was also elected MP for Taunton in Somerset (close to last night’s awful accident on the M5) at a by-election in 1754. He later described the campaign in Taunton as “a great deal of smoaking, some drinking, and kissing some hundreds of women; but it was to good purpose ... I may venture to say that I have now near 150 majority.”

He remained MP for Taunton until 1768, although there is no record he ever spoke in the Commons in London. Meanwhile, back in Ireland, he was given the additional titles of Viscount Farnham in 1760 and Earl of Farnham in 1763.

In the 1770s, about 100 labourers were employed in maintaining the landscape at Farnham. In 1777, the noted agricultural scientist and topographer Arthur Young said Farnham: was “one of the finest places that I have ever seen in Ireland.” He described the lakes nearby as being “uncommonly beautiful; extensive and have a shore extremely varied.”

Both titles died out when he died in 1779. His brother and successor, Barry Maxwell (1723-1800), 3rd Baron Farnham, had been MP for Cavan and Armagh before he too was made Viscount Farnham in 1781 and Earl of Farnham in 1785. He had changed his surname from Maxwell to Barry in 1771 when he inherited the estates of his maternal grandfather, but resumed the Maxwell name on inheriting his titles eight years later.

In 1795, Farnham asked James Wyatt, one of the most fashionable architects of the day, to design three ceilings. Although there is no evidence they were installed at Farnham, his plans are in the Metropolitan Museum of Art in New York. Wyatt carried out some work at Farnham around 1795 and a library case he designed stands in an alcove on the staircase landing. 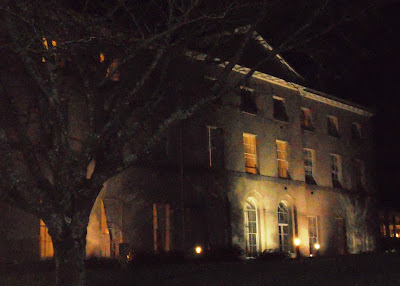 Farnham House and the Radisson Blu Farnham Estate Hotel under the moonlight and the stars this evening (Photograph: Patrick Comerford

John James Maxwell (1760-1823), succeeded his father as 2nd Earl of Farnham in 1800. Two years later, he asked Francis Johnston, who also designed the GPO in Dublin, to complete an extension to the house, providing a new building at the south-west garden front. This is the surviving Farnham House, now incorporated as the centre-piece of the hotel complex. About the same time, the Farnham coat of arms, quartering the arms of the Maxwell and Barry families, were set in the façade of the house, along with the Farnham motto was Je suis prêt (“I am ready”).

He had no children and when he died in 1823 the new titles died out once again, while the older title passed to his first cousin, John Maxwell-Barry (1767-1838) of Netownbarry, Co Wexford, who became the 5th Baron Farnham. He was the son of Bishop Henry Maxwell of Meath, and sat as an MP for Doneraile and Limavaddy in the Irish Commons, where he voted against the Act of Union. He was described as a “man in whom sectarian fanaticism spoiled a good patriot.” Later he was an MP for Co Cavan in the British House of Commons. 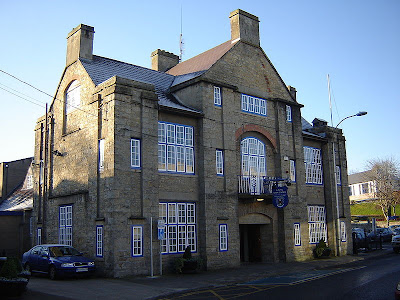 In 1823, a new system of management was introduced on the Farnham estate, with the employment of inspectors of districts, buildings, bog and land and a moral agent. The main duties of the moral agent were to encourage the tenants to adhere to the main principles in Lord Farnham’s address to them, including observing the Lord’s Day, educating their children, giving their children a strict moral sense, and ensuring they abstained from cursing and the distillation or consumption of alcohol.

Farnham’s moral agents included the Revd William Krause, later he preacher at the Bethesda Chapel, in Dublin, known as the ‘Cathedral of Methodism.’ Krause was also an early influence on the Achill missionary, the Revd Edward Nangle, while he was the curate of Arva.

When the 2nd Earl of Farnham, died at the Pulteney Hotel in London in 1823, he was brought back to Cavan for burial. His successor, John Maxwell-Barry (1767-1838), the 5th Lord Farnham, was a son of Bishopp Henry Maxwell of Meath. He died in Paris, 1838, and was brought back to Co Wexford to be buried in Newtownbarry. His brother, the Revd Henry Maxwell (1774-1838), was 6th Lord Farnham, but held the title for less than a month before he died. His son, Henry Maxwell (1799-1868), 7th Lord Farnham, who succeeded in 1838, also sat as an MP for Co Cavan. He and his wife, Anna Stapleton, were keen supporters of Nangle’s Achill mission, and a number of families from Cavan moved to Achill Island, including the Sherridans.

A statue in Cavan commemorating Henry Maxwell (1799-1868), 7th Lord Farnham, who was killed in the Abergele train disaster in 1868 (Photograph: Patrick Comerford, 2011)

Lord and Lady Farnham were killed in the Abergele train disaster in 1868. Later, a statue was erected in his honour in Cavan town by his tenants, and this now stands in front of the new Johnston Library. The title then passed in turn to his brothers, Somerset Richard Maxwell (1803-1884), 8th Lord Farnham, and James Pierce Maxwell (1813-1896), 9th Lord Farnham, who also succeeded to a distant relative’s title as a baronet.

When dry rot was discovered in Farnham House in 1961, the oldest part of the house, looking out across the parkland, and the additions built in 1839, were demolished. In 1995, Barry Owen Somerset Maxwell, 12th Baron Farnham (1931-2001), abandoned farming and leased the agricultural lands to local farmers.

The 12th Baron Farnham, was due to retire on his 70th birthday, but he died on 22 March 2001, a few days before this planned retirement. His widow, Diana, Lady Farnham, sold the house and the estate to a local entrepreneur, Roy McCabe, and they have since been converted into this luxury hotel and leisure complex. The Maxwell-Barry titles are now held by Simon Kenlis Maxwell, 13th Lord Farnham and 15th Baronet, who lives in Oxfordshire. 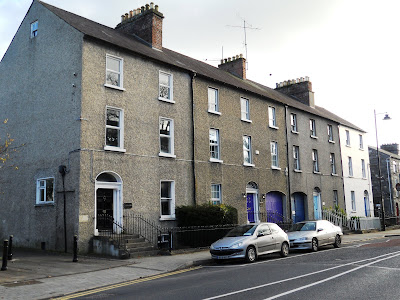 This afternoon, I strolled around Cavan town,where the Farnhams are still remembered in Farnham Street, one of the main streets, and in the Farnham Arms, an hotel with the family coat of arms, including the motto Je suis prêt (“I am ready”), above the door.

In the early 19th century, Cavan’s streets were transformed by the Farnhams, who built Farnham Street as a new wide street to cater for the burgeoning coach trade. As the 19th century developed, Farnham Street was lined with comfortable town houses and public buildings such as the Court House, built in 1825 at a cost of £12,000. The original Farnham Arms was built as a coaching inn in 1816 along the newly laid-out Farnham Street, but closed during the famine. The site in Farnham Street was later used as a school and a fire station and now houses the county library. 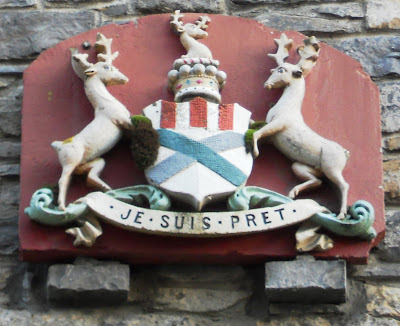 The Farnham arms on the Farnham Arms Hotel in the centre of Cavan (Photograph: Patrick Comerford, 2011)

In the early 1830s, the widow of the 4th Lord Farnham set aside land on the east side of Farnham Street as a public park, with walkways, fountains and a park keeper’s lodge. However, the park was neglected in later years and its lands were absorbed into other developments.

The entry to Cavan’s central market was marked by an arch and was originally the town’s courthouse. But in 1827 it was turned into a market house by Lord Farnham. In 1855 the “new Market Square” from the Main Street to the Farnham Gardens was opened to the public. Cavan Methodist Church was built on Farnham Street in 1874, but it closed in the early 1970s.

Bunclody, Co Wexford ... once known as Newtownbarry, was named after the Barry-Maxwell family (Photograph: Patrick Comerford)

In Co Wexford, Newtownbarry (present-day Bunclody) owes its origin and name to the Barry family. The estate passed to John Maxwell, MP for Co Cavan and subsequently the 1st Lord Farnham, in 1719 when he married the daughter the Barry heiress, Judith Barry. She died in 1771, and was buried in Christ Church Cathedral, Dublin. The town was known as Newtownbarry in her honour until after 1922.

Bishop Henry Maxwell of Meath inherited Newtownbarry as his portion of the family inheritance, and he is commemorated in a plaque in Saint Mary’s, the Church of Ireland parish church. His wife enlarged the local school in 1814 by the trustees and Lady Farnham, who also presented to it a lending library of 200 volumes for the use of the parish.

Bishop Maxwell’s son, John Maxwell-Barry, assumed his grandmother’s family name when he inherited the Newtownbarry estates. He built a new house, Woodfield, and in 1823, he succeeded as the 5th Lord Farnham.

Newtownbarry remained part of Farnham estate until it was sold to the Ashton family, and they, in turn, sold it to the Hall-Dare family. In 1855, Patrick Comerford, Robert Comerford and Mary Comerford were tenants of Robert Westley Hall-Dare. Between 1863 and 1869, the Hall-Dare family built Newtownbarry House. This new house, on the site of Woodfield, was designed by the Belfast architect Sir Charles Lanyon (1813-1889), assisted by WH Lynn (1829-1915) and his son John.

Posted by Patrick Comerford at 18:00 3 comments: