‘Marriage of heart and longings that aspire,
a bond of roses, and a ring of fire’ 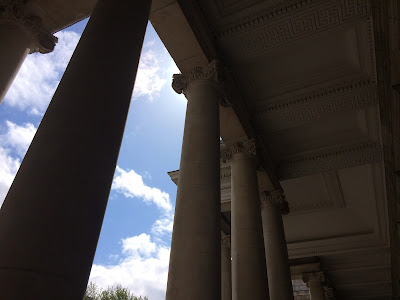 This is one of my weeks as canon-in-residence in Christ Church Cathedral, Dublin. I preached at the Cathedral Eucharist on Sunday morning [24 May 2015], and I was in the Cathedral for Choral Evensong this evening, when I read the second reading (Romans 8: 1-8).

This evening’s canticles, Magnificat and Nunc Dimittis were from the Collegium Regale setting by Herbert Howells (1892-1983).

A major formative experience for Howells in his youth was the premiere in 1910 at the Gloucester Three Choirs Festival of Ralph Vaughan Williams’s Fantasia on a Theme of Thomas Tallis. Howells liked to relate in after years how Vaughan Williams sat next to him for the remainder of the concert and shared his score of Edward Elgar’s The Dream of Gerontius.

Throughout his career, Howells was profoundly influenced by both Vaughan Williams and the Tudor composers, including.

In August 1941, at the height of World War II, Howells was invited to become the acting organist of Saint John’s College, Cambridge. His association with Cambridge, which lasted until the end of the war in 1945, was a productive and happy period for Howells, and led directly to the works for which he is most remembered.

Howells later recalled how he was challenged by the Dean of King’s College, Eric Milner-White, to write a set of canticles for the choir. The result was the Te Deum and Jubilate for the service known as Collegium Regale, performed in 1944. Howells followed this the following year with the Magnificat and Nunc Dimittis that were sung exquisitely by the cathedral choir in Christ Church this evening.

This evening’s anthem was a setting by Howells of the poem ‘A Hymn for Saint Cecilia’ by Ursula Vaughan Williams (1911-2007), the second wife and biographer of Vaughan Williams:

Sing for the morning’s joy, Cecilia, sing,
in words of youth and praises of the Spring,
walk the bright colonnades by fountains’ spray,
and sing as sunlight fills the waking day;
till angels, voyaging in upper air,
pause on a wing and gather the clear sound
into celestial joy, wound and unwound,
a silver chain, or golden as your hair.

Sing for your loves of heaven and of earth,
in words of music, and each word a truth;
marriage of heart and longings that aspire,
a bond of roses, and a ring of fire.
Your summertime grows short and fades away,
terror must gather to a martyr’s death;
but never tremble, the last indrawn breath
remembers music as an echo may.

Through the cold aftermath of centuries,
Cecilia’s music dances in the skies;
lend us a fragment of the immortal air,
that with your choiring angels we may share,
a word to light us thro’ time-fettered night,
water of fife, or rose of paradise,
so from the earth another song shall rise
to meet your own in heaven’s long delight.

Those words, “a bond of roses, and a ring of fire,” had a resonance with me as I sat enthralled in my chapter stall this evening, for in my sermon on Sunday marking the Day of Pentecost chapter, I had quoted TS Eliot’s words in his Pentecost poem ‘Little Gidding’:

When the tongues of flame are in-folded Into the crowned knot of fire
And the fire and the rose are one. 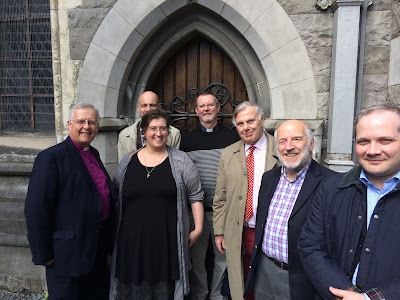 Seven visitors from the Four Nations Forum at the door of the Chapter House in Christ Church Cathedral (Photograph: Patrick Comerford, 2015)

Earlier in the afternoon, I brought seven visitors to Christ Church Cathedral. They were among the delegates who had been in the Church of Ireland Theological Institute this week for the Four Nations Faith and Order Consultation.

The consultation was hosted by the Church of Ireland, and also included representatives from the Church of England, the Church in Wales and the Scottish Episcopal Church. They took part in a wide range of discussions, including a shared study based around the question: “What is the Church, what is the gospel, what is mission and how do they relate with practice.”

We also visited Dublin Castle, the Chapel Royal, City Hall, the former House of Lords and House of Commons in the Bank of Ireland, College Green, and the Library in Trinity College Dublin, where we saw the Book of Kells and the Book of Durrow.

From TCD, we strolled up Kildare Street to see Leinster House (Parliament), down through Grafton Street and the buskers, by the Molly Malone Statue on the corner of Suffolk Street and Saint Andrew Street, and then through Temple Bar, stopping for coffee before returning to Christ Church Cathedral.

It certainly was a very different but interesting day in the week of a canon-in-residence.