Searching for Pugin in the ‘navel of Ireland’ 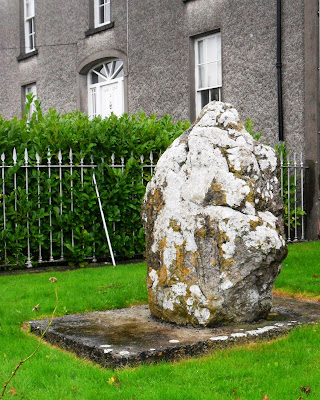 After a very creative and innovative Morning Prayer in the institute chapel this morning, two of us headed off on a two-hour drive to Birr, Co Offaly.

Birr regards itself as the centre of Ireland – in the late 12th century Giraldus Cambrensis referred to the Birr Stone as umbilicus Hiberniae, the navel of Ireland. The stone is a block of limestone around 250 million years old, and was probably part of a megalithic monument. It is said to have marked a meeting place of the Fianna, and was taken from Birr in 1828 and was used as a Mass rock, but returned to Birr in 1974.

I can only remember being here two or three times in the past, and – apart from passing through five or six years ago – it must be 25 years or more since I was last in Birr. I returned today to take some architectural photographs.

Birr is one of the finest examples of a Georgian town in Ireland. It is a virtually intact 18th and 19th century town, with spacious Georgian houses lining its tree-lined streets, malls and avenues. This Georgian architecture is complemented by monuments to some of the Earls of Rosse, including William Parsons (1800-1867), the third Earl of Rosse, a renowned astronomer who built what was once the world’s largest telescope in the grounds of Birr Castle.

Birr Castle has been the seat of the Parsons family and the Earls of Rosse for 14 generations, since it was granted to Sir Laurence Parsons in 1619. While Offaly was known as King’s County, Birr was known as Parsonstown.

Birr stands on the banks of the River Camcor, and the first recorded evidence of a settlement there dates from the 6th century AD, when a monastery was founded by Saint Brendan of Birr. An important work from this monastery is the illuminated text known as the Macregol Gospels or the Book of Birr, now in the Bodleian Library, Oxford. 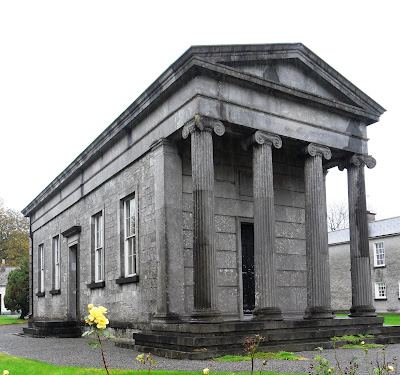 John’s Hall, built in the style of a Greek temple to commemorate the Hon John Parsons (Photograph: Patrick Comerford, 2010)

We parked the car on John’s Mall, close to the statue of the astronomer earl, and John’s Hall, built in the style of a Greek temple to commemorate his brother, John Parsons, who died young.

In Dooly’s Hotel on Emmet Square, one of the Ireland’s oldest coaching inns, an exceptionally helpful receptionist pointed us to the building I had come to photograph: the Convent of Mercy on Wilmer Road, which had been built by AWN Pugin in the mid 19th century. 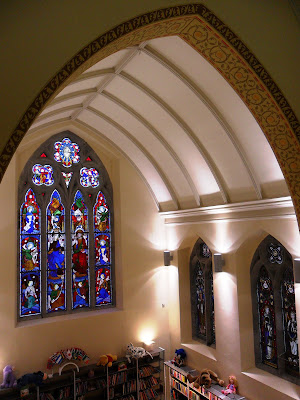 The interior of the beautifully restored Convent Chapel in Birr, designed by Pugin and now a library (Photograph: Patrick Comerford, 2010)

In recent decades, most of the convent has been converted by Offaly County Council to civic offices and a public library. Martina Needham, executive librarian, Offaly County Library, welcomed us and guided us around the former convent, which was built in stages from 1845 to 1856.

Mother Catherine McAuley, the founder of the Sisters of Mercy, came to Birr in 1840 to help her sisters set up was to be called Saint John’s Convent of Mercy.

Catherine McAuley founded the Sisters of Mercy in Dublin in 1831 to “care for the poor, sick and ignorant.” She established the first Mercy convent in England in Bermondsey in London, and this was Pugin’s first convent too. However, it was one of Pugin’s early failures, and Catherine McAuley complained that the convent, built in 1839-1840, was “not well suited” to her community: she complained to Bishop Walsh that “the sleeping rooms are too large, the corridors confined and not well-lighted, and all the Gothic work made it expensive.”

Pugin was given a second chance in 1840 when the Hardman family offered to pay for another Convent of Mercy near their home in Handsworth on the edges of Birmingham. At the time, Pugin was working on Saint Giles’ in Cheadle. Hardman donated the site, and paid £5,535 for the building and furnishings; the Earl of Shrewsbury donated a further £2,000. This was the first Mercy convent in the English Midlands and Hardman’s daughter, the future Mother Mary Juliana Hardman (1813-1884), who was one of the first Mercy Sisters in Handsworth, eventually became the Mother Superior.

Michael Fisher and Roderick O’Donnell have discovered a letter from Pugin to Herbert Minton, dated 19 September 1840, suggesting that the tiled floor in Handsworth was the first occasion the great architect and the great tilemaker collaborated.

Pugin’s convent in Handsworth was such a success that Catherine McAuley finally saw it she was charmed and described it as “this beautiful convent erected by Mr Pugin in the ancient monastic style.” She said “all is so admirable … no want can be felt.” It is surprising then, that Pugin only designed one convent for the Sisters of Mercy in Ireland. 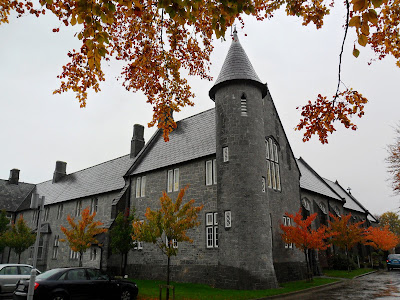 Birr Convent was built by Pugin along the lines of his convent in Handsworth ... with the addition of an Irish round tower (Photograph: Patrick Comerford, 2010)

The foundation stone for his convent in Birr was laid in 1846, although the first portions were not built until 1847. The design is a heavy, stone version of the convents he had built in Handsworth and Liverpool. But Pugin also paid tribute to Irish architectural heritage by attaching a Round Tower to the corner of the building.

The convent was still not complete when Pugin died in 1852. The main front resembles his design, but the larger part of the building was finally completed with slightly different massings by his son, E.W. Pugin, and his son-in-law, George Ashlin.

The Pugin-designed convent chapel was greatly revised at a later stage. When the convent closed, the altars and the furnishings were donated to neighbouring churches or auctioned off. But the convent and chapel have been converted to accommodate a modern library, council offices and a health centre, and many of the original Pugin features have been carefully preserved or restored.

I wonder how many Irish towns can boast such a splendid state-of-the-art library in a Gothic Revival chapel with beamed roof, restored and storm-glazed stained glass windows, a restored ceiling and stencilled mural motifs and lettering. The cloister area has been restored and the library exhibits included a facsimile of the Mcregol Gospels, a modern illuminated vellum manuscript copy of Cáin Adomnáin, a replica of an early Christian bell and other treasures. 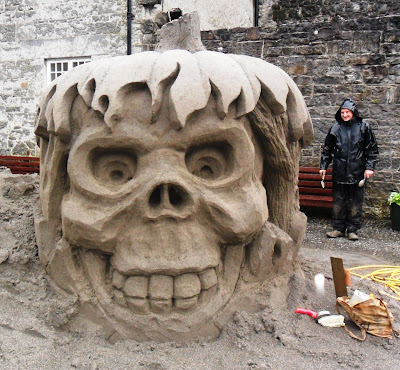 A sand sculpture with a Halloween theme in the grounds of Birr Castle (Photograph: Patrick Comerford, 2010)

From the convent, we headed up to Birr Castle for lunch in the courtyard, where a sculptor was working on a sand sculpture with a Halloween theme. By now the rain was bucketing down. Autumn had come to a wet close, and winter is now threatening.

Instead of wandering around the castle grounds in the rain, we promised to return and headed off to Maynooth to continue photographing the work there by Pugin and McCarthy.

Patrick Comerford is Director of Spiritual Formation, the Church of Ireland Theological Institute, and a canon of Christ Church Cathedral, Dublin