Postures in prayer that are
shared among faith traditions 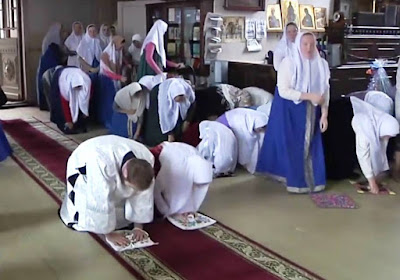 Earlier this week, I brought a group of students on a field trip to the Irish Islamic Cultural Centre and mosque in Clonskeagh, where we received a warm welcome from my friend, the Muslim theologian Dr Ali Selim.

It is interesting the way some people are expressing their received prejudices about Muslims today, including negative comments about the way women dress, and the bodily postures men use for prayer. So I was surprised to come across this photograph on social media.

This is not a photograph of Muslim men at prayer, with Muslim women watching them. This photograph was taken in an “Old Believer” Orthodox Church in Russia, and the Christians in this photograph include men who are kneeling, with foreheads touching the ground, and women wearing long dresses with full head coverings.

The Jewish scriptures (Tanakh) forbid using the pagan practice of kneeling on a stone to pray (Leviticus 26: 1). Idol-worshipers often placed a special stone before their idol and then used it to kneel upon while they prayed to their idols, and so Jews normally stand rather than kneel for daily prayer.

However, Jewish Law suggests that if you put an intervening substance between your knees and the stone floor then it is permitted to kneel. So, on Yom Kippur, when Orthodox Jews knelt and bowed down with their faces to the floor, people brought towels to kneel on, since many synagogues (especially in Israel) had stone or tile floors.

Kneeling and prostration is actually quite common in the Torah, and it is not uncommon for major characters tend to “fall on their faces” before God. However, it was never universally embraced by rabbinical authorities as a regular practice. With the notable exception of Maimonides, most mediaeval Jewish authorities discouraged regular kneeling and prostration during the Middle Ages – perhaps to differentiate Judaism from Christianity and Islam.

While bowing from the knees is common in Ashkenazic Jewish tradition, in the daily Amidah or Aleinu prayers, kneeling or full prostration occurs only during Rosh Hanshanah Musaf and Yom Kippur Avodah services – and then only among more observant Jews, and eventually the towels were replaced with prayer rugs.

Prostration remains a common practice among Karaite Jews, and was normal in the Christian Middle East. It still survives in many Christian communities and in Russia. Prayer mats, were extensively used by the Christians then and now and by monks as far apart as Syria, India, Mount Athos, Romania and Russia.

It is a practice that the Muslim Prophet Muhammad would have seen observed by the Syriac Nestorian monk Bahira (or Sergius) in Bosra and by other Eastern monks in Syria.

The Council of Nicaea in AD 325 forbade kneeling on Sundays, because penitential prayer is not appropriate during a celebration of the Resurrection. But, Sundays apart, the modern Orthodox saint, Saint Paisios of Mount Athos, is attributed with saying: “Prayer without prostration is cold and not pleasing to God!”

Saint Paisios (1924-1994), who originated born in Pharasa, Cappadocia, was canonised earlier this year [13 January 2015] by the Holy Synod of the Ecumenical Patriarchate, and the Orthodox Church commemorates his feast day on 12 July.

But this is a practice that is part of the shared Christian tradition. Even John Calvin, in his commentary on the Book of Daniel, notes how the Prophet Daniel kneels in prayer, and comments: “He prostrated himself on his knees; not that bending the knee is necessary in prayer, but while we need aids to devotion, as we have said, that posture is of importance. First of all it reminds us of our inability to stand before God, unless with humility and reverence; then, our minds are better prepared for serious entreaty, and this symbol of worship is pleasing to God.”

The Prayer of St Ephraim:

O Lord and Master of my life, give me not the spirit of sloth, needless meddling, lust for power and idle talk.

But grant unto me, your servant, a spirit of sound discretion, humility, patience and love.

Yes, O Lord and King, grant me to see my own faults and not to condemn my brother, for you are blessed unto the ages of ages. Amen.

Waiting in Advent 2015 with
Dietrich Bonhoeffer (17) 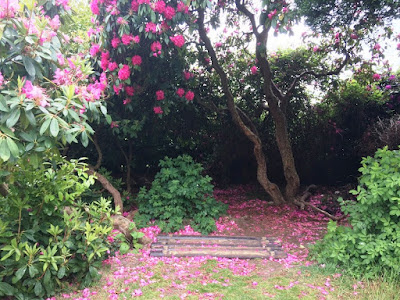 ‘Meditation is not having great thoughts’ … a quiet corner in the garden of the Hedgehog Vintage Inn, Lichfield (Photograph: Patrick Comerford, 2015)

Thinking about meditation, Bonhoeffer once wrote in The Way to Freedom, 1935-1939:

“Meditation is not having great thoughts, but loving the words you hear and letting them shape you.”

They are words that I find have their parallel in words of TS Eliot in Burnt Norton, where he writes:

… Words, after speech, reach
Into the silence. Only by the form, the pattern,
Can words or music reach
The stillness …