A funeral on Trinity Sunday in Ballinrobe ... the oldest town in Mayo 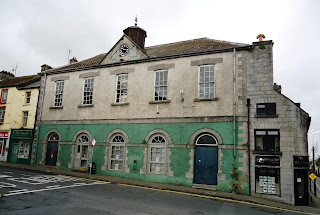 Ballinrobe is said to be the oldest town in Co Mayo and the old Market House was built in 1752 (Photograph: Patrick Comerford, 2013)

I had planned to be in Christ Church Cathedral this morning for the Festival Eucharist on Trinity Sunday. Instead, I was in Ballinrobe, Co Mayo, for the funeral of a friend’s mother.

At the funeral mass in Saint Mary’s Church, the parish priest, Father Conal Eustace, managed to both celebrate this Feastday of the Holy Trinity, with a clear exposition of Sophia and the Wisdom of God, and to preach a proper and appropriate funeral sermon. 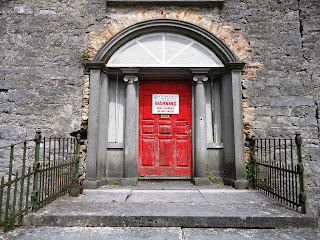 A period house in a sad state of decay on the western edges of Ballinrobe (Photograph: Patrick Comerford, 2013)

Although many of the houses and shops on High Street and Bridge Street are in a sad state of decay, the rest of Ballinrobe is a thriving market town, and it also serves a dormitory town for both Galway and Castlebar.

But Ballinrobe dates back to 1390 and is said to be the oldest town in Co Mayo. The town developed as an important economic centre in south-west Mayo after King James I granted a Royal Charter in 1606 for fairs and markets in Ballinrobe. The old Market House was built in 1752.

Ballinrobe Racecourse is the only racecourse in Co Mayo. There are records of meetings as far back as 1774, and there is a two-day meeting tomorrow [Monday] and one Tuesday evening. 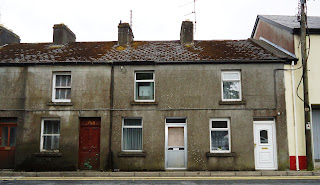 Ballinrobe’s famous residents include Dr Noel Browne (1915-1997), the former Minister for Health, who lived in Church Lane in his youth, and Captain Charles Cunningham Boycott (1832-1897), a local land agent whose ostracism by the local people of gave the word “boycott” to the English language.

The intrepid Henry Blosse Lynch (1807-1873) came from Partry House in Ballinrobe. He became a midshipman in the Indian navy in 1823, and served in the Persian Gulf, learning to speak Arabic and Persian. When he was shipwrecked in the Red Sea in 1832, Lynch crossed the Nubian Desert and followed the Nile down into Egypt. Two years later, he accompanied Francis Chesney on his exploration of the River Euphrates. In 1837, he mapped the course of the Tigris from its source in Armenia to Baghdad. Later, Lynch commanded a squadron of the Indian Navy during the second Burmese War. He retired in 1856, settling in Paris where he died in 1873.

This morning’s funeral was in Saint Mary’s Roman Catholic Church on Main Street. The church, which dates from 1853, has eight pairs of low light windows by Harry Clarke that were commissioned by Monsignor d’Alton in 1924. The windows depict scenes from the life of Christ and the Virgin Mary, and eight Irish saints. 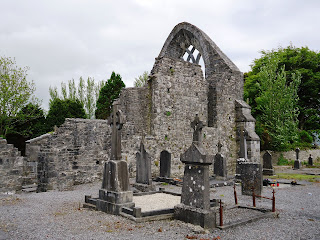 The ruined Augustinian Abbey on the north side of Ballinrobe, said to be the first Augustinian friary west of the Shannon (Photograph: Patrick Comerford, 2013)

The Augustinian Abbey is off Abbey Street on the Cloongowla Road, just above the former flood plains of the River Robe. This was the first Augustinian friary west of the Shannon, and is said to have been founded ca 1312 by Elizabeth de Clare, grand-daughter of King Edward I and wife of John de Burgh. She is said to have built the friary to celebrate the birth of her first son William. However, an unpublished history in the Augustinian archives in Dublin says the abbey was founded in 1337 by Roger Taaffe.

In 1400, Pope Boniface IX granted indulgences anyone who assisted in the conservation and repair of the friary. But when a fire damaged the friary in 1413, the community was reduced to poverty once again.

The Abbey survived into the late 17th century, and it said Mass was celebrated in the abbey as late as 1692.
The ruined church is surrounded by a graveyard. The church ruins consist of a nave and chancel. Parts of the west doorway with rope fluting are original, while the window overhead was retrieved from the east gable. The east tracery window is not original, but was reconstructed based on original fragments. 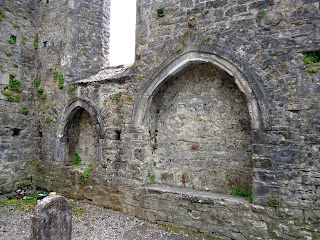 A piscinia and sedilia on the south wall of the ruined Augustinian church in Ballinrobe (Photograph: Patrick Comerford, 2013)

On the south wall, there are two paired piscinias and sedilias. Also on the south wall, splayed windows contain two distinct mason marks. A building on the north-east outside corner of church may have been the chapter house. It is accessed through a doorway and steps in the north wall.

A narrow doorway on the north wall gives access to a square chapel with widely splayed embrasure containing a narrow light window. A cross slab was found beneath the west doorway during excavations.

The Knights Hospitallers also had a house and chapel near the Abbey in Ballinrobe. One of the Hospitallers, Stephen de Fulburn, became Archbishop of Tuam in 1286, while still the King’s Viceroy; he died in 1288. 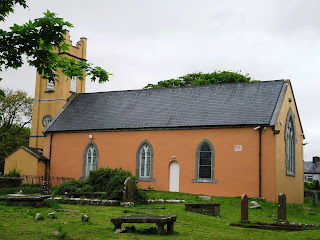 The former Church of Ireland parish church, Saint Mary’s, now houses the local library, approached through a large archway on the Main Street, and a second entrance from Church Lane. Mayo County Council leased the building from the Church of Ireland in the early 1990s, and the new library opened in the renovated building in 1996.

Saint Mary’s is a typical early 19th century Board of First Fruits church. It is a simple, oblong, gable-ended structure, with a hammer-beam roof, a Welland-designed pulpit. A steeple erected on a tower around 1815 lasted for only nine years.

In 1834, the Church of Ireland population of Ballinrobe numbered about 500, and the graveyard, the memorials inside the church, the stained-glass windows and the wall plaques recall parishioners who lived, worked and contributed to the social fabric of Ballinrobe. 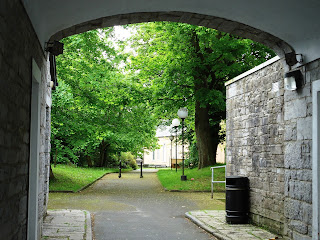 The locked arch on Main Street providing access to the library in the former Saint Mary’s Church (Photograph: Patrick Comerford, 2013)

Unfortunately, the library was locked this morning, but I believe the stained-glass windows inside Saint Mary’s include a large stained-glass memorial window at the east end, with two smaller ones on the north and west walls. The main window commemorates Colonel Charles Knox (1817-1867) of Cranmore. In 1839, he married Lady Louisa Catherine Browne, daughter of Howe Peter, 2nd Marquess of Sligo. She died in 1891 and is remembered in a brass plaque below the window, which has three panels representing: the Ascension (centre), the Light of the World (left), based on Holman Holt’s famous painting, and the Good Shepherd (right). The other windows commemorate Major Charles William Cuff Knox, who died in1910, and Charles Howe Cuff Knox, who died in 1921.

There are eight wall monuments inside Saint Mary’s, the earliest recalling James Cuff (1828), and the last commemorating Miss Dorothy Hearne, who was a member of the library for many years and played a vital role in the church becoming a library.

The library is surrounded by the old graveyard, of Saint Mary’s. There are over 225 legibly named burials. The earliest recorded burial was in 1668 of Katherine Holcroft, wife of Sir Charles Holcroft, a ‘Loughrea Commissioner’ involved in overseeing the transfer of land to the transplanted in Connaught. Her grave is marked with a carved skull and crossbones above the inscription and her family’s coat of arms. The next oldest gravestones are of those of Hugh Evans (1718) and William Smith (1719).

The graveyard is falling into a sad state of disrepair, but remains a tranquil oasis in the centre of Ballinrobe.

After the funeral, I spent the afternoon in Cong, on the edges of Connemara, visiting the abbey, Ashford Castle, and the locations of the 1950s film, The Quiet Man, and the shores of Lough Corrib and Lough Mask. After returning briefly to Ballinrobe, I then visited the ruins of Annaghdown Cathedral. But these are stories for another day.