Back to the beaches of Skerries 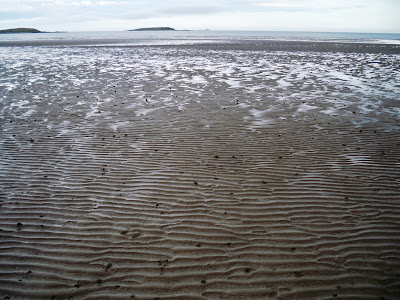 Sand ripples on the South Beach in Skerries this evening (Photograph: Patrick Comerford, 2010)

It was good to be back in Christ Church Cathedral this morning for the Cathedral Eucharist. This morning’s setting for the Choral Eucharist was Darke in F, sung by the University of Bristol Church Choir, Saint Paul’s Church, Clifton, and after Communion they also sang Rachmaninov’s Bogoroditse dyievo (Ave Maria).

Most of the choir members are undergraduates, and this was brave setting for them, giving us a heavenly rendition of Darke’s Sanctus.

The English composer Harold Darke (1888-1976) had studied under the Irish-born composer, Charles Villiers Stanford, and later was a champion of both Ralph Vaughan Williams and Charles Hubert Parry when they were relatively unknown composers. His setting of In the Bleak Midwinter is still often sung at the service of Nine Lessons and Carols at King’s College, Cambridge, and at similar services around the world. Most of his other compositions that are still performed are settings of the Anglican liturgy, especially his three Communion Services in E, F and A minor, and his settings of the canticles Magnificat and Nunc Dimittis in F.

Later, I met an old friend I have not seen for 35 years. Gerard Linehan now lives in Kingston, outside London, and it must have been 1975 since we last saw one another after a long friendship – our parents were friends too, and he and I both started training as chartered surveyors at the same time in 1970 … although I soon quit for a career in journalism.

From the chapter house at Christ Church we strolled through Temple Bar and across the river to the Italian Quarter for lunch. And then it was back through Temple Bar, and up Grafton Street to Saint Stephen’s Green, sharing stories about other friends and our families and comparing notes about the different directions our lives have taken over the past 35 years. 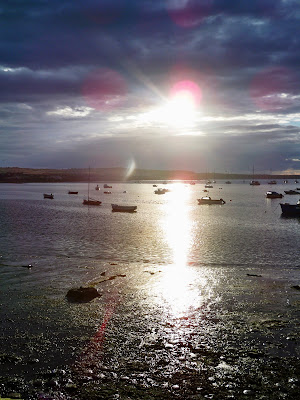 The threatened rain held off; a handful of people were strolling on the strand; and a few people were brave enough to still spend time in the water in kayaks.

By the time I got around to the harbour, the sun was beginning to drop. It was not as dramatic as the setting sun in the Aegean, but it was still beautiful, and it was good to be back walking along the beaches of Fingal once again.