In search of the last two
sitting MPs for Askeaton 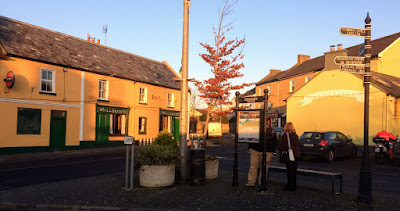 The Square, Askeaton … the town sent two MPs to the Irish House of Commons until the Act of Union (Photograph: Patrick Comerford)

I am now living in the Rectory in Askeaton in west Co Limerick. Today, Askeaton has a population of about 1,200, but it was such an important town in the early 17th century that it was incorporated by charter as a borough in 1613, with the formal of ‘the Sovereign, Free Burgesses, and Community of the Borough of Askeaton.’ This corporation consisted of a sovereign or mayor and 12 free burgesses or town councillors, who, along with other privileges, could hold a court of record every Monday for the trial of all actions personal to the extent of five marks.

The borough became a constituency, and Askeaton continued to return two MPs to the Irish House of Commons from 1614 until the constituency was abolished in 1801.

So for my predecessors in Askeaton, this would have been both their parish and their constituency.

The records for the constituency are not complete for most of the 17th century, and the list of MPs for Askeaton is only full from the late 17th century and the Williamite wars. So I have gone in search of the last two sitting MPs for Askeaton, Sir Joseph Hoare, who was MP from 1761 to 1800, and Sir Vere Hunt, who sat with him from 1798 to 1800.

Sir Joseph Hoare (1707-1801) was descended from a family that had been living in Ireland in the early 17th century. His father, Edward Hoare, had been MP for Cork.

Hoare was born on Christmas Day, 25 December 1707. He was practising as a barrister when he was elected to the Irish House of Commons in 1761 as one of the two MPs for Askeaton. While was sitting as MP for Askeaton, he was given the title of baronet in 1784.

He continued to hold the seat until 1800, when Askeaton was abolished as a ‘rotten borough’ under the terms of the Act of Union and the Irish Parliament was dissolved.

Hoare passionately opposed the Act of Union and he spoke at length against it in the House of Commons despite his age – he was over 90 at the time. He died shortly after the act came into force, on 24 December 1801.

The other sitting MP for Askeaton at the Act of Union was Sir Vere Hunt (1761-1818), also known as Sir Aubrey de Vere Hunt, who sat with Sir Joseph Hoare in the Irish Commons from 1798 to 1800. Hunt was a diarist and a landowner and businessman who founded the village of New Birmingham in Co Tipperary, and who bought Lundy Island in an ill-advised venture.

Hunt was the son of Vere Hunt of Curragh Chase, Co Limerick, and a grandson of the Revd Vere Hunt (died 1759). He claimed descent from the Earls of Oxford through Jane de Vere, a granddaughter of the 15th Earl, who married Henry Hunt in 1572. Vere Hunt, an officer in Oliver Cromwell’s army, and settled in Ireland in 1657. The Hunt or de Vere family owned estate in this part of Co Limerick for 300 years until 1957, and this is now the Curraghchase Forest Park.

In 1784, he married Elinor (Ellen), daughter of William Cecil Pery (1721–1794), 1st Baron Glentworth and Church of Ireland Bishop of Limerick (1784-1794), and a sister of Edward Pery, 1st Earl of Limerick. Sir Aubrey Hunt was given the title of baronet that year when he was appointed High Sheriff of Co Limerick. He raised and commanded three infantry regiments during the French Revolutionary Wars, including the 135th (Limerick) Regiment of Foot.

In 1798, he was elected as the second MP for the constituency of Askeaton, and in 1799 he bought the ‘rotten borough’ of Askeaton for £5,000. But he only held his seat in the Irish House of Commons for two years. Against his political inclinations, he voted for the Act of Union in 1800, apparently hoping to recouping the enormous expenses he had incurred as an MP and which were estimated at £5,000.

There was no universal suffrage at the time, and the electors for the constituency of Askeaton were the Sovereign and the 12 burgesses. But they were in the pocket of the patrons of the borough, the Earl of Carrick and the Hon Hugh Massy.

Henry Thomas Butler (1746-1813) inherited half of the seignory of Askeaton on his marriage to Sarah Taylor. The other half went to her sister, Catherine, who married Hugh Massy (1733-90). Through the marriage of Henry Butler and to Sarah Taylor, several townlands in Askeaton came to be listed as the property of the Earl of Carrick.

When Askeaton lost its status as a separate constituency with the Act of Union, £15,000 was awarded in compensation for the loss of that privilege. But, despite Hunt’s hopes of monetary gain, £6,850 was paid to Henry Thomas Butler, 2nd Earl of Carrick, another £6,850 went to the trustees of the will of Hugh Massy (1733–1790), 2nd Lord Massy, and a former MP for Co Limerick, and only £1,100 went to Sir Vere Hunt and £200 to Sir Joseph Hoare. In addition, Hunt was appointed to the ‘weightmastership’ of Cork, a sinecure that provided him with an income of £600 a year.

Hunt was disappointed, and took an action in court for what he thought was his rightful share of the money. However, his case was thrown out of court, and the judge told him he ought to ashamed for coming to court with such a claim.

Hunt went on to make one disastrous business decision after another. At an auction in March 1802, he bought Lundy Island off the coast of Devon from John Cleveland for £5,270. He believed the owner of Lundy did not have to pay taxes, and he had a plan to establish an Irish colony on the island, with its own constitution, laws, coinage, divorce laws and stamps. But the colony was a failure, and the venture cost him so much money that he spent years pleading with the Crown to take Lundy off his hands.

His entertaining diary shows him as an eccentric who enjoyed life, food, drink, music and the theatre. He managed a touring theatre company, founded a newspaper and took part in duelling, fighting his first duel at the age of 18. He was also a heavy gambler, and his debts were so large that he spent much of 1803 in the Fleet Prison in London.

On the other hand, Hunt was a benevolent landlord who tried to improve the condition of his tenants. He opened a coalmine at Glengoole, Co Tipperary, and founded the village of New Birmingham, near Thurles, to house the miners. He obtained a charter to hold regular markets and fairs in the village.

Although Vere Hunt and his wife Eleanor had one son, Aubrey, their marriage was unhappy and they were living apart when he died on 11 August 1818. 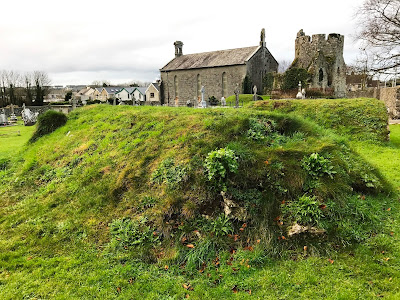 It is said he was buried in Saint Mary’s Churchyard, Askeaton. Although I have been unable to find the precise location of his grave, there are a number of old Hunt family graves in the south-east corner of the churchyard.

Many years after his death, Lundy was eventually sold by his son, also Sir Aubrey Hunt (1788-1846), who succeeded to the title and who changed his name in 1832 to Sir Aubrey de Vere.

Walking by the banks of the River Deel in Askeaton (Photograph: Patrick Comerford)