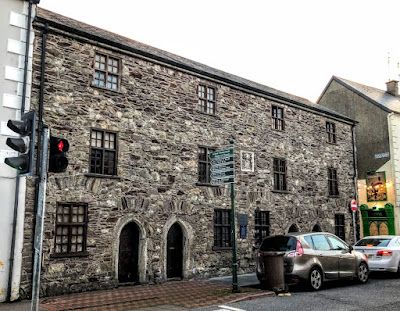 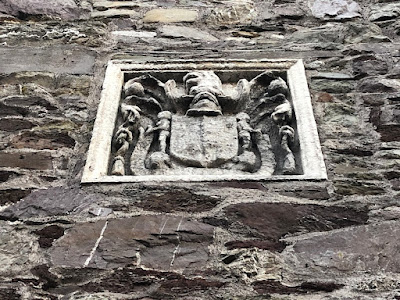 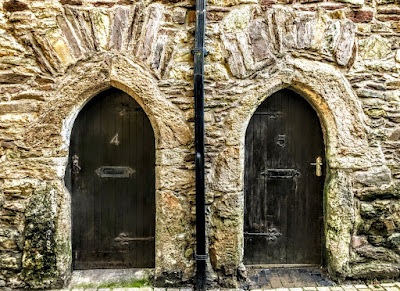 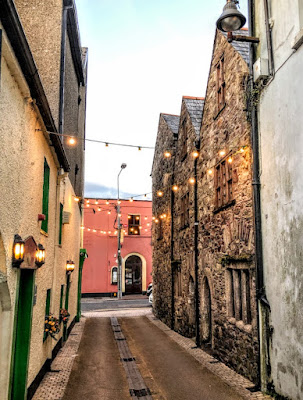 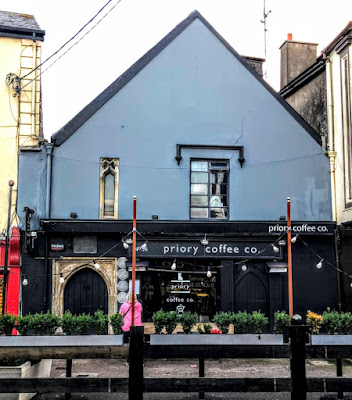 My theme this week is Benedictine (including Cistercian) foundations. My photographs this morning (31 August 2021) are from the former Saint John’s Priory in Youghal, Co Cork. 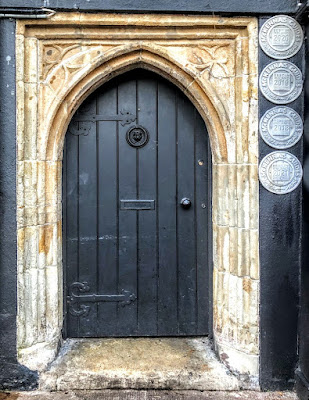 Portions of the early 14th century Benedictine Priory of Saint John can be found at 56 Main Street, in the centre of Youghal. The building is now Priory Coffee Company, an award-winning café in the town centre.

This Benedictine house in the centre of Youghal was founded ca 1350, but the Benedictine presence in Youghal dated back to 1185.

A maison dieu was founded for or by the Benedictines at Youghal in 1185, with an associated leper house on a hill outside the town. A maison dieu was often served as a hospital or hostel providing overnight accommodation for pilgrims.

The Benedictine presence in Youghal was more firmly established inside the walled town by 1306, with the foundation of a structure known as Saint John’s House on Main Street. The house appears to have been a small dependent cell of the Benedictine house at Bath Abbey and operated as a hospital-cell.

Saint John’s Priory was founded in 1350, as a subordinate of the Benedictine Priory of Saint John the Baptist in Waterford (1185) and as a ‘mortuary bequest’. Saint John’s in Waterford was a double monastery that also provided hospital care and it, in turn, was a dependency of Bath Abbey in England.

Saint John’s in Youghal served as a hospital, hostel or almshouse until the Dissolution of the Monasteries at the Tudor Reformation.

Small portions of the building still survive, including the east gable with a moulded pointed arch Gothic doorway that has a carved sandstone surround and trefoil motifs to the spandrels, roll mouldings and a timber battened door with strap hinges. Other interesting architectural details include the two-bay, two-storey, gable front, the rendered chimneystacks, and a carved sandstone lancet opening with open work tracery. The original piscina and aumbrey are said to survive inside.

The passageway leading from the doorway along the southside of the building is a later addition.

It is said Oliver Cromwell made the priory in Youghal his headquarters during the winter of 1649, and that he inspected his troops every morning from the priory.

After a period of neglect, a new gable was inserted in a central position in the structure in the late 18th or early 19th century.

An architectural and archaeological assessment of the building in 2000 identified how the building is laid out in four spaces: the main retail area fronting the street on the east, a kitchen to the west of the shop, a yard beyond, and a long, narrow corridor running along the south wall through the building from east to west, bounded by a poorly built rubble stone wall on the north.

All the spaces are confined within a single rectangular structure. The building was found to have four main phases of construction. The main core is of mediaeval date, and the lower courses of the north and west walls of the mediaeval building were found.

The Magazine was an urban tower house at the front of the property now at 54 North Main Street. It was built within the precinct of Saint John’s Priory, and archaeological studies show uncovered the foundations of an earlier tower and a late mediaeval fireplace.

This building too was supposedly occupied by Cromwell’s army during the winter of 1649-1650.

The Magazine was demolished in 1835 as part of reconstruction works and the realignment of the Main Street.

The former priory has gone through many changes over the years and is now home to the Priory Coffee Company – and, yes, Eggs Benedict are on the menu. 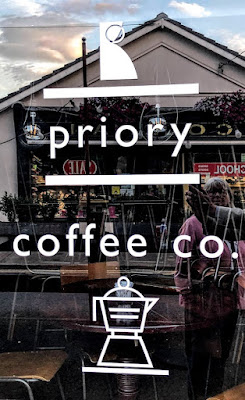 The Priory Coffee Company is an award-winning café in the centre of Youghal (Photograph: Patrick Comerford) 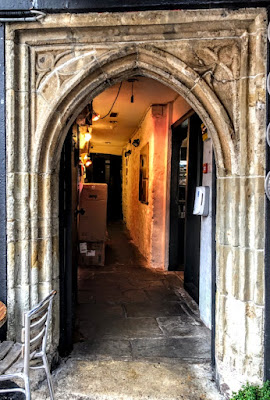 The Gothic doorway opens into a passageway that leads into the rest of the site (Photograph: Patrick Comerford)

The Prayer in the USPG Prayer Diary today (31 August 2021) invites us to pray:

We pray for the Lusophone Network, which represents and connects Portuguese-speaking members of the Anglican Communion. The network comprises 350,000 Portuguese-speaking Anglicans and Episcopalians across countries including Brazil, Portugal, Mozambique and Angola. 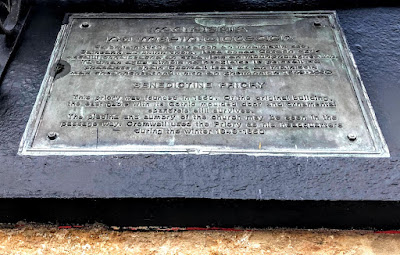 A plque recalls the original use of the building as a Benedictine priory (Photograph: Patrick Comerford) 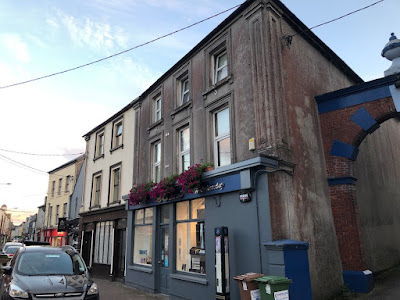 The Magazine at 54 North Main Street was built within the precincts of Saint John’s Priory and was demolished in 1835 (Photograph: Patrick Comerford)