Bridging the challenges of local mission and global mission 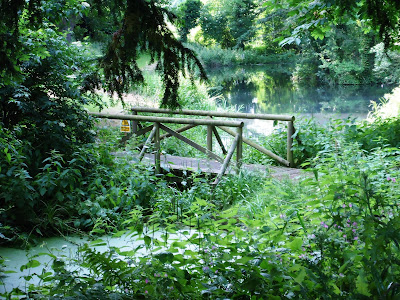 The bridge at the lake in High Leigh ... this morning we talked about bridging the gap between local mission and global mission (Photograph: Patrick Comerford, 2013)

The annual conference of Us – the Anglican mission agency formerly known as USPG (the United Society for the Propagation of the Gospel) – comes to a close today.

We have been meeting for three days at the High Leigh Conference Centre on the edge of Hoddesdon, in rural Hertfordshire.

The conference theme has been ‘Brave Steps’ and at our closing session this morning, we were invited to consider the development of Us programmes focused on churches in Britain and Ireland. Our discussions were facilitated by Janice Price, who is Church Relations Adviser with Us, World Mission Policy Adviser for the Church of England, and the author of World Shaped Mission.

Dr Peter Rookes spoke of world mission being the local experience in the Diocese of Birmingham, with the variety of ethnic and religious backgrounds that make up multicultural Birmingham. His motto for dialogue in a multicultural context is: “Speak with pride and listen with respect.” 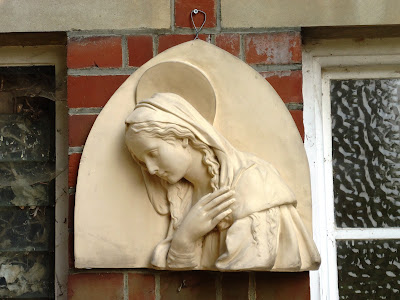 Seen in a corner behind the terrace at the High Leigh Conference Centre in Hoddesdon (Photograph: Patrick Comerford, 2013)

Last night in High Leigh, Canon Richard Bartlett, who is also a member of the board of USPG Ireland, launched this year’s Harvest Pack. This includes worship materials, sermon notes, Bible studies, intercessions and fundraising ideas for churches, community groups and schools.

More resources – including collection envelopes, a short film and a PowerPoint presentation – are available at www.weareUs.org.uk/harvest

The Church of Ireland and USPG Ireland presence at this year’s conference also included Bishop Michael Burrows of Cashel and Ossory, who chairs Us Ireland; Canon Arthur Barrett and Gerard O’Callaghan from Rossory Parish in the Diocese of Clogher; Jan de Bruijn and Linda Chambers de Bruijn; Nola Nixon from Ballymore Parish in Tandragee; and the Revd Lyn Gibson, who with me represents the Church of Ireland on the council of Us. This morning we were also joined by my colleague at the Church of Ireland Theological Institute, David Brown.

Morning Prayer this morning was led by the Revd Canon Rob Jones of Worcester Diocese. The conference comes to a close with the Eucharist celebrated by the Right Revd Dr Jacob Ayeebo, Bishop of Tamale in Ghana. 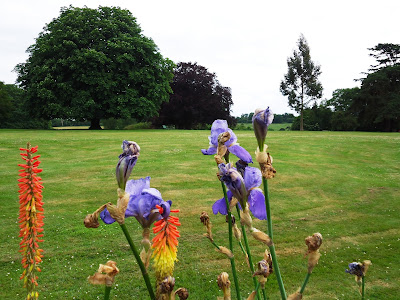 Looking out at the lawns and the countryside at High Leigh (Photograph: Patrick Comerford, 2013)

Posted by Patrick Comerford at 10:46 No comments:

The unusual story of a house with an Irish name 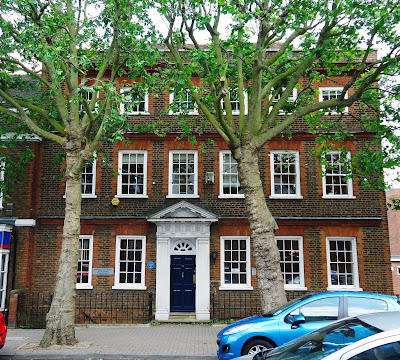 Rathmore House on the High Street in Hoddesdon has links in the past with the church ... but how did it come to have an Irish-sounding name? (Photograph: Patrick Comerford, 2013)

I have been at the High Leigh Conference Centre five times in the past seven years (2006, 2009, 2011, 2012, 2013). Strolling through Hoddesdon again yesterday afternoon, I wondered once again how Rathmore House on the High Street came to have such an Irish-sounding name.

The house is striking visually because of the woodwork at the entrance doorway, which is a good example of the Queen Anne Style, although it is Georgian and dates from 1743. The brickwork around the windows has beautiful pointing, and at the top there is an interesting cornice.

Today, Rathmore House is the offices of a solicitors’ practice. But to many generations in Hoddesdon, this house at 56 The High Street was known as “the Doctor’s House.” I still have to discover how it came to be known as Rathmore House, but I learned earlier recently that one of the many doctors who practiced there and who helped to popularise it being called “the Doctor’s House” lived at High Leigh.

An early tenant in 1467 was Walter Fader, who held the property under Sir John Say. He was buried in Amwell Church, and it was in his grave that William Shakespeare’s friend William Warner was buried in 1608.

The original house was bequeathed by some unknown owner to the Guardians of the Chapel in Hoddesdon, and they held onto it until the old house tumbled down in 1739.

In 1743, the ground was let by the parish to John Borham, who was given a building lease for 99 years at £1 a year. He built this interesting, three-storey house, with its fine Doric doorcase, and his initials are interlaced in the fretwork over the door. John Borham built a fine new house, a three-storey structure in red brick. Above the doorcase, he also engraved the date 1746 in Roman numerals.

By January 1812, the house was owned by Dr James of High Ground – the house now known as High Leigh only acquired that name after it was bought by Robert Barclay from the missionary and banking family, in 1871. Dr James had previously brought smallpox vaccinations to Hoddesdon, and he became the first of a long line of doctors to practice at Rathmore House.

However, a special vestry meeting when it was found that several entries in the vestry book had been erased so that it appeared Rathmore House was held on a 500-year lease and not on a 99-year lease.

The discovery led to a fraught dispute, and Dr James pointed out that he had bought the house in the belief that he held it on a 500-year lease – the 99-year lease was due to run out by 1843.

The dispute between the doctor and the vestry ran on for almost three years, and was only resolved through the mediation of Thomas Nicholson, steward to Lord Salisbury, the local magnate.

When the original lease ran out in 1843, the property was sold to a Mr Stokes. But the house continued to be used by a succession of GPs for their practice. They included Dr William Locke from Penzance, who came from the same family as the philosopher John Locke; Dr William Gosse, who emigrated to Australia; Dr Robert Ingram Stevens; Dr Manning, Dr WH Sturge and Dr L West.

Dr Gosse later emigrated to Australia. One of his children was a land surveyor and became the first European to climb Uluru, which he named Ayres Rock.

Dr Manning was largely instrumental in starting the Hoddesdon Dispensary for the benefit of the poorer people of the town, and the surgery continued until the advent of the National Health Service.

Rathmore House remained the “Doctor’s House” in Hoddesdon until the mid-20th century, when it was superseded by purpose-built surgeries. It now houses the solicitor’s practice, Duffield Harrison, and the house retains its Georgian elegance. However, I still have to find out why it was given a name with such Irish resonances.