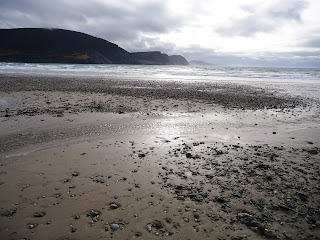 Standing on the beach in Keel at noonday today (Photograph: Patrick Comerford, 2013)

Normally, a walk on the beach is a good exercise for body, soul and intellect at the weekend. Two weeks on the beach brings on an added bonus. But this weekend I managed to visit six beaches – five on Achill Island, and a sixth at Mulranny on the way back to Dublin.

In all, it was more than a 680 km round trip from the Braemor Park in Dublin to Achill Island, off the west coast of Co Mayo, and back again, getting back to Dublin late this evening [Saturday, 16 February 2013]. 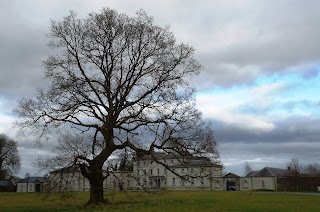 Four of us left Dublin just after noon on Friday and headed west to visit Achill Island. After a brief stop to take some photographs in Edgeworthstown for future research, our first real half-way stop was for a late lunch in Co Roscommon at Strokestown Park House, the 18th century Palladian home of the Pakenham Mahon family until 1981, and now the home of the Famine Museum.

The house was built by Thomas Mahon MP (1701-1782) on lands granted to his grandfather, Nicholas Mahon, in the late 17th century. 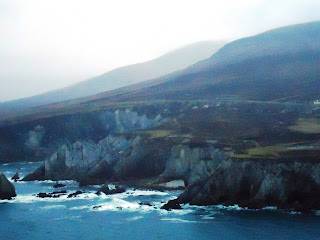 The spectacular cliff view on the Atlantic Drive on the south coast of Achill Island on Friday evening (Photograph: Patrick Comerford, 2013)

By the time we got to Castlebar, the rain was beginning to come down, and the road out through Burrishoole and Newport was shrouded in mist. By the time we got to Mulranny, it was difficult to see down onto the long stretches of beach or out to Clew Bay, and we decided to continue on the road.

But darkness had not yet fallen by the time we reached Achill Island, and after crossing the Sound we took a detour south along the Atlantic Drive, through Kildavnit, passing the ruined castle associated in legend with Grace O’Malley the pirate queen, by the small quay at Cloghmore, up above the cliffs at Ashleam, and on to Dooega.

We joined the main road to Keel again at Cashel, and, as we passed by the signs to Dugort and the Strand Hotel, I realised that it is a full year since I was last in Achill, when we returned for Martin Walsh’s funeral.

There was a time when Achill was a much-favoured retreat when I wanted to get away and needed a quiet place and write, and found it in the Strand Hotel in Dugort.

I suppose I am a little surprised that as Achill has become more accessible with easier roads from Dublin, I have been here less and less frquently. As we drove across the island, I realised how deserted in winter Achill is.

At Keel, as darkness closed in, we called in to seeTom and Una McNamara. The McNamara family once ran the Boley House, which was the finest restaurant in Achill in its heyday in the 1980s and 1990s.

After dinner in the Achill Cliff House Hotel in Keel, we drove back to Dugort hoping to find a little music and some Friday night life. The Strand Hotel was in complete darkness, but we stll had a short stroll on the beach below and listened to the gentle waves beneath the night skies.

Eventually, we ended up in the Valley House, where a violent incident in the late 19th century inspired John Millington Synge’s play, The Playboy of the Western World.

Looking back on Keel from Lake Corrymore (Photograph: Patrick Comerford, 2013)

Through the night we could hear the Atlantic wind howling across the island, and the waves crashing against the rocks and the pebbles on the shore at Keel.

By morning, much of the mist had lifted, and it was dry. Despite the chill in the wind, it was good weather to see more of Achill Island, and we drove up past Captain Boycott’s House up to Corrymore Lake for a view back across much of the island.


785Standing on the beach at Keem Bay this morning (Photograph: Patrick Comerford, 2013)

From Corrymore, we took the steep road down to Keem Bay, where the beach was deserted, but the water was sparkling and there were clear views across the seas, with streaks of silver light in the skies and on the sea. 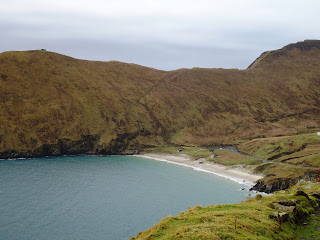 Looking back at Keem Bay this morning (Photograph: Patrick Comerford, 2013)

As we climbed back up the road from Keem, we wondered what we were looking at in the water below ... basking sharks? a pair of dolphins? or just rocks?

We stopped in Keel again to have a look at the beach in the daylight. We lingered a little before turning north again, to visit the Deserted Village below Slievemore and to hear again the stories of “booleying” and the impact of the famine in the 1840s.

Further east, still on the slopes of Slievemore, we drove up by Grey’s and the former Slievemore Hotel in the former mission colony built in the mid-19th century by the Revd Edward Nangle.

We were delighted to find the door into Saint Thomas’s Church was was open, thechurch had been reroofed, and a new organ has been installed. 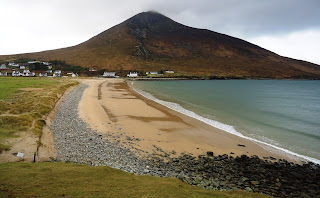 Looking down onto the beach at Dugort towards the Strand Hotel (Photograph: Patrick Comerford, 2013)

We had another look at the beach at Dugort, below the Strand Hotel, and recalled the many many years I stayed in the Strand Hotel time-on-end and went to church in Saint Thomas’s. There were happy memories of many people who had ministered and worshipped in this church over the decades – some of them buried in the churchyard.

A clever sign at the Golden Strand (Photograph: Patrick Comerford, 2013)

We stopped again at the Golden Strand at Masterson’s. A sign for the restaurnant once said: “Slow Down. Good Food Ahead.” But a clever dollop of what paint had been applied recently, making a witty thrological point worthy of the Vicar of Dibley.

Here we enjoyed yet another lengthy beach, and once again miles and miles of golden sand stretched before us and the golden grass allowed us to imagine that Spring might soon arrive.

The road east through Dooniver brought us to Bull’s Mouth, where we stood at the small jetty where two currachs were tied up and another two or three were upended. We stood in wonder for a while beside this tiny beach as we gazed across the narrow water and its deceptively strong currents and cdounter currents to the tiny island of Inisbiggle that lies between Achill and the mainland coast of Co Mayo.

We stopped once again at Achill Sound to buy the morning newspapers, but all four of us decided against visiting the so-called “House of Prayer.”

Standing on the edge of the causeway at Mulranny that leads out into Clew Bay (Photograph: Patrick Comerford, 2013)

We stopped at the Mulranny Park Hotel for lunch, and then eventually made that good on that long-standing promise to visit the beach below, with its panoramic views out to Clew Bay.

The steep steps below the hotel lead down to a causeway that seems to stretch out infinetly to Clew Bay. We could have lingered longer. I must return in summer to enjoy the visit in the evening sun.

There was one more stop along the way – to visit Saint Nathy’s Cathedral in Balaghdereen. It had been dark for many hours by the time we got back to Dublin tonight.

Posted by Patrick Comerford at 23:32 No comments:

With the Saints in Lent (4): Saint Onesimus, 16 February 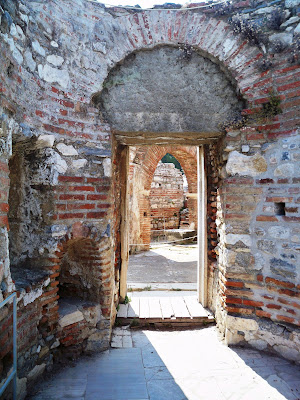 Remains of the basilica in Ephesus ... Onesimus is said to have been Bishop of Ephesus before he was martyred (Photograph: Patrick Comerford)

Many Church Calendars have traditionally commemorated the freed slave Onesimus as a saint on 16 February. Saint Onesimus (Ὀνήσιμος, Onēsimos, “useful”) is also called Onesimus of Byzantium and the Holy Apostle Onesimus in some Eastern Orthodox Churches.

Onesimus was a slave of Philemon of Colossae, a man of Christian faith, and is sometimes identified with Onesimus who is named by Ignatius of Antioch as Bishop in Ephesus.

The name Onesimus appears in two New Testament epistles, in the Letter to Philemon and in the Epistle to the Colossians.

The Epistle to Philemon was written by the Apostle Paul to the slave-master Philemon about a runaway slave, Onesimus. He was a Phrygian by birth, the slave to Philemon, a person of note of the city of Colossæ, and was converted to Christianity by Saint Paul. Trying to escape punishment for a theft he was said to have committed, this slave found his way to the place where Saint Paul was in prison – in Rome, Ephesus or Caesarea.

After hearing the Gospel from Saint Paul, Onesimus converted to Christianity. Saint Paul, who had earlier converted, tried to reconcile the two by writing the letter to Philemon. In this letter, Paul recommends Philemon to set Onesimus at liberty, and sent back to his spiritual father.

Saint Paul asks Philemon to accept Onesimus “no longer as a slave, but more than a slave, a beloved brother – especially to me, but now much more so to you, both in the flesh and in the Lord. So if you consider me your partner, welcome him as you would welcome me. If he has wronged you in any way or owes you anything, charge it to my account.” (Philemon 16-18).

In Colossians 4: 9, we come across a man named Onesimus who accompanies Tychicus on his visit to the Christians in Colossae, but nothing more is said about him there.

It may be that this Onesimus is the same Onesimus who became a bishop in Ephesus after Saint Timothy, who had been succeeded first by Saint John and then by Caius.

During the reign of Emperor Domitian and the persecution of Trajan, Onesimus was imprisoned in Rome and may have been martyred by stoning, although other traditions say he was beheaded. Saint Jerome and other Fathers say he was a preacher of the Gospel and a bishop who was martyred under Domitian in the year 95.

The traditional Western commemoration of Saint Onesimus is on 16 February, but the Eastern Churches remember him on 15 February and 22 November.

O Almighty God, you have knit together your elect into one communion and fellowship in the mystical body of your Son, Jesus Christ, our Lord. Grant us grace so to follow your blessed saints, including Saint Onesimus, in all virtuous and godly living, that we may come to the unspeakable joys which you have prepared for those who unfeignedly love you; through the same Jesus Christ, your Son, our Lord, who lives and reigns with You and the Holy Spirit, one God, now and forever.

Canon Patrick Comerford is Lecturer in Anglicanism and Liturgy, the Church of Ireland Theological Institute, and an Adjunct Assistant Professor at the University of Dublin (Trinity College Dublin).