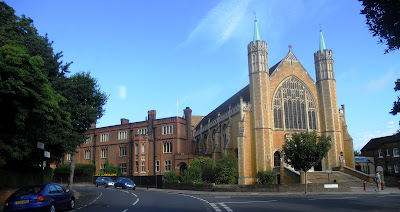 I am in London for the next two weeks, staying in Saint Benedict’s Abbey, Ealing, and studying at the Benedictine Study and Arts Centre and the Institutum Liturgicum in Anglia et Cambria, or the Liturgy Institute in England and Wales, which is based at Ealing Abbey and also at Farnborough Abbey in Hampshire.

The Benedictine Study and Arts Centre opened in 1992 with the support of Ealing Abbey and the Archdiocese of Westminster. The programmes include Sacred Liturgy, Liberal Arts, adult education and a Latin summer school.

The liturgy institute was founded in 2009 by Abbot Martin Shipperlee of Ealing, Abbot Cuthbert Brogan of Farnborough, Dom James Leachman OSB, and Dom Daniel McCarthy OSB. It draws on and is committed to the intellectual and cultural heritage of Christianity, and is dedicated to promoting research, scholarly publication and teaching liturgy.

The institute complements the work at the Liturgy and Worship programme in Sarum College, the work at the Mirfield Liturgical Institute, and the Liturgy Newsletter produced by the Liturgy Office of the Roman Catholic bishops of England and Wales, through its research, publishing, organising courses, dialogue, and co-operating with universities and other academic institutions.

The library here is based on a collection assembled in Oxford, London and Rome from 1978 to 1992, and supplemented by gifts, including recent donations from several members of the Alcuin Club.

Ealing Abbey is just half an hour from Heathrow Airport. I arrived this evening in time to join the monks for Vespers in the Abbey Church.

At supper in the refectory I met some of the other students who also arrived today and two of the lecturers on the course I am taking part in during the next two weeks. The centre’s principal, Dom James Leachman, has also been the Professor of Liturgy at the Pontifical Institute of Liturgy at Sant’ Anselmo in Rome since 2002. He continues to direct the work of the centre, which also publishes the periodical Benedictine Culture twice a year. Dom Daniel McCarthy is a monk of Saint Benedict’s Abbey in Atchison, Kansas.

After supper, we moved to the Calefactory for coffee. The calefactory is reserved for the use of the monastic community, and we finished the evening there with the office of Compline at 8.

The course begins in the morning. I look forward to what awaits me.

Gracious and Holy Father,
Give us wisdom to perceive you,
Intelligence to understand you,
Diligence to seek you,
Patience to wait for you,
Vision to behold you,
A heart to meditate on you,
A life to proclaim you,
Through the power of the Holy Spirit of Jesus Christ, Our Lord.
Amen.