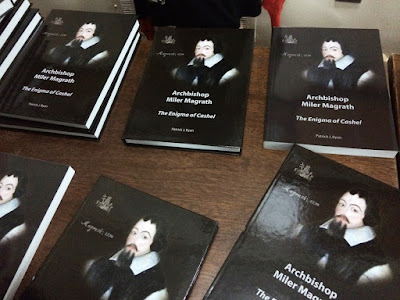 The invitation came from Father Marc Whelan, CSSp, the Spiritan Provincial in Ireland, and Peter O’Mahony, Communications Manager for the Spiritans.

The speakers included Dr William Nolan, Professor Emeritus of Geography, UCD, the Chief of the Magrath Clan, Sean Alexander McGrath, and the author himself. There were greetings from the Revd Terri Woolgar in Canada, who can trace her ancestry back to Magrath in an unbroken line of 12 generations. I was honoured to be singled out by Marc Whelan in his welcomes, along with Bishop Eamon Walsh.

Paddy Ryan taught me Church History in the Kimmage Mission Institute at Kimmage Manor 30 years ago, when I quickly became aware of his deep and unchallengeable knowledge of the enigmatic Elizabethan Archbishop Miler of Cashel, which dated back to Paddy’s days as a schoolboy in Cashel, Co Tipperary.

Appropriately, Tuesday’s launch took place in another Spiritan venue, Saint Mary’s College, Rathmines, across from the landmark copper dome of the local Catholic parish church, lit up and resplendently green under an almost-full moon. 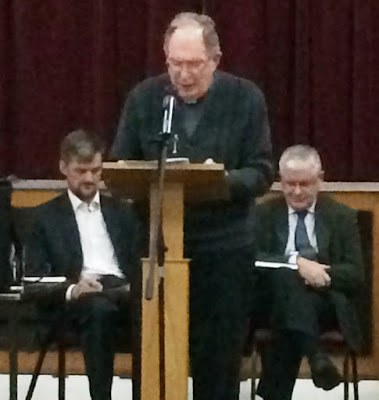 Miler Magrath died at the age of 100 in 1622, when to have lived to being a centenarian was an achievement in itself. But the author’s attention is drawn not so much to the archbishop’s unusual longevity but to his unusual ecclesiastical, political and social achievements.

Magrath was born near Pettigo in 1522 into a family of Gaelic chieftains who owned Lough Derg, a centre of pilgrimage in Co Donegal already a place of pilgrimage. He joined the Franciscans and was received part of his theological educated in Rome at the same time as the Council of Trent. After travelling on Continental Europe, he returned to Ireland in 1565, when he was appointed Bishop of Down and Connor by Pope Pius IV.

Back in Ireland, however, he took the Oath of Allegiance to Queen Elizabeth, although he did not take the Oath of Supremacy until he was arrested in London on his way back to Rome. In return, he was appointed the Church of Ireland Bishop of Clogher in 1570, although in the eyes of Rome he remained Bishop of Down and Connor for the next 10 years.

In an ‘Irishman’s Diary’ in The Irish Times earlier this year [21 August 2014], Joe Carroll, who was at the launch too, quoted me as describing him as “the infamous Miler Magrath, one of the most corrupt pluralists in Irish Church history.” Pope Gregory XIII, tiring of this double role, finally excommunicated him in 1580.

In his late 80s, he was still seeking new episcopal appointments in Derry and Raphoe or failing that, “some competent pension.”

The former Franciscan friar married Amy O’Meara from a Roman Catholic family from Toomevara, near Nenagh, Co Tipperary, and they were the parents of nine children. Anny remained a practising Roman Catholic all her life. Once when her husband asked why she refused to eat meat on Friday, she replied: “Because I do not wish to commit sin with you.”

“Surely,” he retorted, “you have committed a far greater sin in coming to bed with me, a friar?”

Magrath enriched himself from his dioceses and used the property he acquired for the benefit of his large family. Willie Nolan suggested he was a property magnate who today “would be the envy of Nama.” Although these nine children were educated as Roman Catholics, they still secured lucrative incomes through his church holdings.

As well as being a lord spiritual, Magrath was a lord temporal, deeply involved in Anglo-Irish politics as he worked closely with the senior government figures in Dublin and London to suppress the Desmond rebellion in Munster and to counter Hugh O’Neill’s rebellion which ended at the Battle of Kinsale.

This handsome and generously illustrated, scholarly, new book is ¬an exhaustive study of Magrath and his career, drawing extensively on archival and contemporary sources.

Magrath has been “reviled, demonised and scapegoated” and was dismissed as being “irascible, wild and unstable,” but was also praised as a diplomat, a politician, and a “man of gravity and learning.”

Paddy asks the inevitable question of whether Magrath returned to Rome in his final days. The Pope legitimised his children in 1619, but whether there was a deathbed conversion is not clear. He died in 1622 at the age of 100.

The Latin epitaph on his tomb in Saint Patrick’s Cathedral on the Rock of Cashel reads:

The ode of Miler Magrath, Archbishop of Cashel, to the passerby.
Long ago the most holy Patrick,
the great glory of our country, came to Down.
I his successor in Down wish I were as holy as he.
So at first I was Bishop of Down.
For fifty years, England, I served your government,
and pleased your rulers in times of noisy wars.
Here where I am placed I am not. I am not where I am not.
Nor am I in both places, but I am in each.
It is the Lord who judges me. I Cor. 4. – 1621.
Let him who stands take heed lest he fall

Paddy wonders whether Miler is saying he was in neither the Roman Catholic Church nor the Church of Ireland, but had a foot in both.

Magrath was once described as “the handsomest man in Ireland in his day.” But his only known portrait is in the Clogher episcopal gallery and it provides the cover illustration for this new book. 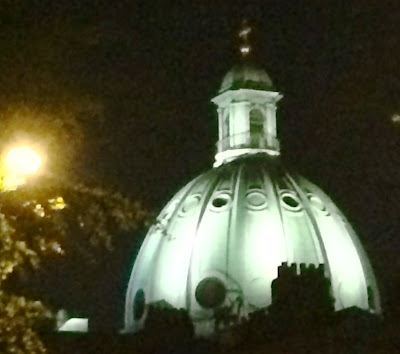 The church dome in Rathmines under the moonlight on Tuesday night (Photograph: Patrick Comerford, 2014)