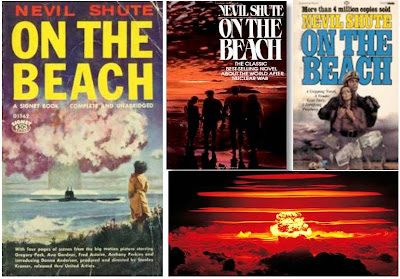 In this last of meeting places
We grope together
And avoid speech
Gathered on this beach of the tumid river...

Nevil Shute, who spent much of his childhood in Dublin, used this quote from TS Eliot’s ‘The Hollow Men’ on the title page of On the Beach (1957), his best-selling novel about life and death in Australia after a nuclear war has destroyed all life in the northern hemisphere.

The story tells of how a global, devastating nuclear war can start accidentally, and by mistaken signals being misinterpreted.

At the time Nevil Shute wrote On the Beach, the Cold War was at its height. The New York Times called it “the most haunting evocation we have of a world dying of radiation after an atomic war.”

A reviewer in the San Francisco Chronicle called it “the most shocking fiction I have read in years. What is shocking about it is both the idea and the sheer imaginative brilliance with which Mr Shute brings it off.”

The Times of London said this vintage classic is “the most evocative novel on the aftermath of a nuclear war.”

The Guardian praised it for playing an important role in raising awareness about the threat of nuclear war. “We stared into the abyss and then stepped back from the brink.”

The reviewer in the Los Angeles Times, who found it “timely and ironic,” was left “tearful and disturbed.”

More recently, The Economist has returned to On the Beach and said it is “still incredibly moving after nearly half a century.”

A few weeks after the film version of On the Beach was released, starring Gregory Peck, and the day before he died, Nevil Shute wrote: “A popular novelist can often play the part of the enfant terrible in raising for the first time subjects which ought to be discussed in public and which no statesman cares to approach.”

The Cold War is over, and it is half a century this year since the 1963 setting of Nevil Shute’s chilling, post-apocalyptic, end-of-the-world novel.

And today, the threat of nuclear war is more real and more terrible than it was half a century ago.

We do not know the exact number of nuclear weapons in global arsenals – each of the nine countries with nuclear weapons guards these numbers as closely held national secrets. We know, however, half a century after the setting of that novel and more than a decade and a half after the Cold War came to an end, that the world’s combined stockpile of nuclear warheads remains at unacceptably high levels.

But it is probable that there are 17,000 nuclear weapons in the world today. Of those, 2,000 linger at hair-trigger alert, ready to be launched within minutes. The detonation of just one would cause a humanitarian catastrophe on a horrific scale, greater than that imagined by Nevil Shute.

The evidence is clear that nuclear weapons have catastrophic humanitarian consequences and that no adequate humanitarian relief is possible.

Today, it is not novelists like Nevil Shute who are playing the role of “the enfant terrible in raising for the first time subjects which ought to be discussed in public and which no statesman cares to approach.”

Instead, this role is being played today by whistle-blowers like Bradley Manning and Edward Snowden.

As the President of the Irish Campaign for Nuclear Disarmament, I am very pleased to announce that the International Peace Bureau in Geneva, to which Irish CND is affiliated, is to award this year’s Sean MacBride Peace Prize – named after a previous President of Irish CND – to Bradley Manning for his courageous actions in revealing information about US war crimes.

We have a lot to thank Bradley Manning for today. The US army, in defiance of all principles of justice, has acted as the prosecutor, the judge, and the jailer for this unlikely hero who leaked more than 250,000 US diplomatic cables, 400,000 US army reports about Iraq and another 90,000 about Afghanistan, as well as the material used in the Collateral Murder video from WikiLeaks: videos of the 2007 Baghdad airstrike and the 2009 Garani airstrike in Afghanistan.

A leaked video clip from 2007 shows a US helicopter crew gloating as they launch an air-strike that killed a dozen people in Baghdad – just as they might have if they were playing a video game.

Leaked dossiers about detainees at Guantanamo Bay reveal that some prisoners continue to be held without trial even though they have been cleared for release.

These dossiers threw further light on what has been a disgraceful episode in modern military history.

Bradley Manning has also revealed the whereabouts of US tactical nuclear weapons, as well as the location of key US military facilities.

It is one of the highest moral duties of the citizen of any state to make known war crimes and crimes against humanity. This is within the broad meaning of the Nuremberg Principles set out at the end of World War II.

When Bradley Manning revealed to the world the crimes being committed by the US military, he was engaging in an act of obedience to this high moral duty. Already, he has been nominated for the Nobel Peace Prize.

War operations, and especially illegal ones, are frequently conducted under the cover of secrecy. To penetrate this wall of secrecy by revealing information that should be accessible to all is an important contribution to the struggle against war.

Bradley Manning’s whistle-blowing challenges the military system that dominates and terrorises our global economy and society today. Whistle-blowers are vital in upholding democracies – especially in the area of military and security policy and decision-making.

The heavy sentence Bradley Manning now faces is not only unjust but also has a very negative effect on the right to freedom of expression that the US claims to uphold.

Edward Snowden too has revealed many of the secrets of the military world, including US discussions with Israel and Saudi Arabia – hardly paragons of democracy – to attack nuclear facilities in Iran, even at the risk of starting a conflict in which nuclear weapons come to be used.

If Edward Snowden or Bradley Manning had been Chinese or Russian dissidents, the US would have had no problem about speaking out immediately about their heroism, praising their action and offering them asylum.

It is to the shame of Ireland, that neither of these modern-day heroes, holders of the banner of morality in the immoral nuclear age, has not been offered asylum in this country.

We ought to be grateful to Bradley Manning and Edward Snowden, each for taking the risk that comes with playing the role of “the enfant terrible” and “raising … subjects which ought to be discussed in public and which no statesman cares to approach.”

When he first read On the Beach, Thomas Finletter, a former Secretary of the US Air Force, responded: “I hope it is fiction.” Finletter, who later served as John F Kennedy’s Ambassador to NATO, was startled, and then asked: “Are you sure it is?”

As long as the nuclear stockpiles remain in the arsenals of the nine nuclear powers, Shute’s fiction threatens to become reality. And then it will be too late for, to turn around that citation from TS Eliot’s ‘The Hollow Men’ at the beginning of On the Beach, the world may end, not with a whimper, but with a bang.

In this last of meeting places
We grope together
And avoid speech
Gathered on this beach of the tumid river...