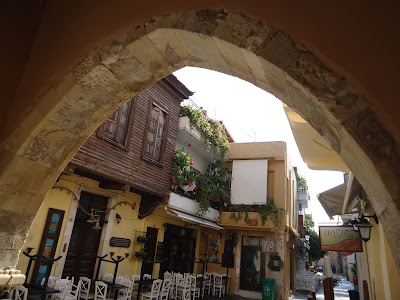 Looking out onto Vernadou Street from the arcade of the and Folk Art Museum of Rethymnon (Photograph: Patrick Comerford, 2013)

Rethymnon’s best known literary figure is the writer Pandelis Prevelakis (1909-1986), although in western evaluations of Cretan literature he is often overshadowed by his friend and contemporary Nikos Kazantzakis.

Pandelis Prevelakis (Παντελής Πρεβελάκης) was one of the leading Greek prose writers of the “1930s generation.” Like Kazantzakis, he also wrote a biography of the great Cretan-born painter, El Greco. But he is best remembered in his home town for his account of daily life in Rethymnon, The Tale of a Town. His other works include Desolate Crete (1945), an account of the 1866 insurrection; The Death of the Medici (1939), an historical novel; The Sun of Death (1959); and a large trilogy, The Cretan (1948-1950, 1965), set in the half century before Crete’s independence from Ottoman rule, introducing characters such as the Greek Prime Minister Eleftherios Venizelos, who was born in Chania. He also wrote four historical plays.

The Tale of a Town (Το χρονικό μιας Pολιτείας, 1938), which is now impossible to find in an English-language translation in the bookshops of Rethymnon, chronicles unfamiliar and now often-lost aspects of daily life in Crete, with its nostalgic description of Rethymnon from 1898 to 1924.

When Prevelakis died in Athens in 1986, he was buried in a churchyard near the top of the hill on Kazantzakis Street in Rethymnon.

This morning I visited the Historical and Folk Art Museum in Vernadou Street in the centre of the old town. This is another way of telling “the tale of a town,” and the labeling on many of the exhibits is amplified with quotations from Prevelakis describing many of the skills and crafts of the town:

“… And so, when I speak only of the arts and tools of the men of other days, it seems to me that I am turning back in time, penetrating into their lives and entering into their souls by a way no warlike history could lead me … I would like Rethymnos to live on here, to live on through this part of me, who am a shoot of its stock.”

The museum is housed in an old, restored Venetian palazzo, on one side of the old courtyard, with its bitter orange trees. 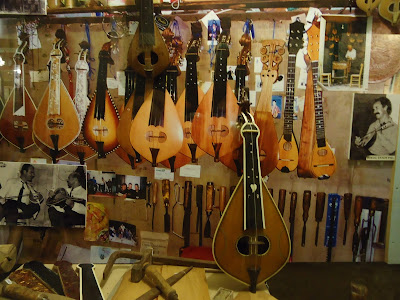 The work of a traditional lyra-maker on display in the museum (Photograph: Patrick Comerford, 2013)

There are displays demonstrating traditional crafts and trades such as saddlers, coppersmiths, blacksmiths, cobblers and lyra-makers, and a reconstuction of an early 20th century taverna and coffee shop.. A noticeable absence is an account of the tradition of icon-writings. 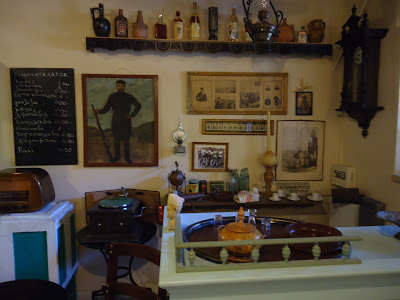 A reconstructed traditional taverna in the museum (Photograph: Patrick Comerford, 2013)

Upstairs there are exhibits of woven textiles, embroideries, lace, costumes, ceramics, baskets, and reconstructions illustrating a 19th century middle class living room and traditional bread-making. Once again, the noticeable absence is an account of ordinary, every-day life of the Venetian or Ottoman residents from the past.

The museum is a private institution, founded in 1973 by Mrs Faly Voyatzakis and the late Christophoros Stavroulakis, and officially inaugurated in 1998. 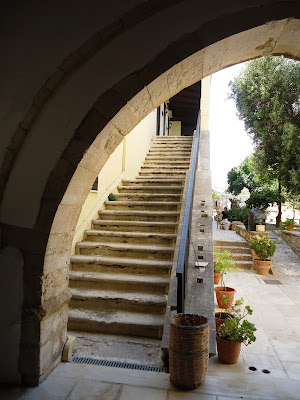 The carved stone staircase in the courtyard of the museum (Photograph: Patrick Comerford, 2013)

If there is room for improvement, then perhaps the museum could offer workshops for children on crafts that are in danger of being forgotten, the courtyard would make a wonderful traditional café and taverna, which might draw in more discerning tourists, and there is surely room for a stall selling postcards and books on the history of Rethymnon – perhaps even English-language versions of The Tale of a Town by Pandelis Pervelakis.

Olive groves in the mountains above Rethymnon (Photograph: Patrick Comerford, 2013)


It is a tree, self-born, self grown, unaided my men’s hands,
a tree of terror to our enemies and their spears,
a tree that grows best upon this very land!
It is the gray-leaved olive tree, a tree that nurtures our youth,
a tree that no youth nor aged citizen can damage or destroy
because it’s cared for and protected
by ever-watching eyes of Zeus Morios
and Athena of the gray eyes.
– Sophocles

This year’s olive picking season has started in Crete, where olive trees and olive oil are almost the lifeblood of the island.

The climate and the soil of Crete are ideal for cultivating olives, and the area around Rethymnon in particular, which has an abundance of olive groves, has been associated olive growing for centuries.

The olive grove near Adele, on the way up to the Monastery of Arkadi, stretches across a vast, flat expanse of open land in a semi-mountainous area to the south-east of Rethymnon, and it is said to be one of the largest olive groves in the Mediterranean.

Olive growing has been an essential part of life in Crete for over 3,000 years. Linear B inscriptions and archaeological finds in Knossos show that olives were cultivated and olive oil production was important in the economy of the Minoan civilisation.

Much later, in the fifth century BC, Sophocles wrote a hymn to the olive tree for his last play, Oedipus at Colonos (401 BC). 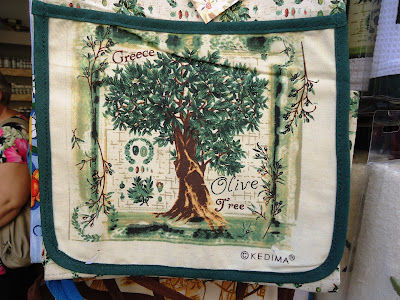 The olive tree is an essential part of life in Crete (Photograph: Patrick Comerford, 2013)

Today, it is said, Crete has more than over 1.5 million olive trees. The main types of olives cultivated here are chondrolies, with some koroneikes, and a few tsounates. They produce excellent olives for the table, but most olives harvested in Crete this season will be used in the production of olive oil too.

The harvesting season lasts for six months. Green olives are being harvested now and through to next month [September-October]; black olives, which are riper, will be harvested from November to January; and olives for extracting oil are gathered from December to February.

Despite the size and extent of the olive grove near Adele, olive groves are generally quite small and need to be tended regularly. It takes three or four years for an olive tree to start producing fruit, and a tree reaches its most fruitful age sometime between 15 and 30 years. 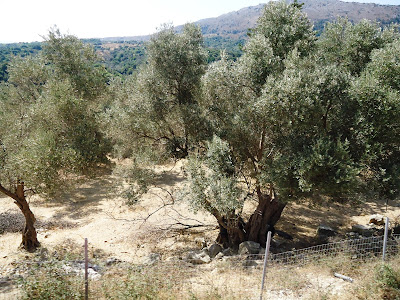 Olive trees are a long-term investment. The olive tree is known for its long life and can continue producing fruit until it is old as 150. It said some trees in the Adele area date back to the 18th century. The average production of an olive tree is around 26 lb of olives every two years, which can produce up to two litres of oil.

But the older trees have enormous roots wrinkled bark, yet continue to produce crops of up to 70 lb. Sometimes in the groves you can see young trees planted in among the older trees.

To make harvesting easier, trees are often cut short. A ladder is used in many groves to beat the olives down, or the fruit can be shaken down from the trees, with nets and canvas spread beneath the trees to catch the ripe olives as they fall to the ground below.

Young trees can be planted in geometrical formation, but the spaces between the trees are put to good use. The olive groves can also be home to vines, and in some places the space between the trees is used as pasture after the last black olive has been harvested in January or February.

The Olive tree is the “the tree that feeds the children,” according to Sophocles. In Crete, olive groves are often a family business, with 100,000 families producing 10,000 tons of olive oil a year. Olive groves are passed down through the generations, and sometimes a grove can be given by an olive farmer as a dowry for his daughter.

Olives and olive oil account for one of the main sources of income throughout Crete, so that olive oil is often called “Crete’s liquid gold.” The average annual consumption of olive oil in Crete is put at 25 liters per person. 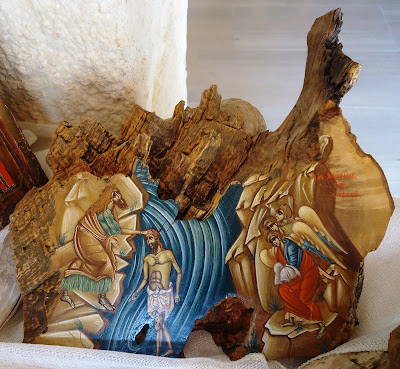 An icon of the Baptism of Christ, worked on a cut of olive wood by Eleftheria Syrianoglou (Photograph: Patrick Comerford, 2013)

Olives and olive trees are used for everything, from wood products including kitchen utensils, to fuel and building materials to plain and simple but aromatic soap.

At the icon exhibition in the Fortezza in Rethymnon at the weekend, there was a collection of small table icons, worked on odd-cuts of olive wood by Eleftheria Syrianoglou.

In the past year, there has been a growth in the number of shops in Retymnon selling olive products, along with everything imaginable to do with olives, including kitchen utensils made with olive wood, mugs , and tea towels, oven gloves and mugs hailing the benefits of the olive. 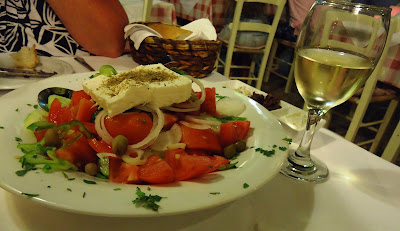 Olives are an essential part of every Greek salad (Photograph: Patrick Comerford, 2013)

But first and foremost, olives are an essential part of the Mediterranean diet, and they feature in every meal and at every table. Even when Greeks have breakfast, olives and bread with olive oil are often part of the fare.

Everyone knows that olives are an essential component of every Greek salad. But one of my favourite snacks in Crete is the simple Cretan dakos made from slightly soaked barley rusks (paximadi), chopped or sliced tomatoes, feta, olives, a little garlic, and a sprinkling of oregano according to taste – all dressed with olive oil. 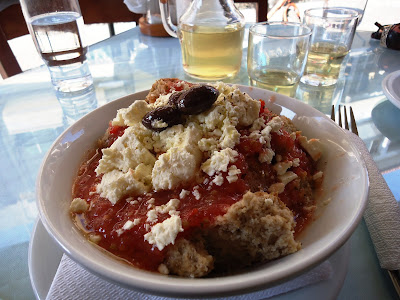