Presiding at the Cathedral Eucharist
on the First Sunday of Advent 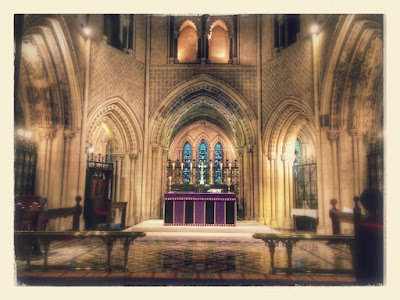 Advent begins today [27 November 2016], and this morning, on the First Sunday of Advent, I am presiding at the Cathedral Eucharist at 11 a.m. in Christ Church Cathedral, Dublin.

The preacher this morning is the Dean of Christ Church, the Very Revd Dermot Dunne, and the setting is the Mass for Four Voices, by William Byrd (1540–1623), is being sung by the Cathedral Choir.

At the Gathering of God’s People, the choir is singing a section of the Advent Prose in procession:

The Post-Gospel Hymn is one of the best-known Advent carols, O come, O come, Emmanuel!, and we are signing this hymn again tomorrow morning in the chapel of the Church of Ireland Theological Institute at the beginning and at the end of my reflections on ‘Finding a Spirituality for Advent.’

The first English translation of Veni, veni, Emmanuel was made by John Henry Newman in 1836. Some years later, the Revd John Mason Neale (1818-1866), a Victorian authority on mediaeval liturgy and hymnody, published the five Latin metrical stanzas in his Hymni Ecclesiae in 1851. Neale’s English translation was published that year in his Mediaeval Hymns and Sequences, with the opening line: ‘Draw Nigh, Draw Nigh, Emmanuel.’

A slightly revised version was also published in 1854 by Neale and the Revd Thomas Helmore (1811-1890), a one-time curate in Saint Michael’s, Lichfield, and a priest-vicar in Lichfield Cathedral, who helped revive an Anglican interest in plainsong or Gregorian chant, in The Hymnal Noted.

Seven years later, in 1861, it was published in Hymns Ancient and Modern, but with the more familiar opening words: ‘O Come, O Come Emmanuel’ – and with the note: ‘Altered by the Compilers.’

The Advent Procession in the cathedral later this afternoon, at 5 p.m., includes Advent readings and hymns.

The Dean’s welcome in the booklet for this evening’s Advent Procession says:

On the first Sunday of Advent, we find ourselves in a unique position, standing both at the beginning and at the end, precisely at the turning–point of the liturgical year. This peculiar experience of living within a paradox is a characteristic of the Christian faith. However, perhaps the greatest paradox of Advent is the tension between the joyous anticipation of the birth of Jesus and the inevitability of the cross.

In one sense, Advent does not end at Christmas. The nativity, the Incarnation, cannot be separated from the crucifixion, the Atonement. The purpose of Jesus’ coming into the world, of the ‘Word made flesh’ and dwelling among us, is to reveal God and His grace to the world through Jesus’ life and teaching, but also through his suffering, death, and resurrection. So, at the beginning of things, we think about the end of things.

This evening’s readings reflect this emphasis on Christ’s second coming and include themes of accountability, judgement, and the hope of eternal life. The course of the service traces the witness of the prophets, of John the Baptist and of Mary, all of whom point us towards the birth of Jesus.

Towards the end of the service, Charles Wesley’s hymn sums up all that we have heard and reminds us of the paradox of our faith. In the words of T.S. Eliot,

‘What we call the beginning is often the end
and to make an end is to make a beginning.
The end is where we start from.’
T.S. Eliot, Little Gidding. 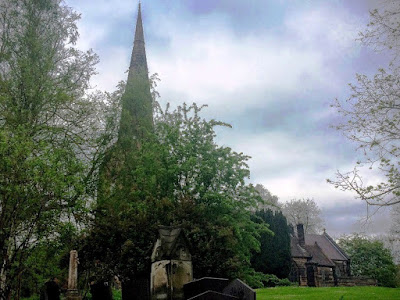 One of my favourite poems at this time of the year – and a sobering one too – is ‘Advent 1955’ by John Betjeman:

The Advent wind begins to stir
With sea-like sounds in our Scotch fir,
It’s dark at breakfast, dark at tea,
And in between we only see
Clouds hurrying across the sky
And rain-wet roads the wind blows dry
And branches bending to the gale
Against great skies all silver pale
The world seems travelling into space,
And travelling at a faster pace
Than in the leisured summer weather
When we and it sit out together,
For now we feel the world spin round
On some momentous journey bound –
Journey to what? to whom? to where?
The Advent bells call out ‘Prepare
, Your world is journeying to the birth
Of God made Man for us on earth.’

And how, in fact, do we prepare
The great day that waits us there –
For the twenty-fifth day of December,
The birth of Christ? For some it means
An interchange of hunting scenes
On coloured cards, And I remember
Last year I sent out twenty yards,
Laid end to end, of Christmas cards
To people that I scarcely know –
They’d sent a card to me, and so
I had to send one back. Oh dear!
Is this a form of Christmas cheer?
Or is it, which is less surprising,
My pride gone in for advertising?
The only cards that really count
Are that extremely small amount
From real friends who keep in touch
And are not rich but love us much
Some ways indeed are very odd
By which we hail the birth of God.

We raise the price of things in shops,
We give plain boxes fancy tops
And lines which traders cannot sell
Thus parcell’d go extremely well
We dole out bribes we call a present
To those to whom we must be pleasant
For business reasons. Our defence is
These bribes are charged against expenses
And bring relief in Income Tax
Enough of these unworthy cracks!
‘The time draws near the birth of Christ’.
A present that cannot be priced
Given two thousand years ago
Yet if God had not given so
He still would be a distant stranger
And not the Baby in the manger.

Almighty God,
Give us grace to cast away the works of darkness
and to put on the armour of light
now in the time of this mortal life
in which your Son Jesus Christ came to us in great humility;
that on the last day
when he shall come again in his glorious majesty
to judge the living and the dead,
we may rise to the life immortal;
through him who is alive and reigns with you and the Holy Spirit,
one God, now and for ever. Amen.

The season of Advent begins today [27 November 2016], and later this morning I am presiding at the Cathedral Eucharist in Christ Church Cathedral, Dublin, at 11 a.m., and taking part in the Advent Procession in the cathedral at 5 p.m. this evening.

The prayer at the lighting of the first candle on the Advent Wreath on the First Sunday of Advent recalls the Patriarchs and Matriarchs:

O God of Abraham and Sarai,
we thank you for your faithfulness throughout all time.
As today we begin our Advent journey
may the light of your love
surround your church across the world,
as we watch and wait for your kingdom.

The Anglican mission agency USPG (United Society Partners in the Gospel) has produced an Advent Prayer Card to accompany lighting the Advent Candles.

This year, as you light your Advent candles, USPG invites us to pray for mothers and babies in Tanzania and around the world. The four Advent candles remind us that the coming of Christ was anticipated over many generations. Each Sunday of Advent we remember faithful participants in that journey of faith: the Patriarchs and Matriarchs, the Prophets, Saint John the Baptist, and finally the Virgin Mary. The fifth candle, lit on Christmas Day, reminds of the birth of Jesus Christ, Saviour of the World.

‘In my parish, many women are the victims of violence but afraid to speak out. I try to show them I am trustworthy. I wasn’t sure how to do this, but the training I received has helped greatly. I want women to know the church is on their side. Jesus himself was an activist on exactly these kinds of issues.

‘When I preach, I speak about love. Love, I say, is about having respect for one another, whoever we are, whatever we’ve done.

‘I am committed to the education of children and women, from the cradle to the grave, so to speak. Currently, the church is saying surprisingly little about GBV and I want this to change. The churches need to wake up. Tackling GBV is not an optional extra – it affects every area of life. We need to change the mindset of clergy. People need to know they belong to a greater community, which is God’s community; people need to know they are valuable and have a right to the abundant life that Jesus offers.’

Loving God, you long for us to live in peace, we grieve with you for the violence in our world. Help us to protect the vulnerable and all who suffer, offering with love a safe place to all in need.