May balls, strawberries and punting 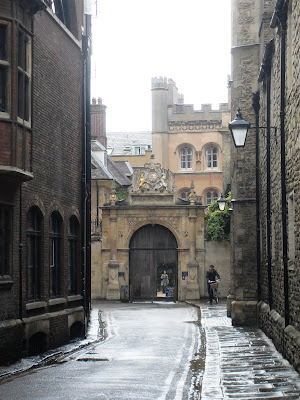 I was back in Cambridge yesterday for a second time in a week. Despite the heavy rain that interrupted the sunshine, there was a hint of mid-summer frivolity everywhere.

Although we are now into the closing days of June, this is “May Week” in Cambridge – a calendar anachronism, for this is June and May Week is at period of two weeks during June marked by May balls, the end of Easter or May Term on 25 June, and, for most, joyful results in exams.

In 1882, the May races were moved to June, but the name May Week has been maintained.

Most of the colleges are closed to visitors, the railings of churches and colleges are decorated brightly with colourful notices advertising concerts, recitals and plays, evening after evening. This is a time for private parties, for salmon mayonnaise and strawberries and dancing until dawn, followed by punting parties up the river to breakfast at Grantchester.

Sidney Sussex College, which produces a well-regarded ball for a smaller college, created headlines last year when an artificial lake and canal was created to enable punting at the landlocked college. But like many smaller colleges, Sidney only holds a May Ball every second year.

When several balls are held on the same evening, the River Cam is lit up in colours from the lights and the fireworks, creating a memorable backdrop to the evening’s festivities.

Taxis are hard to find, even at the usually lengthy taxi stand outside the main gate of Christ’s College in Saint Andrew Street, and the railway station is busy with men and women dressed in their evening best.

But it was a good time too to browse in some of Cambridge’s great bookshops, especially the bookshop of the Cambridge University Press, across the street from King’s College, Clare College and the Senate House.

This is one of the oldest bookshops in England, and it was a pleasure to spend an afternoon here, without wondering about the weather outside. CUP remains the Queen’s Printer of the King James Version of the Bible, 400 years after its first publication.

I bought the Church Times in Great Saint Mary’s and missed the heaviest shower of the afternoon as I enjoyed a late lunch in the B Bar in Market Passage, close to Sidney Sussex College.

Later, strolling down Trinity Lane towards Trinity College, on this Wednesday after Trinity Sunday, I was reminded once again of the poem After Trinity by John Meade Falkner (1858-1932):

The long journey home was ahead of me, and I headed back to Stansted for the flight back to Dublin. It shall be much quieter when I return to Sidney Sussex next month for the summer school organised by the Institute for Orthodox Christian Sudies.
Posted by Patrick Comerford at 08:02 No comments: