This illustrated feature is published in the October 2014 (Issue 64) edition of the Lichfield Gazette (pages 34-36): 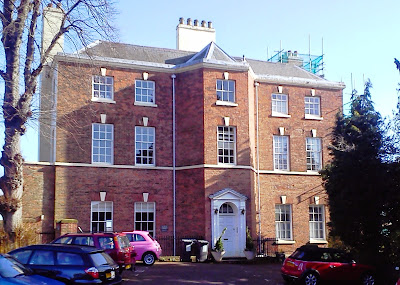 As I was leading a recent walking tour of the Cathedral Close, organised by Kate Gomez and Lichfield Discovered, I found myself telling the engaging stories of scandal, snobbery and spite that surrounded the lives of residents of The Close over the centuries.

The best-known Close scandal is the story of the affair between the poet Anna Seward and John Saville, a married man who was a Vicar Choral in the cathedral. But I was also asked about the stories that have grown up around Selwyn House, which stands on the site of the mediaeval moat at the east end of The Close.

Selwyn House is often known as “Spite House” because of a popular Lichfield legend that the first house on the site was built by one of three sisters in the 1750s to block her sisters’ view of the cathedral.

Elizabeth Aston, daughter of Sir Thomas Aston, lived in Stowe Hill, later Stowe Hill House, and died in 1785. Her sister Jane, wife of the Revd Francis Gastrell, is linked with Stowe House. It was home first to the Revd Thomas Hinton of Saint Chad’s, who died in 1770, and later home to Richard Edgeworth and his family and Thomas Day. The third house was empty in 1777 and is never mentioned again.

A legend developed that a third, unmarried sister built Selwyn House to spoil the view of the cathedral her sisters had from Stowe Hill and Stowe House. She is said to have resented being shuffled between the houses by her sisters, and in a fit of pique built a house as tall as possible to block their view. And so it was called “Spite House” or the “Hate House.”

In 1930, in her biographical book, An Autograph Collection, Lady Charnwood, who lived at Stowe House, said the story had “no foundation, still less authority.” 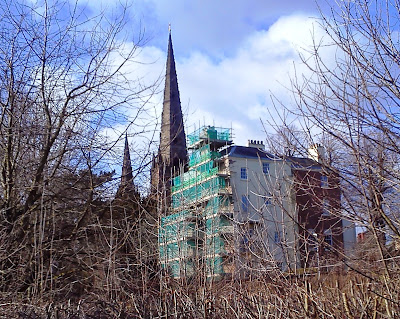 Lichfield Cathedral can be seen from the area behind Selwyn House ... ruling out any legends of ‘spite’ (Photograph: Patrick Comerford, 2014)

Later, in the early 1970s, F Marston, a local historian, carried out an extensive study of the legal titles to the land, the building records for the house, and measured the distances and angels between Stowe Hill and Stowe House and both Selwyn House and the Cathedral. He too concluded there was no foundation to the legend.

We can date the building of Selwyn House because it does not appear on the Conduit Lands Trust map of 1766. The deeds to the house point to an initial lease around 1777 and it appears on John Snape’s map in 1781. It is built at the southern-most edge of the site, as close as possible to the canonical house that later became Saint Mary’s House, and it is not possible that it ever blocked the view from either Stowe House or Stowe Hill of the Cathedral.

When Marston inspected the deeds and measured the distances, he concluded that the story is no more than a “calumny, so often repeated, against a person who never existed.” But, as Annette Rubery says in her book Lichfield Then & Now in colour, “Even though the facts have since been since been disproved, the tale still lives on.” 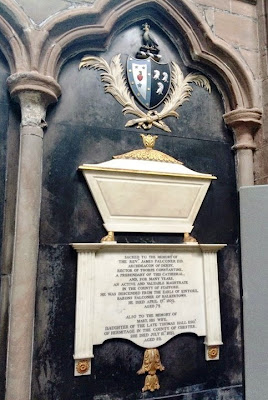 The truth is Selwyn House was built ca 1777-1780 for Canon James Falconer (1735-1821), Rector of Thorpe Constantine and later Archdeacon of Derby. He was a close friend of Anna Seward’s father, Canon Thomas Seward. He was a canon of Lichfield Cathedral but was not assigned one of the houses for Canons in the Close. So Falconer may have built the house immediately after his appointment as a Canon of Lichfield Cathedral.

A sad story illustrates the silly snobbery in The Close at the time. When Falconer’s eldest daughter, Elizabeth, became engaged to the Revd John Batteridge Pearson, the archdeacon and his wife opposed the marriage, believing Pearson was not their daughter’s equal in birth or fortune, although he was the Perpetual Curate or Vicar of Saint Michael’s, Lichfield. 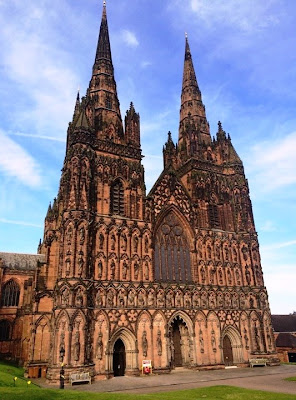 Lichfield Cathedral ... John Pearson became a canon in 1790 but never received a canon’s house in the Close (Photograph: Patrick Comerford, 2014)

However, when Samuel Johnson’s step-daughter, Lucy Porter, left Pearson her fortune, the Falconers quickly withdrew their objections. A year after Lucy Porter’s death, the couple were married in Saint Mary’s Church in 1787. But even then, Mrs Falconer was so annoyed she lay in bed all day.

Falconer was a forceful character who was nicknamed ‘Dr Impudence.’ In contrast, his son-in-law was known as ‘a most amiable and excellent man’ and was nicknamed ‘The Peacemaker.’ So what was Pearson’s connection with Dr Johnson?

Johnson was also a friend of the two sisters at Stowe Hill and Stowe House. Pearson knew Johnson since at least 1776, we know, for both Pearson and Canon Seward supped with Johnson and Boswell at the Three Crowns Inn in Breadmarket Street on 25 March 1776. In 1779, Pearson became Vicar of Croxall, Derbyshire, but he remained at Saint Michael’s in Lichfield. 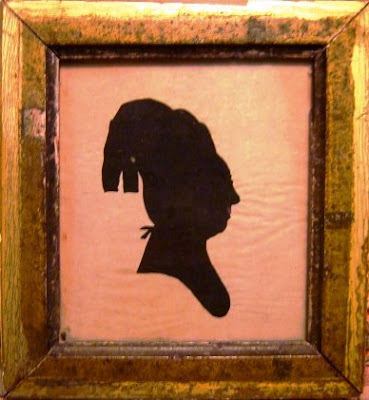 Dr Johnson’s letters show Pearson was very intimate with Lucy Porter during her later years, and even wrote her letters when she felt disinclined to write herself. At times, he was the only person she would see, and in a letter to Boswell on 25 March 1785, Anna Seward tells him Lucy Porter is “now too ill to be accessible to any of her friends, except Mr Pearson.”

A year after Lucy Porter’s death, Pearson – now a man of means – married Elizabeth Falconer in Saint Mary’s Church on 17 September 1787. On 20 March 1790, two weeks after Thomas Seward’s death, Pearson became a canon in Lichfield Cathedral, but he never received a Canon’s house in The Close.

His eldest son, the Revd George Pearson, was baptised in 1791 in Lichfield Cathedral by his grandfather, Archdeacon Falconer, and the child’s sponsors included the Earl of Belfast, later Marquis of Donegall, who gave his name to Donegal House in Bore Street. Pearson’s third son, Captain John Pearson, was baptised in Saint Mary’s by Archdeacon Falconer, and his sponsors included Lord Donegall.

Pearson moved into Lucy Porter’s house when she died, and lived there with his family until he moved to Croxall in 1801. He died in Croxall in 1808; his widow, who survived him for almost half a century, inherited Selwyn House when her sister died. She stayed there until 1824, and died in 1856 in Hill Ridware, aged 72.

Incidentally, the fortune Pearson inherited from Lucy Porter included her house and a number of valuable relics from Dr Johnson, including the manuscript of his dictionary – later put in the loft in Lichfield, where it was eaten by rats; the bust of Dr Johnston taken after his death – it was displayed on a shelf over a door but fell and broke when the door slammed; and his walking stick – lost when the family home burned down accidentally ca 1917. However, his writing desk, some of his letters and a signed copy of his dictionary survived.

Lucy Porter (1715-1786) was the daughter of Henry Porter, a Birmingham mercer and wool merchant, and his wife Elizabeth who, when she was widowed, married Samuel Johnson. She was just six years younger than her new stepfather, and their friendship grew increasingly warm as the years passed. She continued to live in Lichfield after her mother moved to London, living with Johnson’s mother Sarah, and helping her to run the bookshop. Lucy inherited £10,000 on her brother’s death and built herself a large house on Tamworth Street that was demolished in the 1920s.

Meanwhile, what about Archdeacon Falconer, who had Selwyn House built or rebuilt for him? About the mid-1780s, he built two cold baths near Parchment House north of Stowe Pool. His nephew, Dr William Falconer of Bath, was an authority on cold-water cures. When the Archdeacon died in 1809, his widow continued to live in the house. When she died in 1821, the house passed to one daughter, Catherine Miles, widow of Colonel Edward Miles, and then to the other daughter, Elizabeth Pearson, widow of Canon HB Pearson. But the house passed out of the family in 1824. 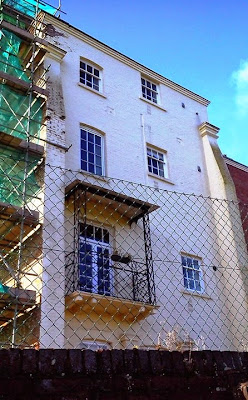 The balcony is a later addition to Selwyn House (Photograph: Patrick Comerford, 2014)

The house was enlarged in the early 19th century, when an iron balcony was added on the north side. At the beginning of the 20th century, it was home to Harriet Selwyn, widow of a former Bishop of Lichfield, George Augustus Selwyn, who give his name to Selwyn College, Cambridge, and who is buried in Lichfield Cathedral.

The theological college closed in 1972 and Selwyn House was divided into flats. But the legends about a Spite House persisted.