Singing ‘Silent Night’
after 200 years and
still praying for peace 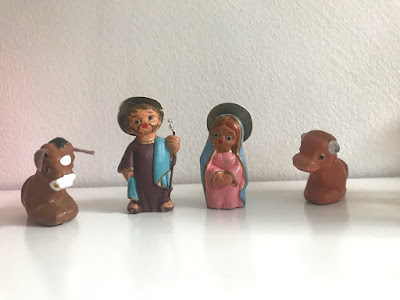 I was involved in the Tarbert Community Carol Service in Saint Brendan’s Church, Kilnaughtin, Co Kerry last night [13 December 2018]. So far this season, there have been carol services in Tarbert, Rathkeale and Limerick, and there are more in my diary in Askeaton and Rathkeale.

It seems that one of the most popular Christmas carols is still ‘Silent Night’ (Stille Nacht, heilige Nacht), and it continues to retain its popularity although it was written 200 years ago.

‘Silent Night’ was written by Joseph Mohr (1792-1848) and Franz Xaver Gruber (1787-1863) and was first performed on Christmas Eve 1818 at Saint Nicholas parish church in Oberndorf bei Salzburg, a village on the Salzach river in Austria,.

Father Joseph Mohr, who had moved to Oberndorf as a young priest year before, had written the lyrics of Stille Nacht in 1816 in Mariapfarr, his father’s hometown in the Salzburg Lungau region. The melody was composed by Franz Xaver Gruber, a schoolmaster and organist in the nearby village of Arnsdorf.

Before Christmas Eve 1818, Mohr brought his words to Gruber and asked him to compose a melody and guitar accompaniment for the Christmas Eve Mass that year. No one seems to know what inspired Joseph Mohr as he wrote the lyrics, or what prompted him to create a new carol.

According to Gruber, Karl Mauracher, an organ builder who looked after the organ in the church in Obendorf church, was enamoured with the song, and took the new work home with him to the Zillertal, a valley in the Tyrol. From there, two travelling families of folk singers, the Strassers and the Rainers, included the tune in their shows.

The Rainers were already singing it by Christmas 1819, and they performed it in a concert where the audience included Franz I of Austria and Alexander I of Russia, as well as singing the song for the first time in the US, in New York in 1839.

Meanwhile, the first edition was published by Friese in 1833 in a collection of Four Genuine Tyrolean Songs.

By the 1840s, the song was well known in Lower Saxony and was reported to be a favourite of Frederick William IV of Prussia. By then, the melody had changed slightly to the version we know today.

In 1859, an Episcopal priest, John Freeman Young (1820-1885), then serving at Trinity Church, New York City and later Bishop of Florida, published the English translation that is most frequently sung today, translated from three of Mohr’s original six verses.

John Freeman Young was born in Pittston, Maine, on 30 October 1820. He began a course of studying science at Wesleyan University in Middletown, Connecticut, in 1841, but left after his first year.

He then joined the Episcopal Church and began studies at Virginia Theological Seminary in Alexandria, graduating in 1845. He was ordained a deacon that year, and was assigned to Saint John’s Church, Jacksonville, Florida, where he was ordained priest in 1846. At that time, he was one of only two Episcopal priests in active parochial service in the entire state, serving until 15 December 1847. He then moved to various posts in Texas (1848-1851), Mississippi (1852-1853) and Louisiana (1854-1855).

Young had an early interest in church architecture. Example of his work include the Chapel of the Cross, Madison, Mississippi (1848), and a gothic- style church in Napoleonville, Louisiana (1854).

In 1855, Young became an assistant at Trinity Church, New York, where he served until his consecration as Bishop of Florida in 1867. During his time in New York, he collected and translated great Christian hymns from various traditions.

He published Carols for Christmas Tide, a 16-page pamphlet, in 1859. The first of the seven carols in this collection was his definitive English translation of Stille Nacht! Heilige Nacht! under the title Silent Night, Holy Night. In 1860 and 1861, he published Hymns and Music For The Young, in two parts.

Young also served as the secretary of the Russian-Greek Committee of the General Convention, and he edited the committee papers on furthering inter-communion between the Orthodox and Anglican churches. For this work, he received the degree of STD (Doctor of Sacred Theology) from Columbia College in 1865.

Trinity Church in New York is near the Alexander Hamilton memorial where, in 1839, the Rainer singers included Stille Nacht in their repertoire. However, Young did not move in Trinity Church until 16 years later, in 1855. It has also been said that Young first heard Stille Nacht while he was travelling in England, Europe and Russia in 1863 or 1864, but his translation was first published before this, in 1859.

Young was consecrated the second Bishop of Florida on 25 July 1867. The principal consecrating bishop was the Dublin-born Presiding Bishop, John Henry Hopkins (1792-1868), first Bishop of Vermont.

The church in Florida had been so devastated by the American Civil War that the Committee on the State of the Episcopal Church wrote that it was a ‘wonder’ that the church in Florida still had ‘an organised existence at all.’ Bishop Young described that time as ‘a struggle for life.’ But through his efforts from 1875 to 1885, the church grew from 20 parishes or missions and 14 clergy to 48 congregations ministered to by 36 clergy.

Bishop Young died of pneumonia in New York on 15 November 1885. His Great Hymns of the Church (New York, 1887) was published posthumously.

Over the years, the original Austrian manuscript of this carol was lost, Mohr’s name was forgotten and, although Gruber was known as the composer, many people assumed the melody was composed by a famous composer, such as Haydn, Mozart or Beethoven.

However, a manuscript was discovered in 1995 in Mohr’s handwriting and dated by researchers to around 1820. It says Mohr wrote the words in 1816 when he was assigned to a pilgrim church in Mariapfarr, Austria, and shows that the music was composed by Gruber in 1818. This is the earliest manuscript that exists and the only one in Mohr’s handwriting.

The carol has been translated into about 140 languages. But Young’s relationship to his famous translation remained largely unknown until research by the Revd Byron Edward Underwood, Rector of Saint Ann’s Episcopal Church, Revere, Massachusetts, was published in 1957.

In 1998, the Silent Night Museum in Salzburg commissioned a new English translation by Bettina Klein of Mohr’s German lyrics. For example, where

is translated by Young as,

Round yon virgin, mother and child.
Holy infant so tender and mild

a translation that is closer to the original.

On Christmas Eve 1914, as the guns fell silent on the eve of the first Christmas in World War, the German troops in the trenches in Belgian sang out the words of Stille Nacht, and the British troops responded by singing Young’s translation of Silent Night.

The story has been moved to the following year in the song ‘A Silent Night Christmas 1915,’ written by Cormac MacConnell. It was one of the songs Tommy Fleming included in his concert in Holy Trinity Church, Rathkeale, last Saturday [8 December 2018].

The carol has been recorded by a large number of singers from every music genre. The version sung by Bing Crosby is the third best-selling single of all-time. It was declared an intangible cultural heritage by UNESCO in 2011.

The ‘Silent Night’ exhibition runs from Monday next 17 December until Friday next 21 December, and from 3 January until 7 January 2019 at the President’s Arch in Saint Patrick’s College, Maynooth. The exhibition is free of charge and open to the public from 9am to 6pm.

Here, Dr John O’Keeffe, Director of Sacred Music, talks about the history of ‘Silent Night’ and the significance of the exhibition:

Praying in Advent with USPG
and Lichfield Cathedral
(14): 14 December 2018 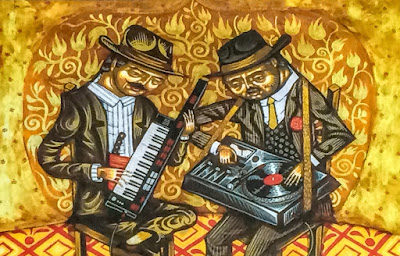 ‘… this generation … is like children sitting in the marketplaces and calling to one another, “We played the flute for you, and you did not dance; we wailed, and you did not mourn” …’ (Matthew 11: 16-19) … (Photograph: Patrick Comerford)

Today the calendar of the Church remembers Saint John of the Cross (1542-1591), the Spanish Carmelite friar and mystic and friend of Saint Teresa of Ávila. He was a major figure in the Counter-Reformation and a mystic, and is also recognised as a Doctor of the Church. Born Juan de Yepes y Álvarez near Ávila, he – like Saint Teresa – was a member of a converso family, descended from Jews who were forced to convert to Christianity at the time of the Spanish Inquisition.

Give thanks for the support of USPG for gender justice programmes run by churches in the Anglican Communion in Asia and Africa. 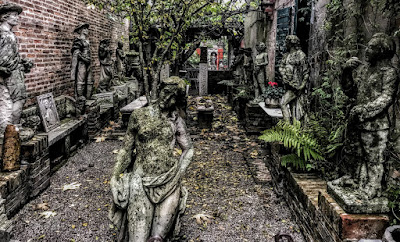 ‘Spend 10 minutes in silence’ … silent figures in a yard in Torcello in the Venetian lagoon look forgotten and forlorn (Photograph: Patrick Comerford, 2018)

Pray for real wisdom and discernment in the way you lead life today. Spend 10 minutes in silence.