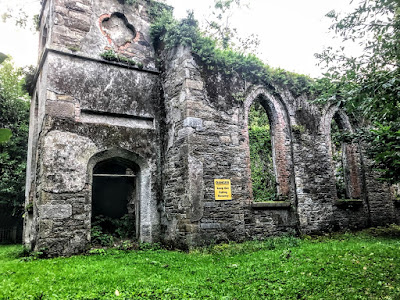 While I visited Cappoquin, Co Waterford, last month on the first leg of this year’s ‘Road Trip,’ I visited two churches in the area that no longer serve as churches in the Church of Ireland: the former church in Villierstown, and the church ruins at Affane, close to the entrance to Dromana House.

Affane is a small village in west Waterford, 3km south of Cappoquin, on the north side of the Cappoquin-Aglish road and close to the banks of the River Blackwater.

The first references to a town at Affane are limited. It was included on a list in 1300. The parish church of Affane was listed as Athmethan and valued at over £6 in the ecclesiastical taxation in 1302-1306. There are reports of an incident in 1312.

The presence of a church and castle 300 metres apart indicates how Affane was an important mediaeval settlement. The list of Vicars of Affane dates from the late 15th century, although it is incomplete after that.

The Battle of Affane between the Fitzgeralds of Desmond and the Butlers of Ormond clans was fought in the area in 1565 at a ford over the Finisk, a tributary of the Blackwateron, and close the later bridge and gate lodge at the entrance to Dromana House.

By the mid-16th century, Affane had been united with the church of Dungarvan, but in a visitation of 1588 it was in the Deanery of Ardmore. The list of Vicars of Affane resumes in the early 17th century, and they were often also Vicars Choral of Saint Carthage’s Cathedral, Lismore, or chaplains to the Earls of Cork in Lismore Castle.

John Lane was later Dean of Waterford in 1602 and Archdeacon of Lismore in 1610.

Stephen Jerome, who was Vicar of Affane in 1631, was later committed to prison by the Irish House of Lords for preaching a sermon in Christ Church Cathedral, Dublin, ‘traducing their majesties.’ However, escaped to Manchester.

After the Caroline Restoration, the Parish of Aglish was united with Affane in 1662. 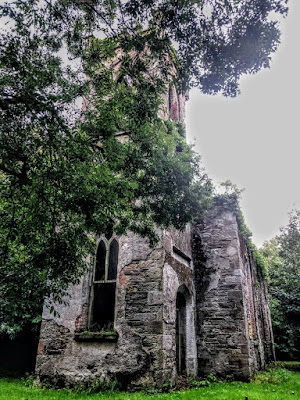 A new church was built in Affane in 1819, and in 1837 the church was described the church as ‘a neat building’ built by the late Board of First Fruits with a loan of £500.

The church at Affane was a typical Board of First Fruits Church and it cost £500 to build. It had seating for 200 people and was built to a very simple design with a single-bay, three-stage entrance tower at the west end.

The church had a nave-with-entrance tower and was aligned on a liturgically-correct axis. The slender profile of the windows underpin a mediaeval Gothic-style design, and the chancel had an East Window with curvilinear glazing bars. The tower was embellished with battlements.

The church is now closed and the picturesque ruins are surrounded by a graveyard. Many of the graves date from 1820 to 1920, indicating a large Church of Ireland community in the area until the early 20th century.

Valentine Greatrakes (1628-1682), who is buried in the churchyard, was a 17th century faith healer popularly known as ‘The Stroker’ who toured England in 1666, claiming to cure people by the laying on of hands.

Valentine Greatrakes was born on Saint Valentine’s Day, 14 February 1628, in the family home at Norrisland, New Affane. His parents were William Greatrakes and Mary Harris, daughter of Sir Edward Harris, Second Justice of the King’s Bench in Ireland and Chief Justice of Munster.

Valentine’s grandfather had moved from Derbyshire to Co Waterford after the Plantation of Munster. At the outbreak of the Munster Rebellion in 1641, his mother decided to move the family to England to live with her brother Edward Harris in Devon. Valentine returned to Ireland in 1647 and for a year he lived in ‘contemplation’ at Cappoquin Castle, later the site of Cappoquin House.

He became a lieutenant in the Earl of Orrery’s regiment in the Cromwellian army in 1649. On leaving the army, he returned to his family home in 1654. He was appointed Clerk of the Peace for Co Cork and Register of Transplantation, but he lost these positions after the Caroline Restoration.

Valentine Greatrakes believed he could cure people of illnesses and diseases. He was popularly known as ‘The Stroker’ because of his method of stroking his patients with his hands. His first patient, William Maher of Salterbridge, Cappoquin, was a young boy who suffered from scrofula (‘the king’s evil’).

His fame as a healer spread quickly and he was so inundated with people visiting his home that he was forced to move to Youghal. However, he was summoned to the Bishop’s court in Lismore, and because he had no licence to practice, he was forbidden to lay hands on anyone else in Ireland.

Nonetheless, he was invited to England to practice his cures, and he attracted huge crowds in London. Robert Boyle of Lismore Castle, an early pioneer of modern scientific method, witnessed many of his healing sessions in London.

Greatrakes published an account of his life and cures in 1666. He was married twice and was the father of three children, two sons and a daughter.

His funeral entry at the Ulster Office of Arms or Herald’s Office in Dublin recorded that he died on 28 November 1682 at Affane, Co Waterford, and was buried in Lismore Cathedral. However, the Revd Samuel Hayman, writing in the 1860s, stated that he is buried in the aisle of the old Affane Church, beside his father. 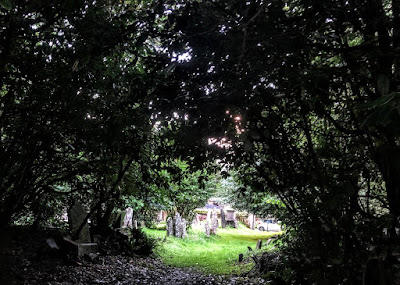 In the churchyard surrounding the church ruins at Affane (Photograph: Patrick Comerford, 2020) 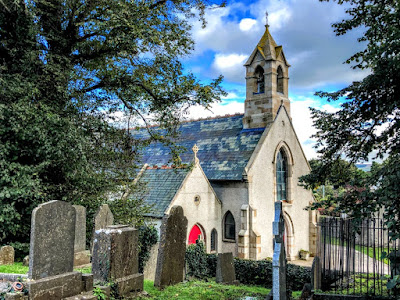 The Church of the Annunciation in Bansha, Co Tipperary, seen from the churchyard of Templeneiry Church (Photograph: Patrick Comerford, 2020)

On the way back from Cahir to Askeaton, at the end of the summer ‘Road Trip,’ we stopped between Cahir and Tipperary to visit the village of Bansha, Co Tipperary, on the N24, 13 km north-west of Cahir and 8 km south-east of Tipperary Town.

It is always interesting when I find that two parish churches in an Irish town or village – the Church of Ireland and the Roman Catholic parish church – are built side-by-side on the one campus or adjoining sites.

I am aware of this since childhood with the two parish churches in Cappoquin, Co Waterford, where the two churches – Saint Anne’s and Saint Mary’s – stand on the same street corner. 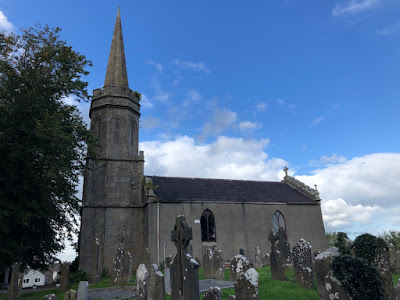 Templeneiry Church in Bansha, Co Tipperary, seen from the churchyard of The Church of the Annunciation (Photograph: Patrick Comerford, 2020) 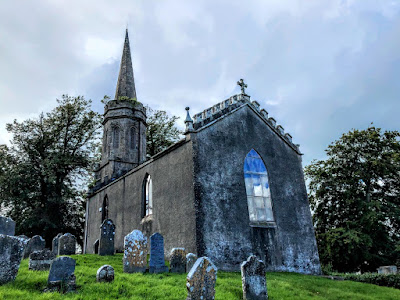 Templeneiry Church stands on an ancient site … it was built in 1718, and the spire was added in 1813 (Photograph: Patrick Comerford, 2020)

The Church of Ireland Parish Church of Templeneiry dates from 1718, but is now closed; the Roman Catholic Parish Church of the Annunciation was built in 1807; both are in the Diocese of Cashel and are centrally located in the village.

Templeneiry Church stands on an ancient site, and the present church dates from 1718. The imposing spire was added to the tower in 1813.

Samuel Lewis described the church in 1837 as ‘a neat building, to which a handsome spire was added in 1813.’

Until the Disestablishment of the Church of Ireland, the parish was one of the parishes linked to the Precentors of Cashel. Bansha now lies within the Cashel Cathedral Group of Parishes, and Templeneiry Church serves as a community-run heritage, cultural and information centre. 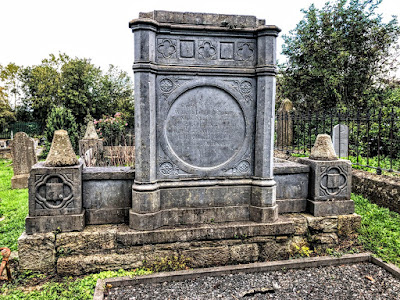 The grave of William Baker of Lismacue House, murdered in 1815, and his family (Photograph: Patrick Comerford, 2020)

The surrounding churchyard includes the graves of many old local families. The most notable grave is that of William Baker, a magistrate, of Lismacue House.

William Baker was the son of Colonel William Baker and Elizabeth (Massy) of Lismacue. In 1805, she married Elizabeth Roberts, daughter of Sir Thomas Roberts (1738-1817) and Amy Johnson, on 21 August 1805.

He built Lismacue House in 1813, which became the home of the Baker family. Two years later, however, Baker was murdered the age of 48 at Thomastown, Co Tipperary, on 27 November 1815, on his way home from Cashel Sessions. Eventually, two men were arrested, and one was convicted and hanged based on the testimony of the other. 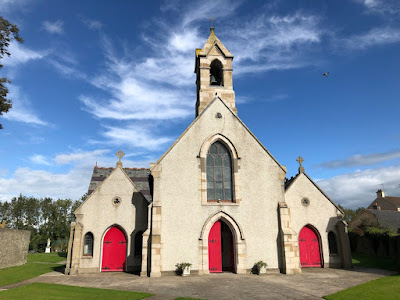 The Church of the Annunciation in Bansha was built in 1807 and the porches and the sacristy were added in 1948 (Photograph: Patrick Comerford, 2020)

The Church of the Annunciation was built on the adjoining site in Bansha in 1807, and the porches and the sacristy were added in 1948.

This pre-Emancipation, early 19th century church is enlivened by many details, including a large, elaborate decorative west window, trefoils, and corner buttresses.

The church is set in landscaped grounds with the graveyard on the north side of the site. 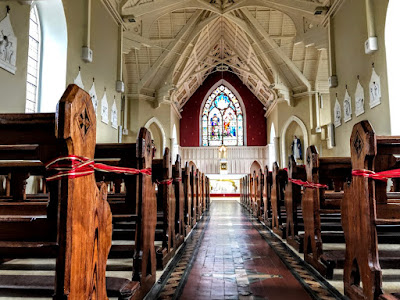 Inside the Church of the Annunciation, with its scissor truss roof structure (Photograph: Patrick Comerford, 2020)

Inside the church, the features included three large timber galleries at the west end and in the transepts, the scissor truss roof structure, the very fine carved panelling at the back and sides of the chancel, triple-tiered ogee-headed arcades, the timber confession boxes and pews, the pointed-arch statue recesses and the carved marble Stations of the Cross.

This well-maintained church displays a great range of decoration, and various additions from the mid-20th century are in harmony with the earlier church building. 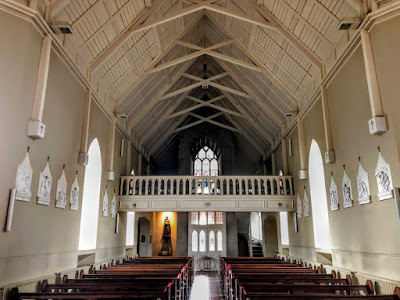 Inside the Church of the Annunciation, with the timber gallery in the west end (Photograph: Patrick Comerford, 2020)

One of Bansha’s famous residents was Lieutenant-General Sir William Francis Butler (1838-1910), a soldier, writer and adventurer, who lived in retirement at Bansha Castle from 1905 until his death on 7 June 1910.

His wife, the battle artist Elizabeth Thompson (1846-1933), Lady Butler, continued to live at Bansha Castle until 1922, when she went to live at Gormanston Castle, Co Meath, with their youngest daughter, Eileen, who married Jenico Preston (1878-1925), 15th Viscount Gormanston, in 1911.

Lady Butler’s famous paintings include The Roll Call and Balaclava, depicting scenes in the Crimean War. When she died in 1933, she was buried at Stamullen, near Gormanston, Co Meath. 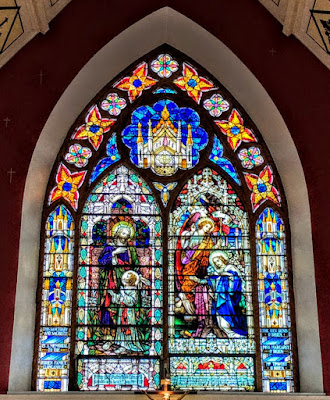 The East Window in the Church of the Annunciation, Bansha (Photograph: Patrick Comerford, 2020) 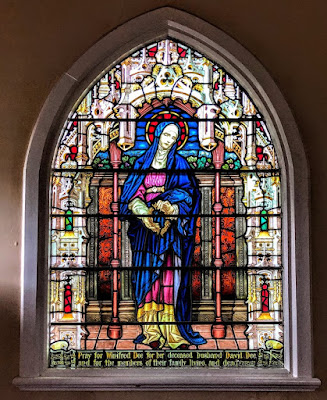 A stained-glass window in the Church of the Annunciation, Bansha (Photograph: Patrick Comerford, 2020)