The Tudor plaque on the wall of the Sexton’s House beside Saint Canice’s Cathedral, Kilkenny (Photograph: Patrick Comerford, 2014)

For the last two or three days, I was staying in the River Court Hotel in Kilkenny on the banks of the River Nore, with Kilkenny Castle rising above on the opposite bank. Between the castle and the hotel, the River Nore was flowing fast and steady, carrying the heavy rain waters of recent days and nights.

Although we had to step carefully and gingerly around the puddles in the car park and along John Street on our way each day to Saint John’s Church, Kilkenny, mercifully, has been spared the worst of the floodings that have deluged the rest of the island this week.

Saint John’s Church and the area around John Street once formed a separate district outside the walled city of Kilkenny. Indeed, the mediaeval city of Kilkenny on the other side of the river was divided into two separate towns, each clearly delineated with its own civic government, market, courts, constables and parliamentary representation: Hightown (or the English town) and Irishtown, separated from each other by the city walls and the River Breagagh, which flows into the River Nore just below Green’s Bridge.

The Watergate Bridge separates Irishtown from the rest of Kilkenny. Though the present bridge is fairly modern, there has been a bridge on this site since the 13th century.

Hightown, which grew up under the castle walls, received its first charter from William Marshall, later confirmed by Edward III; the first mayors of this town were the Sovereigns of Kilkenny before Kilkenny received its charter as a city.

Irishtown claimed the Bishop of Ossory as its patron and lord of the manor, and the portreeve was the equivalent of its mediaeval mayor. Saint John’s too had its own portreeve.

Each town jealously guarded its rights, claims, privileges and independence. Although Elizabeth I granted a single charter to Kilkenny in 1574, Irishtown continued to elect its own Portreeve and corporation, and a new portreeve was sworn in each year on Saint Canice’s Day by the Bishop of Ossory.

Another attempt at uniting the two towns came in 1609 when a charter from James I gave Kilkenny city status with one Mayor. But the separate identity of Irishtown persisted with tenacity. Portreeves continued to be elected and sworn-in by the bishops, and the town had its own three gates: Dean’s Gate, Troy’s Gate, Water Gate and Green Gate.

The Bishops of Ossory and the people of Irishtown continued to assert their autonomy until the Act of Union when the parliamentary constituency of Irishtown was abolished in 1800 and the Bishop of Ossory sought compensation for the loss of privileges as Lord of the Manor of Newcourt or Irishtown, which still had its own Portreeve, Burgesses and Commoners, with the rights, liberties and privileges of a corporation.

During this week’s conference, four of us strolled from High Street through Parliament Street, across the bridge into Irishtown, and climbed the steps from Dean Street up into the Cathedral Close. At the top of the steps, a sculpted stone plaque with the royal coat of arms set into the east wall of the Sexton’s House, is a reminder of the separate mediaeval and Tudor heritage of Irishtown.

The Latin lettering in large capitals in four rows reads:

The original inscription would have read:

Edward, by the Grace of God, King of England, France and Ireland VI (i.e., Edward VI).

Although the plaque refers to Edward VI, but the coat-of-arms is that of his father, Henry VIII, whom he succeeded as king in 1547.

The Tudor symbols in the heraldic decoration include the crown, the quartered arms of France and England, the Welsh Dragon, the English greyhound, the Tudor rose combining the red rose of Lancaster and the white rose of York and the Beaufort portcullis, but not the Order of the Garter.

Henry VIII was proclaimed King of Ireland in 1541, and the decision to place his arms in Saint Canice’s Cathedral may have been taken after the Act of Supremacy was passed. It seems before work on the plaque was completed, Henry had died and was succeeded by his son Edward. The Latin inscription was altered, but the former coat-of-arms was left in place.

I wonder when the plaque was moved from Saint Canice’s Cathedral to this wall. Like the mediaeval and renaissance graves in Saint Mary’s churchyard at the heart of the old Hightown, this weather-worn plaque in the heart of the old Irishtown is vulnerable and in need of restoration. Another part of Kilkenny’s heritage is calling out for attention before it is lost to future generations. 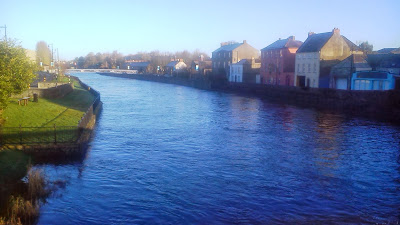