When all is not calm nor bright 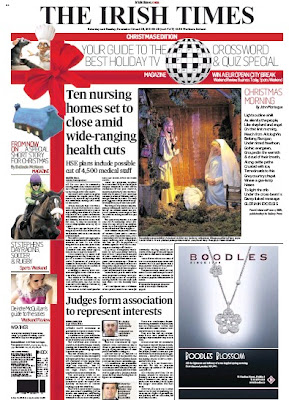 When all is not
calm nor bright

WHEN WE wrap our gifts in festive colours, and decorate our homes and workplaces with lights and tinsel, it is easy to think we have bundled our fears and despair away – at least for the next week or two. Our popular celebrations of Christmas become comfortable and comforting as we sing carols and try to convince ourselves that “all is calm, all is bright”. Yet all is not calm in our economy, nor is all bright for those who live in dark fear of poverty or what the future holds.

Our well-wrapped, warm and homely celebrations this season forget that the first Christmas was one filled with fear and dread. The Gospel story being read in most churches tomorrow morning is St Luke’s account of the first Christmas (Luke 2: 1-20). Immediately after the birth of the Christ Child in Bethlehem, the scene moves to a hillside where shepherds are working at night, in the dark and in the cold, easy prey to wolves, thieves and the cold weather, less valuable than the animals they tend. And the Gospel writers tell us that those poor shepherds are terrified when they see the angelic host.

The initial task of the angels is to calm those fears. Their first words to those frightened shepherds are not ones of call or command, but words to calm them: “Fear Not”. This Christmas time, when the world is a cold, frightening and uninviting place for many, the first task of the church must be to bring hope where there is fear, love where there is no peace, to give rather than receive. The angels’ call to the shepherds to “fear not” is not a platitude or an invitation to piety, but one that is linked with the promise of Good News, the promise that God’s plans for humanity and for creation are brighter than the darkness of their night: “Do not be afraid; for see – I am bringing you good news of great joy for all the people” (Luke 2: 10).

But where is there good news for the homeless, the unemployed, the elderly, the parents of vulnerable children? Where is the hope of great joy for people around the world denied democracy and human rights, for those who live in poverty and under oppression? A thought-provoking slogan in Saint James’s Church, Piccadilly, a fashionable London church, proclaims: “Christ did not come so that we could have church and that more often. He came so we could have life and that more abundantly”. For many people this Christmas, their principal fear is about life, the apprehension that they do not have the abundances to face the future without fear.

In his poem Christmas, John Betjeman dismisses the commercialisation of Christmas and challenges us to return to the truth of the Christmas message:

And is it true,
This most tremendous tale of all...
The Maker of the stars and sea
Become a Child on earth for me?

When, in Betjeman’s words, the “Christmas-morning bells say ‘Come!’ ”, we are called not only to hear the story of Christ’s birth, the story of a child born to a couple for whom “there was no place” in Bethlehem, but called too to ensure the words “Happy Christmas” are not hollow and meaningless.
Posted by Patrick Comerford at 12:45 No comments:

Christmas Poems (10): In the Bleak Mid-Winter, by Christina Rossetti 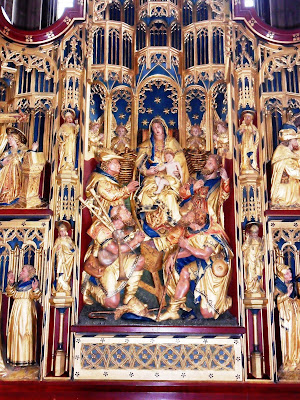 ‘If I were a shepherd,/I would bring a lamb’ (Christina Rossetti) ... the Neo-Gothic Altarpiece carved at Oberammergau in the 19th century now in the Lady Chapel in Lichfield Cathedral (Photograph: Patrick Comerford, 2011)

But then the traditional Bidding Prayer, which was written for the Service of Nine Lessons with Carols by Eric Milner-White (1884-1963) while he was Dean of King’s College Chapel, has a poetic quality to it too:

The Dean: Beloved in Christ,
be it this Christmas Eve our care and delight
to prepare to hear again the message of the angels:
in heart and mind to go even unto Bethlehem
and see this thing which is come to pass,
and with the Magi adore the Child lying in his Mother’s arms.

Let us read and mark in Holy Scripture
the tale of the loving purposes of God
from the first days of our disobedience
unto the glorious Redemption brought us by this Holy Child.
and let us make this chapel, dedicated to his pure and lowly Mother,
glad with our carols of praise:

But first,
let us pray for the needs of the whole world;
for peace and goodwill over all the earth;
for unity and brotherhood within the Church he came to build,
within the dominions of our sovereign lady Queen Elizabeth,
within this University and City of Cambridge,
and in the two royal and religious Foundations of King Henry VI here and at Eton:

And let us at this time remember, in his name,
the poor and the helpless,
the cold, the hungry, and the oppressed;
the sick and them that mourn,
the lonely and the unloved,
the aged and the little children;
all those who know not the Lord Jesus,
or who love him not,
or who by sin have grieved his heart of love.

Lastly,
let us remember before God
all those who rejoice with us,
but upon another shore and in a greater light,
that multitude which no man can number,
whose hope was in the Word made flesh,
and with whom we for evermore are one.

These prayers and praises let us humbly offer up
to the throne of heaven,
in the words which Christ himself hath taught us:

May the Almighty God bless us with his grace;
Christ give us the joys of everlasting life,
and unto the fellowship of the citizens above
may the King of Angels bring us all. Amen.

We used an adaptation of this Bidding Prayer at the two main carol services in Christ Church Cathedral, Dublin, earlier this week. 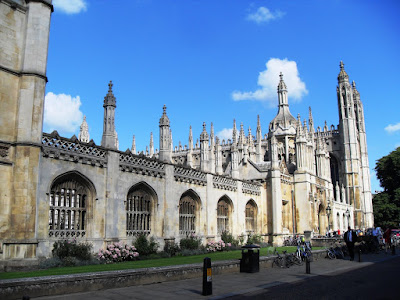 King’s College and King’s Parade, Cambridge, in the summer sunshine earlier this year ... Christina Rossetti’s poem, ‘In the Bleak Mid-Winter,’ became popular after it was included in the BBC broadcasts of the Service of Nine Lessons with Carols from King’s College (Photograph: Patrick Comerford, 2011)

The Service of Nine Lessons with Carols was first designed by Edward Benson when he was Bishop of Truro for use in his cathedral. It was later simplified and adapted for use in the Chapel of King’s College, Cambridge, for Christmas Eve in 1918.

At the time, Eric Milner-White was 34 and had just been appointed Dean of King’s Chapel, Cambridge, at the end of World War I. His war-time experiences as an army chaplain had convinced him that the Church of England needed more imaginative worship. His Order of Service was revised a year later with a rearrangement of the lessons, so that since 1919 the service always begins with the hymn ‘Once in Royal David’s City.’ He later went on to be Dean of York.

The service was first broadcast in 1928 and – with the exception of 1930 – it has been broadcast annually, even during World War II when the ancient glass, and all heat, had been removed from the Chapel.

In the early 1930s, the BBC began broadcasting the service on the World Service. It is estimated that it has millions of listeners worldwide. In recent years, a digital recording has been broadcast on Christmas Day on Radio Three, and since 1963, a shorter service, with different music and readings, has been filmed periodically for television.

Christina Rossetti’s poem, ‘In the Bleak Mid-Winter,’ became popular among choirs after it was included it in the BBC broadcasts of the Service of Nine Lessons with Carols by the Choir of King’s College, Cambridge, using the 1911 setting by Harold Edwin Darke (1888-1976). He had once been the conductor of the choir, and his setting of the poem as a carol included his beautiful and delicate organ accompaniment.

The poem had only been published for the first time seven years earlier in Christina Rossetti’s Poetic Works, ten years after her death. It was republished in 1906 The English Hymnal, edited by Percy Dearmer and Ralph Vaughan Williams. in 1906 with Holst’s setting, and it quickly became a popular Christmas carol.

Today Christina Rossetti’s ‘In the Bleak Midwinter’ is one of the most popular and best-loved carols. Some years ago, in a BBC poll of some of the world’s leading choirmasters and choral experts, it was chosen as the best-ever Christmas carol. It came out top in the BBC Music Magazine some years ago, above well-known songs and carols such as Silent Night, Ding Dong Merrily on High and Once in Royal David’s City.

Christina Rossetti was part of the Victorian arts-and-crafts movement and the pre-Raphaelite movement. She was a leading advocate of women’s rights, a campaigner against slavery and war, and a prominent member of the Anglo-Catholic movement. She wrote ‘In the Bleak Midwinter’ in 1872 in answer to a request from a magazine. But, like a lot of writers, she must have been frustrated that she never saw its publication.

So it took over 30 years, more than a generation, before this poem was first sung as a Christmas carol. Ever since then, though, it has been a firm Christmas favourite, and has been recorded by the King’s Singers, Julie Andrews, the Moody Blues, the Pet Shop Boys, James Taylor, Alison Crowe, Moya Brennan, Celtic Woman, Sarah McLachlan, Sarah Brightman and Loreena McKennitt.

But I still find this popularity surprising, because this is no popular, cosy, comfortable Christmas carol. Instead its images are harsh and bleak, and in today’s uncomfortable economic climate that are challenging and demanding once again. 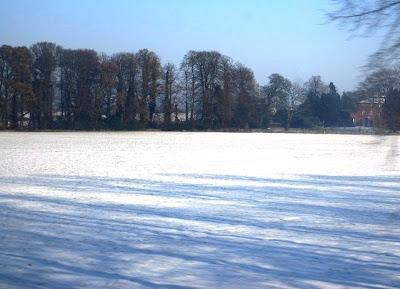 In the bleak midwinter ... snow had fallen, snow on snow ... Comberford Hall in the snow last Christmas (Photograph © Nigel Chadwick, 2010)

In the bleak midwinter (Irish Church Hymnal, No 162), by Christina Rossetti:

Our God, heav’n cannot hold him,
nor earth sustain;
heav’n and earth shall flee away
when he comes to reign:
in the bleak midwinter
a stable place sufficed
the Lord God almighty,
Jesus Christ.

Angels and archangels
May have gathered there,
cherubim and seraphim
thronged the air;
but his mother only,
in her maiden bliss,
worshipped the beloved
with a kiss. 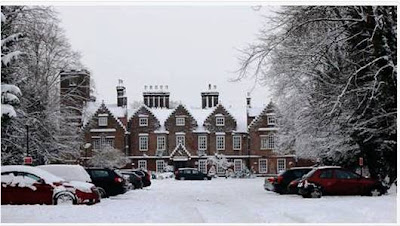 In the bleak mid-winter ... the Moat House in Tamworth in mid-winter snow