A rustic retreat in the middle of suburbia 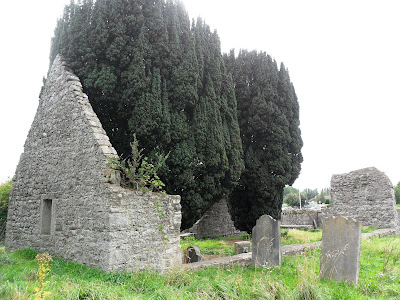 Walking back home from my GP’s surgery this afternoon, I stopped at the top of Wellington Lane, near the Spawell roundabout to look at the ruins of the old mediaeval Templeogue church and burial ground.

The church ruins stand on the site of an early monastery that gave its name to Templeogue. A list of saints in the Book of Lecan includes Molcae tigi Molocal and in 13th century documents the name of the area is given as Tachmelog – Saint Melog’s house or church.

However, no part of the church can be dated to the time of the original monastery, although may predate the Anglo-Norman Invasion of the late 12th century.

Externally, the building measures 17.68 by 5.72 metres. In recent years, it was cleared of overgrowing ivy and repaired. As I walked around the site of the church, it was like a rustic retreat in the middle of suburbia

The east gable of the ruined church is complete, with a late splayed window. The north wall is about 50 cm high, uniform, and with no indication of a door opening. The south wall has a distinct kink about halfway along with a buttress outside. The western end of this wall is about three metres high. The west wall has a doorway about midway with steps leading up to it. This wall is about one metre high, but has a buttress built against it nearly five metres high which must have been erected before the wall fell.

It is not at all certain that this doorway is the original one, but a doorway in this position would indicate an early date for this part of the church.

There are three early cross-inscribed slabs in the burial ground, one of which is deeply sunk within the church.

From the Late Middle Ages, the Parish of Templeogue was joined to Tallaght Parish, and in 1615, the church in Templeogue was said to be utterly in ruin.

Templeogue remained a small, isolated village for centuries, and it was only with the building of Templeogue Bridge in 1800 and Templeogue Road – originally a toll road – in 1801 that Templeogue became more accessible. Today, Templeogue Village still has only one pub – the Templeogue Inn, better known to generations of Dubliners as ‘The Morgue.’

Behind the old mediaeval monastic site and the church ruins, stands Templeogue House, built on the site of Templeogue Castle, which was at the heart of the mediaeval Templeogue estate.

Templeogue belonged in the 14th century to the Harold family. By the 16th century, it had passed to the Talbot family, who held them for about two centuries.

The landowners of Templeogue had the duty of maintaining the City Watercourse which flowed through Templeogue. For this, they he received a tribute of corn from mills using the water.

Although the church had fallen into ruins by the early 17th century, in 1655 it was reported that Templeogue Castle was in repair. Henry Talbot was ordered to transplant to Connaught, but was later restored to his ancestral home at Templeogue.

The Domville family erected a brick mansion on the site of Templeogue Castle, and incorporated the vaulted undercroft and two circular towers of the castle into the new Templeogue House.

Sir Compton Domville laid out the grounds, using the City Watercourse which flowed through the garden as one of the main features. The course was in a direct line with the front door of the house and the water was made to flow over a series of steps, on each of which stood a statue. The Domvilles claimed the same rights over the Watercourse as those once held by the Talbots, and in addition to the tribute of corn from the mills they received rents from the Chapter of Saint Patrick’s Cathedral and from the Earl of Meath who held the former lands of Saint Thomas’s Abbey.

In 1738, Compton Domville’s nephew, Lord Santry, was tried by the House of Lords for the murder of a servant at an inn during the Fair of Palmerston. He was found guilty, but Compton Domville threatened to cut off the city’s water supply if his nephew was executed. There was no surprise when Lord Santry was granted a reprieve and subsequently a full pardon.

By 1780, Templeogue House was in a bad state of repair. In the 1820s, a tenant named Gogarty demolished the Domville family’s house and built a new house into which he incorporated the original mediaeval vaulted undercroft and the two circular towers of Templeogue Castle. From 1842 to 1845, the novelist Charles Lever lived in Templeogue House.

Today, Templeogue Village is mainly a centre of new houses and shops, and the old village has almost disappeared. 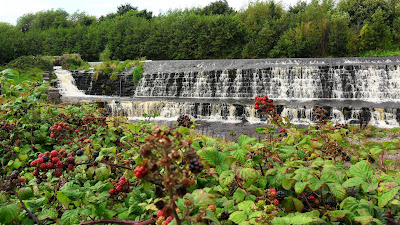 The blackberries are coming to full fruit at Firhouse Weir (Photograph: Patrick Comerford, 2010)

From the old mediaeval monastic site, I walked on along Spawell Road and under the M50 bridges to the weir at Firhouse, which is said to have been built originally by the Augustinian canons of Saint Thomas’s Abbey to divert the waters of the River Dodder into the City Watercourse. Obviously, the Augustinian canons had a more benign attitude to the people of Dublin than that of Sir Compton Domville.

I had no walk on a beach last weekend, and had been to my GP this afternoon for the monthly injection I need for my B12 deficiency and to discuss my continuing sarcoidosis. But the walk from Templeogue through Spawell and Firhouse to Knocklyon boosted my feelings of wellbeing. The blackberries are coming to full fruit along the footpaths and at the footbridge at Firhouse Weir, and in the warmth of the afternoon sunshine it was difficult to realise that autumn has already arrived.

Patrick Comerford is Director of Spiritual Formation, the Church of Ireland Theological Institute, and a canon of Christ Church Cathedral, Dublin
Posted by Patrick Comerford at 19:11 No comments: