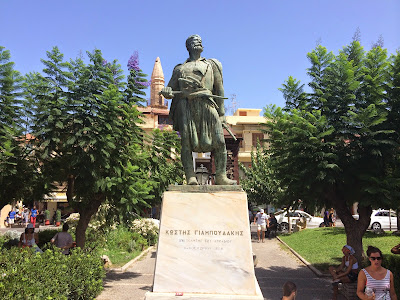 The Brascos Hotel where I am staying in Rethymnon looks out to the west on the Municipal Gardens and to the north to Platia Tesseron Martiron with the new Church of the Four Martyrs. They were martyred on this spot in 1824, and the church to which they give their name was dedicated in 1975.

In this small square, hidden behind the summer growth and green foliage, is a statue to Kostis Giamboudakis, one of Crete’s symbols of self-sacrifice and freedom from the revolution of 1866-1869.

Kostis Giamboudakis (Κωστης Γιαμπουδακης) was born in Adele, a village 11 km to the east of Rethymnon, along the coast. On my way to Rethymnon from Iraklion late last night, Adele looked just like any other resort on that long sandy stretch of beach, catering for all the pleasures and needs of sophisticated (and less sophisticated) tourists. 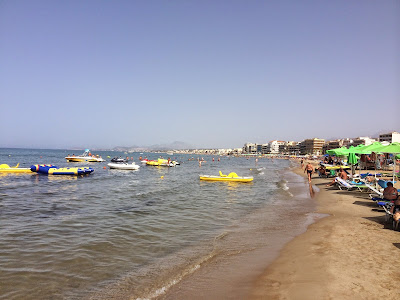 The beach and resorts in Rethymnon stretch east to Adele and beyond (Photograph: Patrick Comerford, 2014)

I spent a few hours this afternon on the long sandy beach in Rethymnon. But back in the 1860s, Adele was a simple village, and Giamboudakis is said to have been a simple villager who had a big heart and a great love for freedom.

When the revolution against the Turks broke out in 1866, Giamboudakis moved his family to the village of Meronas in the prefecture of Amari to ensure their safety. He then left for the monastery of Arkadi.

Bidding his family goodbye, Giamboudakis said: “Farewell forever. I will go to Arkadi and I will fight to death. I will never surrender to the Turks.”

He then left for Arkadi … and never returned. He set the fire in the gunpowder storage room in Arkadi Monastery in November 1866 and won glory for himself and the island of Crete.

On the night of 7 and 8 November, an army of 15,000 Turks and 30 cannons took up positions on the hills around the monastery. A last request for surrender was met with gunfire, and the assault began. On the evening of 9 November, the Ottoman cannons destroyed the doors and the Turks entered the building, suffering further losses.

But the Cretan fighters were running out of ammunition. As the attackers poured in, the ammunition stored in the monastery exploded. The majority of the women and children had hidden themselves in the powder room.

A popular version of the story says Giamboudakis from Adele gathered the villagers together and when the Turks arrived at the door of the powder room he set the barrels of powder on fire. It was the ultimate expression of the rallying cry of the Greek War of Independence: “Ελευθερία ή θάνατος, Freedom or Death.”

Of the 964 people who were there at the start of the assault, 846 were killed in combat or at the moment of the explosion; 114 men and women were captured; three or four escaped in the search for reinforcements; and 114 survivors were captured and sent to Rethymnon as prisoners. The women and children were held in the Church of the Presentation of the Virgin, the men were imprisoned for a year in difficult conditions.

The bodies of many of the dead Cretans were later placed in the windmill, which became a reliquary. The Turkish losses are estimated at 1,500. They were buried without memorials or their bodies were thrown into the gorges.

The massacre at Arkadi provoked international indignation and outrage, Giuseppe Garibaldi urged his supporters to join the Cretan struggle, Victor Hugo wrote comparing the drama at Arkadi with the destruction of Psara and the Siege of Missolonghi, and money was raised in Britain to send a ship, the Arkádi, to run the Turkish blockade.

A century and half later, the statue of Giamboudakis on the outer edge of the old town is ignored by most tourists who pass by. The few who notice it, find its steps a welcome place to sit and take a breather.

Instead, more attention is given to a modern, wooden replica of the old Venetian clock tower, erected near the Loggia in 1601, but demolished during World War II during work to extend Arkadíou Street – the name of the street recalls the monastery and its place in the struggle for Cretan independence. 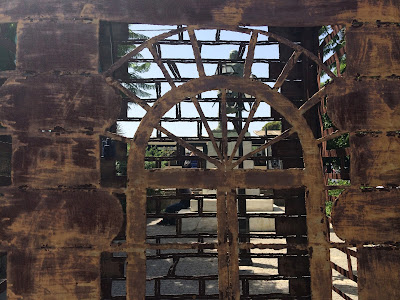 Looking at the statue of Kostis Giamboudakis through the wooden replica of the 17th century Venetian clock tower in Rethymnon (Photograph: Patrick Comerford, 2014)