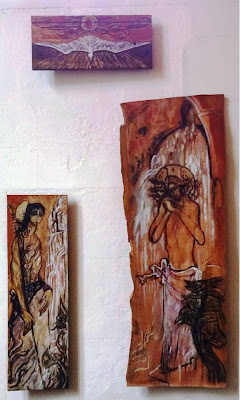 The Triptych of the Baptism of Christ in the Chapel of Saint John’s Hospital, Lichfield (Photograph: Patrick Comerford, 2014)

In this tutorial group, in our weekly Bible studies, we are looking at the Gospel reading in the Revised Common Lectionary for the Sunday after next.

9 In those days Jesus came from Nazareth of Galilee and was baptized by John in the Jordan. 10 And just as he was coming up out of the water, he saw the heavens torn apart and the Spirit descending like a dove on him.11 And a voice came from heaven, ‘You are my Son, the Beloved; with you I am well pleased.’

12 And the Spirit immediately drove him out into the wilderness. 13 He was in the wilderness for forty days, tempted by Satan; and he was with the wild beasts; and the angels waited on him.

14 Now after John was arrested, Jesus came to Galilee, proclaiming the good news of God, 15 and saying, ‘The time is fulfilled, and the kingdom of God has come near; repent, and believe in the good news.’

Putting the readings in context:

The Gospel reading, in a style so typical of Saint Mark’s Gospel, tells four stories, one immediately after the other, in short, pithy, summarised ways, punctuated with the word καὶ (‘and’): the Baptism of Christ in the Jordan; the 40 days Christ spends in the wilderness; the arrest of Saint John the Baptist, and the beginning of Christ’s ministry in Galilee.

The theme of 40 days in the wilderness makes an obvious connection with the start of the Season of Lent. But first we should ask how the readings connect with the Gospel theme and with Lent too? How do we put them in context?

The Old Testament reading comes immediately after the Flood. The waters have receded, and Noah, his family and the remaining animals have set foot on dry land. Immediately before this reading (Genesis 9: 1-3), God renews the promise made at creation (Genesis 1), and again gives the commands: “Be fruitful and multiply.” With this is a warning about the need to show respect for all human life: because humanity is made in the image of God, wilful bloodshed must be accounted for to God (verses 5-6).

God makes a “covenant” (verse 9) with Noah, his sons and “every living creature” (verse 10). Because it is from his sons that “the whole earth” (verse 19) shall be “peopled,” the agreement is between God and all humanity. He will never again destroy humankind (verses 11, 15, 16). This covenant is with with all creatures and with “the earth” (verse 13) itself, and it is an “everlasting covenant” (verse 16).

Ancient people imagined a rainbow as a divine warrior’s weapon, his “bow” (verse 13), and that the flashes of lighting were his arrows. But God turns this around and instead makes the bow as a visible sign of the covenant. God’s “bow” is in the clouds, not on earth, showing us that God is no longer angry with humanity. When the rains come, they will not continue ceaselessly any more but shall end with a rainbow, which is now a sign of hope. The story of the Flood teaches us that God judges the world according to human behaviour, punishes evil, and rescues the worthy.

The psalmist prays that God will show him his way (verses 4, 8 and 9) and his “paths” (verses 4 and 10). He trusts in God (verse 2), and hopes that God will deliver him from his personal enemies. May none who trust in God be shamed or be subject to treachery. Instead, those who follow God’s ways will be saved (verse 6). The psalmist trusts that God will forgive his sins through his mercy and love. May God remember his present fidelity rather than his youthful deviances (verse 7). God instructs sinners (verse 8), and leads and teaches the humble and those who respect him (verse 9).

Before this reading, the author writes: “Always be ready to make your defence to anyone who demands from you an accounting for the hope that is in you ... Keep your conscience clear, so that, when you are maligned, those who abuse you for your good conduct in Christ may be put to shame” (verses 15-16). We are called to do more than defend ourselves: we are to respond to any request for an explanation of our “hope,” engage the outsider in conversation, even though this may lead to suffering, for which Christ is the example.

Christ suffered for the sins of us all (verse 18). He is “the righteous,” and he brings us to God. He really died (“in the flesh”), but he overcame death and rose to new life. In verses 19-20, the reader is reminded of the story that angelic beings had intercourse with women, and so broke the boundary between heaven and earth (see Genesis 6: 1-4). In late Judaism, people believed that this action provoked the Flood. In I Enoch, an apocryphal book known when this epistle was written, Enoch goes on God’s behalf to tell these beings that they are confined to prison. The story of Enoch is applied to the risen Christ in verse 19, and the “spirits in prison” are these bad angels.

During the building of the ark, God waited patiently for humanity to turn to him, but no-one did (verse 20). The eight people are Noah, his wife, their three sons, and their wives. Then in verse 21 we are told how baptism also involves water, but in a different way. Its role is not ritual cleansing (“removal of dirt”); baptism saves us, putting us in a condition to be found worthy by God at the Last Day (“appeal”), sharing as we do in Christ’s death and resurrection. Christ has gone to heaven, and is in God’s place of honour (on his “right hand”, verse 22), and has angelic beings (“angels, authorities, and powers”) subject to him. God saved people in the past; now he saves us through baptism.

John the Baptist has come, “proclaiming a baptism of repentance for the forgiveness of sins” (verse 4). Many have taken the opportunity to start new lives in God. Jesus, too, is baptised by John – Mark does not tell us why. The opening of the heavens symbolises the start of a new mode of communication between God and humanity.

The description of the Holy Spirit “descending like a dove” (verse 10) recalls the Spirit hovering over the waters of creation in Genesis 1: 2. For Saint Mark, the “voice ... from heaven” (verse 11) confirms the already existing relationship between God and Christ.

Saint Matthew (Matthew 4: 1-11) and Saint Luke (Luke 4: 1-13) describe Christ’s temptation in the wilderness in detail, but Saint Mark mentions it only briefly. All three synoptic Gospels say that Christ overcame tempting and enticement by the devil. Satan (verse 13) is the supreme demon whose kingdom is now ending. The forty days (verse 13) recalls Israel’s 40 years in the “wilderness.” But it also echoes the 40 days of testing Moses endured when the covenant was renewed after the golden calf incident (Exodus 34: 28). Elijah also spent 40 days on Mount Sinai (see I Kings 19: 8).

The wilderness was probably the Judaean desert, which was regarded as the home of demons. There too, he was in danger of being attacked by wild beasts, but angels wait on him and protect him.

The word Saint Mark uses in verse 14 for arrest also occurs in the story of Christ’s passion and death. So Saint John’s fate foreshadows that of Christ.

Christ then returns to Galilee. His message begins with: “The time is fulfilled” (verse 15). This is the time appointed by God. The decisive time for God’s action has arrived. “The kingdom of God has come near” (verse 15). The final era of history is imminent, and Christ calls people to start a new life in God’s way, to “repent, and believe in the good news” (verse 15). We could say the whole of Saint Mark’s Gospel builds on this verse, and is an explication of it.

Is your Lent going to be an opportunity to be part of the new creation in Christ, a time to take account of your own hidden temptations, a time to explore your own wilderness places and to be aware of them, a time of preparation for the acceptance of the Kingdom of God?

Meanwhile, I have chosen a painting this morning to illustrate our Bible study – Driven by the Spirit into the Wilderness (1942), by the English painter Stanley Spencer (1891-1959).

This painting is inspired by a verse in this Gospel reading: “And the Spirit immediately drove him out into the wilderness” (Mark 1: 12). It is one a series of beautiful and compelling paintings, Christ in the Wilderness, produced by Spencer between 1939 and 1945, portraying the 40 days Christ spent in the wilderness.

Stanley Spencer was one of 11 children, born in in 1891 in Cookham, a small Thames-side village in Berkshire where his grandfather was the village builder. His father William was a professional musician and organist at a nearby church, with a passion for reading and discussing the Bible out loud with his family each evening.

Spencer was in the Royal Army Medical Corps in World War I with the field ambulances in Macedonia. It was an experience that had a profound effect on him as an artist, and the memories of war infiltrated his spirit.

Spencer became well known for his paintings depicting Biblical scenes occurring as if in Cookham, the village where he was born and lived much of his life. The best-known of these works must be The Resurrection, Cookham (1923-1927), which is clearly set in the village and with actual villagers portrayed taking part in Resurrection on Easter morning in the parish churchyard.

In 1938, Spencer moved to London and started working on the Christ in the Wilderness series in his bedsit in Swiss Cottage. In the 1950s, many of the paintings in the series were exhibited in Spencer’s parish church in Cookham. He died of cancer on 14 December 1959.

Almighty God, whose Son Jesus Christ fasted forty days in the wilderness,
and was tempted as we are, yet without sin:
Give us grace to discipline ourselves
in obedience to your Spirit;
and, as you know our weakness,
so may we know your power to save;
through Jesus Christ our Lord.

(Revd Canon Professor) Patrick Comerford is Lecturer in Anglicanism, Liturgy and Church History, the Church of Ireland Theological Institute. These notes were prepared for a Bible study in a tutorial group with MTh students on 11 February 2015.