‘It is easier for a camel to go
through the eye of a needle
than for someone who is rich
to enter the kingdom of God.’ 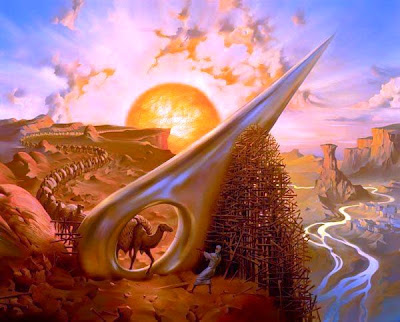 ‘The Eye of the Needle’ by Vladimir Kush

In recent weeks, I have been saying that it is neither custom nor practice here in Christ Church Cathedral to have a sermon, homily, or even a brief reflection at this mid-day Eucharist. And so I hope to be very brief and very short.

Over these past few weeks, we have all become conscious of the high-level of violence throughout the world, whether it is the conflicts in Gaza and Israel, in Syria, in Iraq, the conflict in Crimea and between Russia and Ukraine, or the other violent conflicts around the world.

One hundred years after the start of the ‘war to end all wars,’ war has become an every-day reality in many countries on every continent.

After those wars, there were efforts to introduce legal parameters for the conduct of war and legal guarantees for civilians who might innocently find themselves caught in the line of fire.

But today more people are being killed in violent, political conflicts around the world than in the conflicts of the 20th century.

The difference is that today the victims are often civilians, and sadly they are often quickly forgotten.

Do we only remember the violence in Afghanistan when we hear about the trafficking of refugees in containers?

What has happened to the kidnapped girls in Nigeria?

Who has been arrested for shooting down a civilian airliner over Ukraine?

Who will bring to trial those who have supplied weapons and training to the Isis murderers of civilians in northern Iraq?

Will no-one ever be charged with the murder of toddlers playing football on a beach in the Gaza Strip?

Are we only disturbed when the violence in conflicts spills over into risks to international air traffic and higher costs and longer flying times for business and tourist traffic?

Civilians – and children in particular – have become collateral damage, the forgotten consequences of war. I have heard one commentator saying: “War is War. People get killed.”

But all the international outrage after two World Wars was supposed to make sure that facile comments like this were never going to be possible again.

We have prayed in our Collect today “that we may bring forth the fruit of the Spirit in love and joy and peace.” But how do we find hope in this?

The Gospel challenges us to keep hope, and we are reminded of that challenge to keep hope in today’s readings for our Eucharist.

The rulers of the world who think they are invulnerable and above accountability set themselves up as gods. But the Prophet Ezekiel and the Psalmist warn rulers who depend on violence against people to prop up their power and their might that there are inevitable consequences.

In God’s own time, all things shall be renewed with the coming of the Son of Man and the Kingdom of God. Those who have been counted out will be counted in. Those who have been made homeless, those who have seen their brothers or sisters or father or mother or children killed and dismissed as mere collateral damage, those who have lost their fields or their livelihood, their schools and their hospitals, may have lost out in the human plotting and scheming of war and politics.

But eventually, in God’s plan they “will receive a hundredfold, and will inherit eternal life. But many who are first will be last, and the last will be first.”

Perhaps those who abuse power and wealth, and think they are being saved by their power, strength and privilege, will be happy to get down on their knees, like a camel, and squeeze into the City of God through the smallest and most narrow of doors, and find in the most humbling of ways how to get into the Kingdom of God.

Indeed, our Post-Communion Prayer looks forward to “that new world” where God reveals the fullness of God’s peace, and shall “gather people of every race and language to share in the eternal banquet of Jesus Christ our Lord.”

Holy Father, who gathered us here around the table of your Son
to share this meal with the whole household of God:
In that new world where you reveal the fullness of your peace,
gather people of every race and language
to share in the eternal banquet
of Jesus Christ our Lord.

Canon Patrick Comerford is lecturer in Anglicanism, Liturgy and Church History, the Church of Ireland Theological Institute. This reflection was shared at the Mid-Day Eucharist in Christ Church Cathedral, Dublin, on Tuesday 19 August 2014.