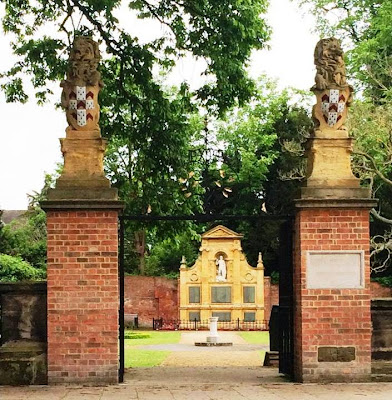 A rough stone (bottom right) marked with a cross and embedded in the gate posts of the Garden of Remembrance on Bird Street may be a surviving boundary stone in Lichfield (Photographs: Patrick Comerford, 2014)
Patrick Comerford

I was in Christ Church Cathedral, Dublin, this evening [29 May 2014] for the Cathedral Eucharist celebrating Ascension Day. However, nobody invited us out afterwards to beat the bounds of the cathedral parish, which includes many of the mediaeval parishes of Dublin, including Saint Werburgh’s, Saint Michan’s, All Saints’, and the former parishes of Saint Bride’s, Saint John’s, Saint Mary’s, Saint Mary-le-Dame, Saint Paul’s and Saint Andrew’s.

Traditionally beating the bounds ceremonies took place on Ascension Day or else during this week, which is also known as Rogationtide. The Sunday before Ascension Day is still known in some places as Rogation Sunday, and the three days before Ascension Day – Monday, Tuesday and Wednesday – are Rogation Days, “when prayer is offered for God’s blessing on the fruits of the earth and human labour. Walking the boundaries of the parish was a practical and incarnational opportunity to do this.

Beating the bounds was also an effective way of passing from one generation to another the traditions and memories of the precise limits of a parish. In times before maps and written title deeds, it was important for clergy and residents to know the physical boundaries of their parish.

Until 1834, the Poor Laws made the care of the poor the legal responsibility of a parish, and the parish was responsible for relieving the needy, supporting apprentice children and caring for the destitute in the parish. Parish poor rates were raised to pay for these responsibilities.

Those parish responsibilities in law included illegitimate children, and sometimes parish officials would try to remove pregnant unmarried women to other parishes – so they would not be responsible for the baby and would not have to increase the poor rates in the parish. In this way, the Poor Laws provided yet another reason for ensuring that everyone knew the boundaries of the parish.

Knowledge of the limits of each parish had to be handed down also so that liability for contributing to the repair of the church, and rights to be buried in the churchyard were not disputed.

In England, the custom of beating the bounds goes back to at least Anglo-Saxon times, and the tradition survives in some parishes. The custom involved walking around the parish boundary and beating it with a stick, or stripped willow branch known as a wand. In some places, stones, trees or other marker points around the boundary were also beaten by bumping a boy – often a choirboy – against the mark. 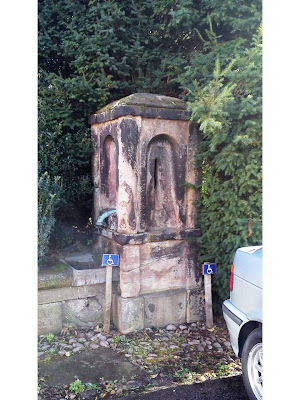 On Ascension Day, the houses had greenery pushed through their letter boxes in the morning. The procession would start at Saint Mary’s Vicarage and the stopping points included a well, the Bishop’s kitchen garden, the Dean’s kitchen garden, Dr Milley’s Hospital on Beacon Street, the boundary stone on the Minster Pool Bridge and the Verger’s house in the corner of the Close, before finally gathering at the old pump north-west of the Cathedral. 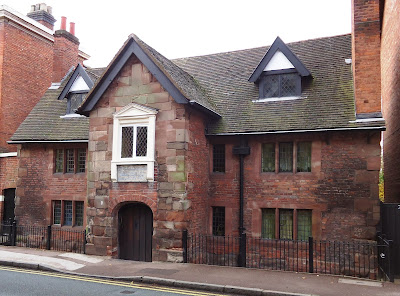 Dr Milley’s Hospital, Beacon Street ... one of the stopping points on beating the bounds in Lichfield in years gone by (Photograph: Patrick Comerford)
This was followed by a procession of clergy, choir and children carrying branches of elm collected in the Dimbles as they walked around the Cathedral and the Close. At set points, prayers were said, a Scripture passage was read and a hymn was sung. Finally, the elm boughs were brought into the Cathedral and laid on the font.

During my lecture and guided walking tour of the Cathedral Close earlier this month, the Lichfield blogger Kate Gomez of Lichfield Discovered and Joss Musgrove Knibb, Deputy Editor of the Lichfield Gazette pointed out a sandstone block carved with a cross and embedded in one of the gate posts of the Garden of Remembrance on Bird Street. They identified this as a surviving boundary stone.

Kate Gomez has also noted in her blog how the tradition in the Close seems to have been centred on wells and water. Perhaps this was because Rogation Days were marked by prayers for the fruits of the earth.

Lichfield is one of only eight cities in England that have parish status, the others being Chichester, Ely, Hereford, Ripon, Shrewsbury, Truro and Wells. In 1553, Queen Mary Tudor granted Lichfield a charter, separating Lichfield from Staffordshire to become “the City and County of Lichfield,” with its own mayor and sheriff. The charter commanded the sheriff to “perambulate the new County and City annually on the feast of the Nativity of the Blessed Virgin Mary, 8 September.”

Lichfield has long been reincorporated into Staffordshire, but this traditional “beating the bounds” takes continues on horseback, along an ancient 20-mile route around the city limits, starting at the Guildhall at 10.30 a.m., and passing Lichfield Cathedral, Minster Pool, Curborough Hall Farm, Freeford Manor Estate, where the Sheriff’s Ride traditionally stops for lunch, and Pipe Hall, where the riders stop for tea and cakes.

Returning to Lichfield, the Sheriff and riders are met by the Sword and Mace Bearers at about 6.15 p.m. to be escorted down Beacon Street to the Close where they are greeted by the Dean, before returning to the Guildhall at about 6.30 pm.

On Ascension Day in Cambridge, the clergy and parishioners of Little Saint Mary’s Church walk around the boundaries of the parish – which includes Coe Fen – as they sing hymns and psalms and pray for the residents of the parish and their activities.

In Oxford on Ascension Day, many colleges and several shops welcomes two groups of visitors carrying out the ancient tradition of beating the bounds. This provides an interesting conundrum for Brasenose, for the boundaries of the parishes of Saint Michael at the Northgate and Saint Mary the Virgin pass through the grounds of the college. Groups from both parishes visit the college on this day to mark the boundary stones by marking them with the year in chalk and striking them with willow wands.

In High Wycombe, the tradition involved parading around the parish boundary and bumping boys on their heads at special marker points along the route. The tradition was revived in 1985 as part of the town’s 700th mayoral anniversary, so that Beating the Bounds became Beating the Boys.

Outside England, there was a tradition in Jersey of the Visite Royal in which the parish boundaries were inspected by the magistrates of the island’s Royal Court.

Although I know of no tradition surviving tradition of beating the bounds in any parish in Ireland, it is said that in Cork the Lord Mayor, in full civic regalia, would throw a dart into the harbour each year, its landing-place marking the limit of the writ of the city corporation.

However, we threw no darts, cut no elm boughs and bounced no choir members off boundary stones within the cathedral group of parishes in Dublin today, and I doubt that many of us know the exact and precise limits of the parish boundaries.

But then, looking at the Church Notices in The Irish Times last Saturday, I imagine few cathedrals and parish churches in the Church of Ireland marked Ascension Day today. Yet this is one of the Principal Holy Days “which are to be observed,” according to the Book of Common Prayer (see p. 18), when the Eucharist is “celebrated in every cathedral and parish church,” with the understanding that the “liturgical provision” for this day “may not be displaced by any other observance.”


The Ascension ... a modern icon by Aidan Hart