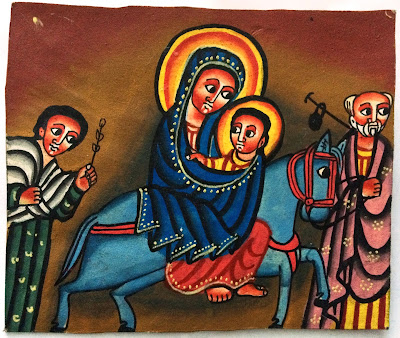 Saint Joseph leading the Virgin Mary and the Christ Child, followed by Saint James, on the flight into Egypt … an Ethiopian artists’s impression (Photograph: Patrick Comerford, 2015)

Saint Joseph is one of the truly enigmatic characters in the Gospel stories. He appears in both Saint Matthew’s Gospel and Saint Luke’s Gospel, but he is in neither Saint Mark’s nor Saint John’s Gospel. And after Mary and Joseph return from Jerusalem to Nazareth with the Child Jesus, Joseph disappears from the stage again.

The Gospels are silent when it comes to the details of Joseph’s life. We know not where or when he was born nor do we know where or when he died. Was he married before? Was he an older man? Was he the father of the brothers of Jesus – James, Joses, Judas and Simon – from an earlier marriage? Did he live on into old age? We do not know.

We do not even know what he worked at: Joseph was a τεκτων (tekton), which is traditionally translated as carpenter. But the Greek word applies too to an artisan with wood in general, or to an artisan in iron or stone, a builder or even an architect.

And if the Gospels are silent about the intimate details of Joseph, then Joseph too is silent in the Gospels. He has the worst part to play in the school nativity play … a walk-on part, but no lines to say. Joseph has no speaking parts at all. All we know is he lived in Nazareth in Galilee before the birth of Christ (Luke 2: 4).

Joseph does not speak. Instead, Joseph dreams and Joseph listens. He listens to the angel who tells him not to divorce Mary (Matthew 1: 20-21), and does what the angel of the Lord tells him (Matthew 1: 24). When the law commands it, Joseph takes his pregnant wife to Bethlehem (Luke 2: 4), and there the child is born.

After the birth of Christ, Joseph listens to an angel in another dream – and, silently, he does as he is told, and without mumbling or grumbling gets up and takes the Mother and Child into Egypt (Matthew 2: 13-14).

When Herod dies, Joseph is told by the angel in yet another dream to return with Mary and Jesus from Egypt (Matthew 2: 19-21).

Then Joseph learns in a fourth dream that Herod Archelaus is in power in Judea, and he is warned in a dream to move to Galilee. And so, Joseph takes the mother and child to Nazareth and they settle there (Matthew 2: 21-23).

The last time Joseph appears is when the family visits the Temple in Jerusalem at Passover, when Jesus is about 12 (Luke 2: 41-52). When the Gospel writers resume telling the story of Christ’s life, after the hidden years, the Virgin Mary is present at some events, but there is no mention ever again of Joseph.

Did he hear Jesus preach in the synagogue?

Did he see him heal?

Was he too at the Wedding at Cana?

We do not know.

Like his namesake Joseph in the Old Testament, Joseph in the Gospels is a dreamer. Most dreamers are good on ideas but weak on delivery, dreamers but not doers. Saint Joseph, on the other hand, is both a dreamer and a doer.

What if Joseph had rolled over and had another 40 winks after each of those dreams?

What if Joseph said No at each turn?

At different times, we have all pondered Mary’s potential “No” at each turn. But, what if Joseph said No, had divorced Mary, left Jesus to be brought up by a single mother?

What if Joseph decided to stay at home and Jesus was born in Nazareth?

What if Mary and Jesus moved back from Egypt to Bethlehem or Jerusalem, and became victims of the murderous schemes of Herod Archelaus?

What if Joseph and Mary had failed to find the teenage Jesus when he got lost in the Temple?

We often think that dreamers need to take their heads out of the clouds and set their feet back firmly on the ground. We often think that those who have little to say have little to contribute. Joseph proves how wrong we can be. Joseph is a dreamer and Joseph is a doer. Joseph plays a key role in the great story of salvation. Does it matter what he does afterwards? No. It just matters that he did what he was asked to do. We leave the rest to Jesus. 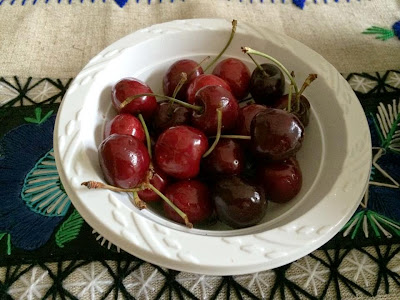 Is life just a bowl of cherries? ... ‘The Cherry Tree Carol’ is a traditional English carol dating back to the early 15th century (Photograph: Patrick Comerford)

Each morning during this Season of Christmas, I am reflecting on an appropriate hymn or carol. This morning [3 January 2015], I have chosen ‘As Joseph was a-walking.’ This is a beautifully serene and atmospheric setting of traditional words on the prophecy of Christ’s birth as told to Joseph by the angel, and is traditionally known in England as ‘The Cherry Tree Carol.’

This carol is No 148 in the Irish Church Hymnal. This old English carol, which dates back to the Coventry Mystery Plays. It was performed in Coventry ca 1400 during the Feast of Corpus Christi, and was still being sung in many parts of England more than 450 years later.

Later, William Studwell pointed out that there is not a single “Cherry Tree Carol” but rather three separate folk carols that were later merged. Even among these three carols there is considerable variation in the lyrics. The editors of The New Oxford Book of Carols say there may be at least eight texts.

Some researchers point to the widespread use in folklore of the gift of a cherry, or similar fruit carrying its own seed, as a divine authentication of human fertility. There is also a link between Eve eating the fruit in the Garden of Eden before the Fall, and Mary eating cherries and whose son would erase the transgression. Some versions have Mary and Joseph walking through a garden, rather than an orchard, reinforcing the motif of the Garden of Eden.

Chapter 20 of the apocryphal Gospel of Pseudo-Matthew tells a story that during their flight into Egypt, Mary sits beneath a palm tree and desires its dates, but is unable to reach them. Joseph is unable to climb the tree, but when Jesus intervenes, the tree bows down to give Mary the fruit.

Most versions of this carol follow a similar pattern: when Saint Joseph refuses to retrieve the fruit of the tree for the Virgin Mary, Christ intervenes from the womb and the tree bows down to deliver the fruit to the Virgin Mary.

However, in one version of ‘Joseph Was An Old Man,’ Saint Joseph commands the tree to bow to the Virgin Mary – and it does. In ‘Joseph Were A Young Man,’ it is Christ himself who issues the command.

As Joseph was a-walking,
he heard an angel sing,
‘This night there shall be the birth time
of Christ our heavenly King.

‘He neither shall be born
in housen nor in hall,
nor in the place of Paradise,
but in an ox’s stall.

‘He neither shall be clothed
in purple nor in pall,
but in the pure white linen
as usen babies all.

‘He neither shall be rocked
in silver nor in gold;
but in a wooden cradle
that rocket on the mould.”

As Joseph was a-walking,
there did an angel sing,
and Mary’s child at midnight
was born to be our King.

Then be ye glad, good people,
this night of all the year,
and lift your hearts in joyfulness,
his star it shineth clear.

Another version was versified by Charles Wesley, the author of The Water Babies, who has Amyas sing this carol in Westward Ho!:

As Joseph was a-Walking by Charles Kingsley (1899)

As Joseph was a-walking
He heard an Angel sing –
‘This night shall be the birth night
Of Christ, our Heavenly King.

“His birthbed shall be neither
In housen nor in hall,
Nor in the place of paradise,
But in the oxen’s stall.

“He neither shall be rocked,
In silver nor in gold,
But in the wooden manger
That lieth on the mould.

“He neither shall be washen
With white wine nor with red,
But with the fair spring water
That on you shall be shed.

“He neither shall be clothed
In purple nor in pall,
But in the fair white linen
That usen babies all.”

As Joseph was a-walking
Thus did the angel sing,
And Mary’s Son at midnight
Was born to be our King.

Then be you glad, good people,
At this time of the year;
And light you up your candles,
For His star it shineth clear.

This version was set to music by Lydia Avery Coonley Ward (1845-1924), who wrote tunes for many carols, including ‘Why do bells for Christmas ring?’

Tomorrow: ‘As with gladness men of old’