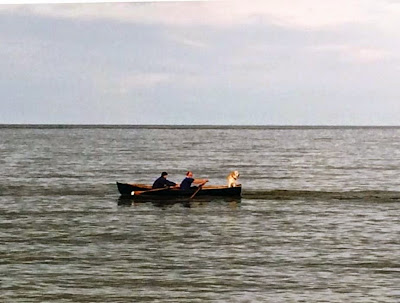 Two men and a dog in a boat, rowing parallel to the shoreline in Bray this afternoon (Photograph: Patrick Comerford, 2014)

When the English writer Jerome K Jerome published his book Three Men in a Boat in 1889, the original title was Three Men in a Boat (To Say Nothing of the Dog). It was an account of a boating holiday on the Thames, between Kingston upon Thames and Oxford, and was also intended as a serious travel guide, with discussions of the history of places along the route such as Hampton Court Palace, Hampton Church, Magna Carta Island, Monkey Island, and Marlow.

Instead, his witty and humorous account of a boating holiday on the river, with its jokes and its unguarded humour, turned a serious travel book into a comic novel.

The three men are based on Jerome and two of his friends, George Wingrave and Carl Hentschel. But the dog, a fox terrier named Montmorency, is a fictional creation of the writer.

This afternoon a say two men in a boat with a dog enjoying the journey between Bray Head and the marina at Bray. They came around Bray Head, and rowed parallel with the full length of the beach, with a rainbow behind them in the Irish Sea, and glimmers of light cast across the water as the sun began to set behind the houses and hotels on the Promenade and further to the west.

The men were working hard as the rowed persistently and consistently. But their present-day Montmorency seemed to be enjoying himself, wagging as his tail as he watched the waves roll and break against the shoreline.

All three, two men and a dog, seemed oblivious to the small number of people walking on the sand in the late afternoon and the two small children in swimming togs throwing stones into the sea.

It has been a long working week with the part-time students, following immediately after a city break in Lisbon. And, after a week-long reading week, the full-time students return tomorrow morning for the second half of this semester. 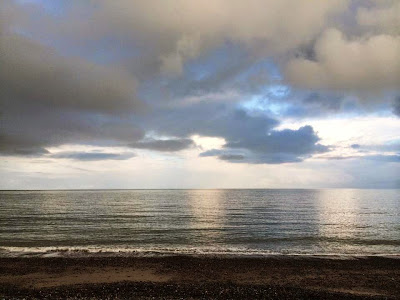 Winter sunshine on the sea in Bray this afternoon (Photograph: Patrick Comerford, 2014)

Later this afternoon, two of us went for that walk on the beach in Bray. Although the end of summer time a few weeks ago means the evenings are now closing in quickly, there were startling evening lights in the sky this afternoon.

Later, we had dinner in El Greco on Main Street in Bray, where there was a warm welcome from the proprietors, Prokopis (Steve) Kaludis and Mona Sararoiu, who opened this restaurant last February.

As winter closes in, it was good to have a taste of Greece and a promise of summer this evening. 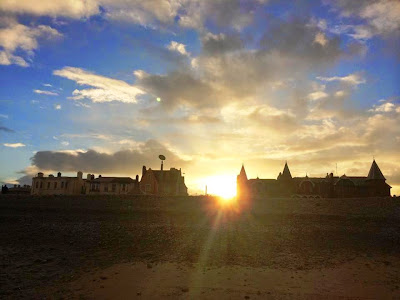 Sunshine and shadows in Bray this evening (Photograph: Patrick Comerford, 2014)

A service of the word and hymns
to mark Remembrance Sunday 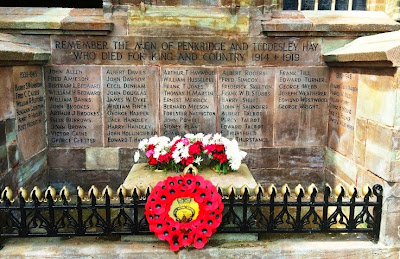 A wreath of poppies at the war memorial at the Church of Saint Michael and All Angels in Penkridge, Staffordshire (Photograph: Patrick Comerford, 2014)

At the end of a busy working weekend, I am presiding at the Eucharist in the Church of Ireland Theological Institute this morning [9 November 2014].

This is the Third Sunday before Advent and Remembrance Sunday.

For the Liturgy of the World, we are using ‘A Service of the Word for a commemoration of the First World War,’ prepared by the Liturgical Advisory Committee, and for which I wrote the introduction: 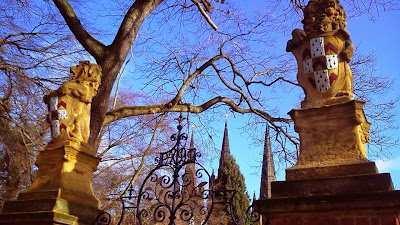 Our opening hymn this morning is ‘In Christ there is no east or west’ (Irish Church Hymnal, No 522). This hymn was first written by John Oxenham (William Arthur Dunkerley) for a mission conference in London in 1908, but he rewrote the hymn which appeared in different editions in 1913 and 1924 so that it now reflects the theme of Christian unity but also speaks out against the barriers and discriminations based on race, creed, class, culture, tradition and gender.

The tune ‘Clonmel’ is said to be an old Irish traditional melody, and in some parts of Ireland it is associated with the 1798 ballad ‘The Boys of Wexford,’ but has been arranged for this hymn by George Petrie, CV Stanford and Donald Davison.

After our act of commemoration and silence, we sing ‘O God, our help in ages past’ (Hymn 537), a hymn associated by many with Remembrance Day commemorations. It was written by Isaac Watts as paraphrase of Psalm 90: 1-6, and was later revised by John Wesley. The words of the hymn have become inseparable from the tune ‘St Anne.’ The words and the tune were first linked by William Henry Monk, the musical editor of Hymns Ancient and Modern, and the tune was later harmonised by Sir Arthur Sullivan, of Gilbert and Sullivan fame and the son of an Irish-born bandmaster and music teacher.

Our Offertory Hymn, ‘Your kingdom come O God’ (No 509), is by Canon Lewis Hensley, and although written at a time of relative peace is prophetic when to comes to talking about war and tyranny.

Our final, Post-Communion Hymn is ‘Lord, for the years’ (No 81), written by Timothy Dudley-Smith for a service in Saint Paul’s Cathedral, London, marking the centenary of the Scripture Union, founded in 1867, and the tune was written by Michael Baughen, later Bishop of Chester. Later, it was used widely at services in 1995 to mark the fiftieth anniversary of the end of World War I.