Among the saints in the sunshine

Saint Chad, among the kings and saints on the west front of Lichfield Cathedral ... Bede says he travelled to Ireland as a monk after studying in Lindisfarne and before he was ordained as a priest(Photograph: Patrick Comerford, 2012)
Patrick Comerford

I am staying for the weekend at the Hedgehog in Lichfield, and the room I have been given, No 1, is called Saint Chad.

At Choral Evensong in Lichfield Cathedral this evening [25 May 2012], the Precentor, Canon Wealands Bell, reminded us that today we have been remembering the Venerable Bede, the Monk of Jarrow who is remembered as one of the earliest historians in England. And he told us how Bede is also our principal source for the life of Saint Chad, who is so intimately associated with the early story of Lichfield Cathedral and the Diocese of Lichfield.

Saint Chad takes centre place in the rows of saints and kings carved on the West Front of Lichfield Cathedral. But, despite popular perceptions, he was neither the first Bishop of Lichfield, nor was he the founder of the diocese.

The Diocese of Mercia was founded 656 by Diuma, and he and the first four bishops were either Irish or were educated in Irish monasteries and by Irish monks.
Bede says the first bishop, Diuma (or Dwyna or Duma), was Irish and that he was one of the four priests introduced to Mercia in 653 by Peada, son of King Penda of Mercia. Peada had become a Christian, and after Penda’s death, Diuma was consecrated bishop after 655 by Finan, Bishop of Lindisfarne. But while he was Bishop of Mercia, he had his seat at Repton. We do not know the date of his death.

Diuma’s successor, Ceollach (or Cellach) was born in Ireland. He left the diocese or resigned, and moved to the monastery of Iona before his death.

The next bishop, Trumhere (or Thumhere), was born in England but was educated in Ireland. He was the first Abbot of Gilling , founded on land donated by King Oswiu of Northumbria as penance for the death of King Oswine of Deira. When Trumhere was chosen as Bishop of Mercia about 658, he was consecrated by a Celtic bishop. He died about 662.

The fourth Bishop of Mercia, Jaruman (or Jarumann), was from Ireland too, although he was educated at Lindisfarne. He was involved in several missions to Saxon tribes before he died in 669. Some scholars suggest his name inspired JRR Tolkien when he named Saruman in The Lord of the Rings. 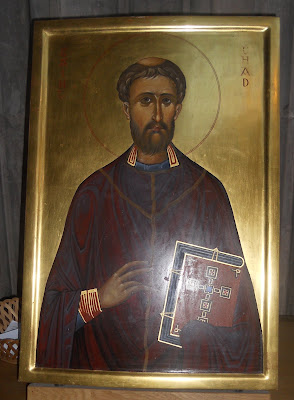 Saint Chad was Jaruman’s successor as the fifth Bishop of Mercia, and he became the most prominent bishop in the history of the diocese. However, most of what we know about the saintly Chad comes from the writings of today’s saint, the Venerable Bede, who credits Saint Chad and his brother Cedd with introducing Christianity to the Mercian kingdom.

Bede tells us Saint Chad spent his early life as a student of Saint Aidan in the Celtic monastery in Lindisfarne, and Bede says the general pattern of Saint Chad’s ministry was shaped by the example of Saint Aidan, who was a disciple of Saint Columba and came to Northumbria from Iona.

Although Saint Chad was probably from an Anglo-Saxon family, he travelled to Ireland as a monk after studying in Lindisfarne and before he was ordained as a priest. Chad and Egbert were among a group of English scholars who went to in Ireland while Finan and Colmán were Bishops in Lindisfarne, so their arrival in Ireland was some time after Saint Aidan’s death in 651. So Saint Chad’s time in Ireland was between 651 and 664.

Saint Chad was the abbot of several monasteries, and then Bishop of the Northumbrians before becoming Bishop of Mercia. When Saint Chad became bishop in 669, he moved the seat of the diocese to Lichfield, and the diocese then took its name from the city. Saint Chad died on died 2 March 672.

In 691, the area was divided to form the smaller dioceses of Lichfield, Leicester, Lichfield, Lincoln, Worcester and Hereford. Later, Lichfield was briefly the seat of an archbishop from 787 to 799, with provincial authority in the Kingdom of Mercia and from the Humber to the Thames.

The bishop’s seat moved briefly to Chester in 1075, and then to Coventry in 1102, and from 1228 the bishops were known as Bishop of Coventry and Lichfield, with cathedrals in both places. 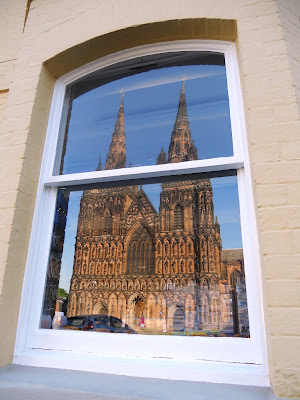 Some of the Deans of Lichfield from that time also had Irish connections: Stephen Seagrave (1319-1324) and Richard FitzRalph (1335-1346) later became Archbishops of Armagh.

At the time of the Anglican Reformation, Rowland Lee was said to have secretly married King Henry VIII to Anne Boleyn, the second of Henry’s six wives, on 25 January 1533. Ten days earlier it had been discovered she was pregnant with the future Elizabeth I. A year later, perhaps with little surprise, Rowland Lee was rewarded for his efforts and became the Bishop of Lichfield.

After the Reformation in the 1530s, the cathedral in Coventry was demolished, and from the Restoration of Charles II in 1660 the bishop was styled Bishop of Lichfield and Coventry. In 1837, the diocese was divided once again – the Coventry area was transferred to Diocese of Worcester and later became a separate diocese. Since then, the bishops have been known simply as Bishop of Lichfield.

Although it is difficult to say that there is anything simple about ecclesiastical life in Lichfield.

After Choral Evensong, I strolled around the Cathedral Close, back up Beacon Street and up Cross in Hand Lane, before returning to the Hedgehog, where I sat out in the late evening sun for dinner.

Morning coffee with an old, old friend in Lichfield

The sunshine is beautiful in Lichfield today. I sat outside Nero in Bore Street this morning with a double espresso and this week’s edition of the Lichfield Mercury.

I am staying in the Hedgehog at the junction of Stafford Road and Cross in Hand Lane, and after my morning coffee at Nero in Bore Street, I noticed the Lichfield Mercury has closed its former offices around the corner in Breadmarket Street, between the houses where Lichfield’s most famous writer, Samuel Johnson, and the antiquarian Elias Ashmole were born. 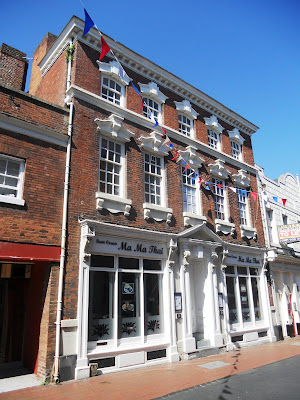 The Ma Ma Thai restaurant at No 17 Bird Street ... once the home of the Lichfield Mercury (Photograph: Patrick Comerford, 2012)

Walking down Bird Street later this morning, I passed Ma Ma Thai Restaurant at No 17, close to the corner of Sandford Street, and opposite the George Hotel, I cast a wistful glance at the building that once housed the former editorial and advertising offices of the Lichfield Mercury.

Forty years ago, in the early 1970s, I was a freelance contributor to the Lichfield Mercury, its sister title, the Rugeley Mercury, and another local newspaper, the Tamworth Herald.

For a short time after, I continued to contribute occasionally to the Lichfield Mercury and to visit those premises in Bird Street – and the King’s Head, just two or three doors away.

This three-storey house was built in the early or mid-18th century in the Early Georgian style, with a symmetrical five-window range. The entrance has a door-case with architrave with triple key, panelled pilaster strips and consoled pediment, and paired two-panel doors. The two shop windows have panelled pilaster strips and consoled cornices, while the first floor has windows with panelled sills and shaped aprons, and shaped lintels with keys and cornices over 6/9-pane sashes with thick glazing bars.

Inside, in what was the front room of a once-elegant residence, there are end fireplaces, each with panelled pilasters and lintel with fluted key, breast with fluted angle pilasters. There is some tall fielded panelling with a panelled dado rail. The dog-leg staircase has cut string with column-on-vase balusters and a ramped handrail, with dado panelling.

This beautiful building was lovingly mentioned by the late Sir Nikolaus Pevsner in 1974 in his Staffordshire, in which he talks of its “nicely enriched window lintels and rather a wild door surround.”

I was welcomed back in 1974 to see the process, and to learn about how the pages of the newspaper were designed and made up. I probably thought then that I was going to find a fulltime position with the Lichfield Mercury and return to live in this cathedral city. I never did, but I was always grateful for those opportunities and that generous sharing of skills and insights – they later proved useful when I was with The Irish Times. 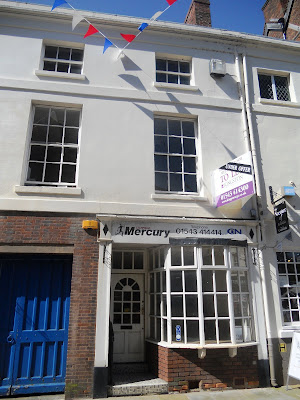 The Lichfield Mercury is now published by Tamworth-based Central Independent Newspapers, which are not independent at all but are owned by Northcliffe Media, the regional newspaper division of the Daily Mail.

The cover price of Lichfield Mercury today is 50 p, but most homes receive it as a weekly free-sheet tabloid. It is published on Thursdays and is delivered to homes in Lichfield and other towns in south-east Staffordshire, including Armitage, Barton-under-Needwood, Brownhills and Burntwood, and has a circulation of about 38,000.

Burntwood has its own local sub-edition, the Burntwood Mercury, but the Rugeley Mercury ceased publication in late 2010.

The Mercury’s website at thisislichfield.co.uk was withdrawn last year. The newspaper no longer has its own website, and the old URL now redirects surfers to Northcliffe’s lichfieldpeople.co.uk website, to which the newspaper contributes news.

But, despite cutbacks and a shaky market for newspapers, the Lichfield Mercury continues to keep producing a decent local product. I hope it’s still there in three years’ time to celebrate its bicentenary.

Posted by Patrick Comerford at 12:33 No comments: